Get the app Get the app
AOPA will be closed July 4th, in observance of the Independence Day holiday. We will reopen at 8:30 am ET on Tuesday, July 5.
News & Media Mental gymnastics 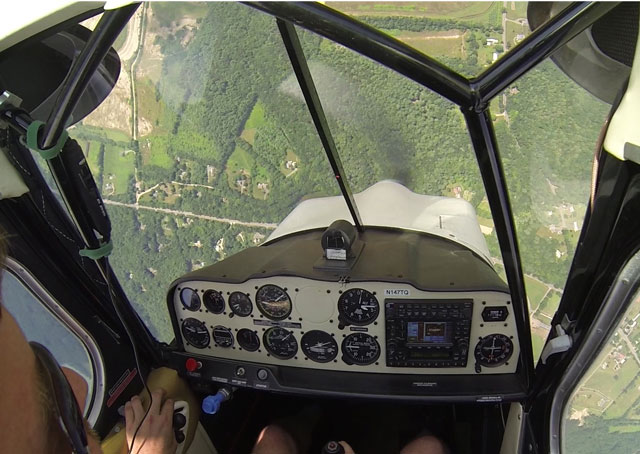 We talk to ourselves, dance when no music is playing, and try to keep our nerves under control in the cockpit—particularly when the judges are watching. None of this is easy, but it is often exhilarating.

On July 17, full of hope, I launched on my first aerobatic contest flight without a safety pilot in the back seat. The weather was near enough to perfect, my heart was (comparatively) calm, and my head clear of everything but the task ahead. The American Champion Super Decathlon climbed exuberantly on half tanks, and the hills around Hartness State Airport in North Springfield, Vermont, fell away below. The chief judge wished me a good flight, as always, and cleared me into the aerobatic box, the stage on which we compete. I dove for speed too soon, and found myself back to level, still a few hundred feet to go, heading upwind and bleeding airspeed. Not the best possible start when the first figure requires a stiff pull to vertical that can set the needle at the 5-G mark.

Why, I wondered silently, do I do this to myself?

Maybe I even said it out loud. I’ve been teaching myself to talk out loud in the cockpit, to call out figures and speeds and cadences even when nobody else can hear.

Flying contests is a lot of fun, and it’s rewarding in many ways. There is the camaraderie of interesting pilots who tend to have good stories to tell, and who all share a dedication to pursuing ever-elusive perfection. There is the challenge of the flying itself, and nailing so much as a single figure (maneuver) is exhilarating. I imagine that flying a beautiful sequence will top that. Competition has also taught me a lot about myself, highlighting weaknesses in sharper relief, perhaps, than other forms of flying. Chief among those weaknesses, I tend to get pretty keyed up for a challenging flight—whether it’s acro or a stiff crosswind. Learning to better manage stress and pressure, whether exerted from within or without, is perhaps the greatest benefit of competition flying.

Funny things have a way of happening when the judges are watching. I’ve been known to drag a foot on the rudder for no good reason, turn the wrong way, and even forget an entire figure. If that happens to be a figure that includes a change of direction, the zeros will add up quickly on the score sheets. On this particular day, I managed to avoid these, though there were many sixes and sevens, reflecting deviations of a few degrees here or there, loops less than perfectly round, rolls that dished at the end or ended off-heading. It is not for lack of knowledge that relatively inexperienced competitors like myself make these mistakes—we know, by the time we get to a contest, how to fly each figure properly. But when the sequence begins with judges watching from below, it is a struggle for many of us to fly as well as we do in practice (I asked around). 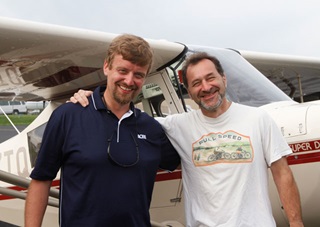 Bob Cipolli, a friend, mentor, and aerobatic instructor who has taught me most of what I know about competition flying, disputes the notion that this should be a chronic problem. He points out that professional athletes are rarely mediocre in a big game—it’s either the pinnacle of their performance, or abysmal—“there’s no middle ground,” he said in a recent post-flight chat. He’s won his share of contests, flying at the highest level of International Aerobatic Club competition (Unlimited), and prepares those mind-boggling sequences in practice sessions treated like they were competition flights, down to the details. Each practice flight includes one—and only one—complete sequence, with the balance of the time spent working on individual figures. It’s a strategy to trick the mind, to replicate the pressure of a contest flight so that when the day actually comes, focus does not suffer.

Eric Lentz-Gauthier, currently preparing for the World Glider Aerobatic Championships in the Czech Republic, offered a slightly different strategy in an email exchange: Identify the weak spots, the maneuvers that pose particular challenges, and work on them relentlessly. Make the practice flights a little more challenging; insert variations and even entirely new maneuvers.

“Make yourself a sequence that is more complicated than what you'll have to fly in the contest to get your brain up to speed with weird orientation problems,” he wrote.

Both of these approaches are proven, though in each of the four contests I’ve flown to date, the sharp focus and ability to dispense with the white noise that clouds the mind when it's time to perform have built more slowly than I might like. Mistakes have a way of cropping up unexpectedly: a deep dish out of the two-point roll that had not been typical of a practice flight, for instance. An early kick of the rudder at the top of the hammerhead that resulted in an unwanted rolling motion thanks to torque. Did the judges watching below spot these? You bet.

Lentz-Gauthier was kind, calling 72 percent (the average of my two flights in the Green Mountain Aerobatic Contest this month) “very solid.”

“That's the level where you really have to start looking at things with a magnifying glass,” he added. “The Sportsman field in the [U.S.] is unbelievably competitive!”

Worth bearing in mind that we compete primarily against ourselves, and the tricks our minds play on us in the confines of the aerobatic box. 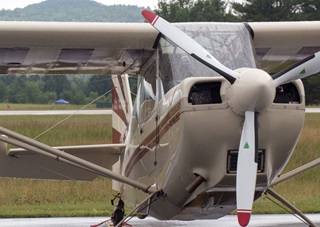 Being upside-down and forgetting the difference between right and left is not the first time I’ve been challenged to keep my brain on pace with an airplane. Training for aerobatic competition has reminded me at times of learning to fly all over again, feeling nearly overwhelmed by particular challenges (first landings in a stiff crosswind, or encountering mountain waves for the first time during a solo cross-country as a newly minted private pilot come to mind). I expect it will get easier, in time, to master the mental aspect of competition flying, just as the fine points of the techniques have gradually become more a matter of muscle memory than conscious thought. I’ll find out soon enough: The Kathy Jaffe Challenge is on for Aug. 7 through 9 at New Jersey's South Jersey Regional Airport, and I’ll be headed to the U.S. National Aerobatic Championships in Texas in September. You’ll have a chance to read all about those in the months to come; I’ll be covering the national contest for AOPA, and perhaps introducing you to aspects of the sport that might surprise and entertain. Pilots in the area might also be entertained by a particular Super Decathlon, climbing skyward on a vertical line, and (hopefully not) looking a little lost now and then.

Those of you with advice to offer on keeping the brain clouds at bay, I’m all ears.