Get the app Get the app
AOPA Members DO more LEARN more SAVE more - Get MORE out of being a pilot - CLICK HERE
News & Media Little airplane, big job

A group of pilots dedicated to honoring and keeping alive the memory of the L-birds and their pilots was formed in 1981. Calling themselves the Alamo Liaison Squadron, their purpose is to purchase, restore, fly, and maintain liaison airplanes. Their operations are based at Cannon Field, a 2,900-foot grass strip south of San Antonio, Texas. Membership is open to anyone interested in these airplanes. The squadron has conducted an L-bird fly-in—the Blue-Bonnet Picnic—at Cannon Field every year since 1983. Widespread thunderstorm activity in the area preceding the 2015 event prevented many L-birds from attending, although that didn’t dampen the enthusiasm of the group that was there.

The fly-in is open to the public, has a comfortable hometown feel, and is unabashedly patriotic. A modest airshow followed the pledge of allegiance and the singing of The Star Spangled Banner. A pair of bagpipers played Amazing Grace as a missing-man formation of L-birds putt-putted above the runway in remembrance of two recently passed squadron members.

A tall observation platform on the field that could be mistaken for some sort of control tower was built by a local Boy Scout to satisfy his Eagle Scout service-project requirement.

L-pilot Jesse Bonilla flew low over the grass strip in a Taylorcraft L–2 and dropped several small parachutes, each containing small packages of candy. After the all-clear signal was given, children that had been waiting impatiently near the runway’s edge were allowed to race out to retrieve the goodies. This event honored the original Berlin candy bomber, Col. Gail Halvorsen.

The squadron also participates in community events and other airshows. They make flybys over local parades and schools, and they frequently are called upon to fly missing-man formations to salute recently passed military veterans. The L-birds are low and slow, and lack flash, fire, and thunder, but these heroes of World War II are always appreciated.

Gene Jensen is a squadron leader, retired Air Force officer, and curator of the small L-bird museum at Cannon Field. He has lived in the only house on the airport for the past 15 years. Jensen estimates that only about 100 World War II liaison airplanes survive in airworthy condition. The squadron has a dozen of them and the rest are scattered about the country. The rarest L-bird is the Stinson L–1 Vigilant; only one remains. A liaison airplane is the most affordable way to own a warbird, and operating one is certainly economical. A Grasshopper typically sips only four gallons per hour in cruise flight. Some owners of small postwar taildraggers paint them to look like liaison airplanes, as an homage to the little airplanes that did a big job. —BS

A claim that small tube-and-fabric liaison airplanes were the most feared American aircraft of World War II seems incredulous, almost laughable. But those aware of the facts argue persuasively that the claim is true.

At a time when there were no satellites, helicopters, or drones, liaison airplanes—L-birds—would fly over the next hill, scout for the enemy, and assist in his destruction. They were the eyes of the artillery. The pilot of an L-bird would call for firepower to be directed at the appropriate grid position shown on his chart, and then observe the results. He would then call out successive aiming corrections on the radio to help the gunners zero in on the target. Soon, as many as 100 large-caliber guns would rain upon the enemy. These little airplanes and their pilots were responsible for an incredible number of battlefield victories, but went largely unnoticed by the public.

Although their low altitudes and airspeeds made L-birds easy prey for ground fire, the enemy often was unwilling to take a shot. He feared that the firing flash from his guns would expose his position and increase his vulnerability.

L-birds were the smallest and lightest airplanes of the war. In addition to being effective artillery spotters, they served in an almost limitless variety of other roles. These included intelligence gathering, supply delivery, courier service, transport and ferry service, casualty evacuation, photo recon, search and rescue, dropping surrender leaflets, and more. There wasn’t much that L-birds didn’t do, and they did it all while avoiding enemy aircraft. It is claimed that no American liaison airplane was ever shot down by a fighter.

The last recorded aerial battle in the European Theater of Operations, however, involved two liaison airplanes. In late April 1945, Lt. Duane Francis and his observer, Lt. Bill Martin, were flying a Piper L–4 Grasshopper named Miss Me over Germany. The pair spotted and opened fire on a Fieseler Storch—a German observation airplane—with their pistols, forcing the German crew to land and surrender. It’s alleged to be the only airplane shot down during World War II with handguns.

Six models were used as L-birds during the war. The Stinson L–1 Vigilant was a relatively large, capable, 295-horsepower airplane, but it was too complex and difficult to maintain easily in the field. It took several men just to push it around on the ground. Only 352 were built.

The tandem-seat Taylorcraft L–2 (1,500 built) was much lighter, simpler, and far more practical, but most of these were used stateside in the Civilian Pilot Training Program.

Approximately 3,000 similarly small Aeronca L–3 Defenders were built and used in the Pacific Theater and the Philippines. This was the forerunner of the postwar Aeronca 7AC Champion. It often was confused for the Piper J–3 Cub because, like the Cub, its engine cylinders were not cowled.

The Piper L–4 Cub was produced in the greatest numbers (5,424 built) and used in all theaters of the war, including North Africa. It was identical to the civilian J–3 Cub except that it had more windows for better visibility. The Taylorcraft, Aeronca, and Piper aircraft were powered by four-cylinder, 65-horsepower Continental engines and were known as Grasshoppers.

The rugged Stinson L–5 Sentinel (4,481 built) was commonly referred to as the “flying Jeep.” It was the most utilitarian of the L-birds and used mostly in the Pacific and Asia, as well as during the Korean War. It was roomier—it could carry a litter patient—and more powerful. High-ranking officers (including generals Bradley, Clark, Eisenhower, Patton, and Stillwell) used them for transportation. On D-Day plus one (June 7, 1944), an L–5 became the first Allied airplane to land in France (on Utah Beach).

When Hermann Göring, once the second most powerful man in Germany, surrendered to the Allies, he was removed in an L–5.

The last of the wartime L-birds was the Interstate L–6 Cadet, but only 350 were built. Altogether, more than 14,000 liaison airplanes contributed to the war effort.

In 1942 the Army was in dire need of gliders to train pilots to fly the Waco CG–4A assault glider. Grasshopper manufacturers simply removed the engines from their L-birds; added a third seat ahead of the other two tandem seats, to preserve the center of gravity; and steamlined the nose. The result was the Aeronca TG–5, Taylorcraft TG–6, and Piper TG–8 training gliders.

L-birds were delivered to war zones in crates and assembled in as few as three hours. Although they were considered disposable, their pilots didn’t quite feel that way. Many L-pilots, as they often were called, flew the same airplane in combat as the one in which they had learned to fly as civilians. They went aloft to seek the enemy armed with only a Colt .45 automatic pistol, and occasionally hand grenades or a pilfered carbine—and seldom received the credit they deserved. Unlike those who flew other warplanes (commissioned officers), most L-bird pilots were given the rank of staff sergeant upon completion of flight training and served out the war as enlisted men. They wore silver wings like those of other Army Air Forces pilots, but with the letter L superimposed on them.

L-bird pilots seldom had the luxury of using real airports. They frequently landed in jungle clearings; on trails or narrow, twisted roads; on the slopes of hills; and in parking lots. They landed in places where other airplanes and pilots feared to tread. Lacking a runway or something that could be used as one, pilots often opted for open fields, preferably those where animals were grazing, because these provided some assurance that the areas were clear of land mines.

According to L-bird authority and author Hardy Cannon, some L-birds even operated from wooden “runways” laid out on jungle treetops. Such facilities could accommodate only five Grasshoppers at a time. Fuel, oil, and supplies had to be hauled to the treetops in preparation for a mission. Takeoffs and landings were separated by at least 10 minutes to give the trees enough time to stop shaking.

Some LSTs (naval vessels used to directly land vehicles, troops, or cargo during amphibious operations) were modified with 16-foot-wide, 200-foot-long plywood runways laid out six feet above the ships’ main decks. These enabled L-pilots to take off at sea and fly over Pacific islands being invaded. But these improvised runways could not accommodate landings, so there was no returning. Pilots had to land wherever else possible, and sometimes it was not.

Necessity being the mother of invention, this problem led to an imaginative solution, the Brodie Landing System, developed by Army Air Forces Capt. James Brodie. The system featured a 500-foot-long cable suspended parallel to and off one side of a ship. The idea was for the pilot to use a tall hook mounted atop his airplane to snag a sling hanging at the beginning of the cable. The airplane then slid along the cable, which had a braking mechanism, and came to a stop while suspended above the ocean.

Takeoffs and landings usually were made with the ship operating full speed ahead and into the wind. But when the wind was calm, an LST could give a pilot only an eight-knot headwind advantage.

It can be difficult to envision this seemingly Rube Goldberg apparatus, but you can best understand and appreciate its ingenuity by watching it in action. Go online (www.YouTube.com) and type “Brodie Landing System” in the YouTube search window.

Brodie’s system also was installed on land, where terrain was too rugged to accommodate normal takeoffs and landings. It allowed the pilot of an L-bird to take off and land without its wheels ever touching the ground.

WWII-era L-birds and their civilian equivalents 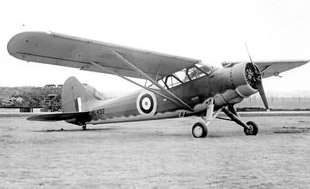 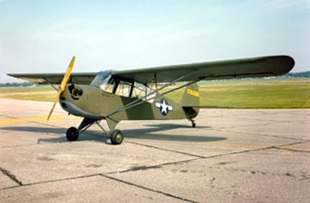 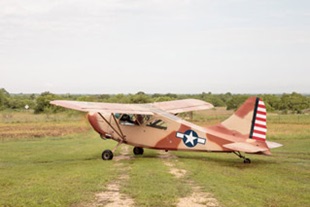 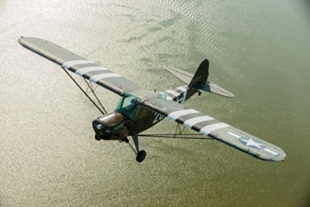 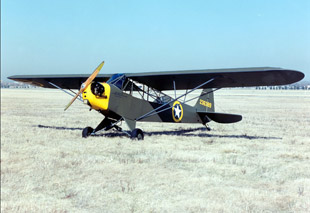 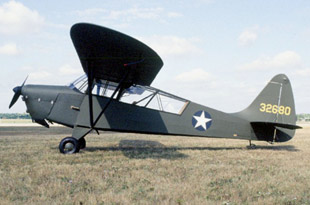