Editor's note: This article has been updated to include the identity of the second person killed in the accident, which Sonex confirmed June 3. 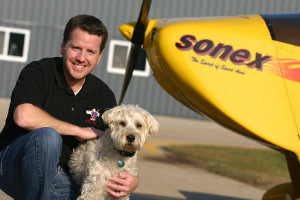 Monnett, son of Sonex Aircraft LLC Founder and President John Monnett Jr., was known as a friendly, energetic leader, who focused on creating innovative, affordable sport aircraft. Tributes began to pour in through social media in the hours after the accident.

“A great dad, engineer, community leader, and friend,” EAA President Jack Pelton wrote. “Words cannot express how heartbreaking this is for me.”

John is a prolific designer whose creations include pylon racers, motor gliders, and most recently the JSX-2 “SubSonex” single-seat sport jet. He told staff June 3 that the company will continue to operate despite the loss of Jeremy and Clark, according to a company statement that identified Clark as the second fatality.

Jeremy earned a bachelor’s degree in mechanical engineering from the University of Wisconsin in 1996 and worked at Boeing before joining Sonex in 1998. He worked side-by-side with his father on many aircraft projects, and the first design of his own was the single-seat, folding-wing “Onex,” which was introduced in 2011.

More than 500 customer-built Sonex kit aircraft have been built and flown.

Jeremy was a private pilot with glider and floatplane ratings. He is survived by wife Kate Cotter Monnett and two sons.

His father posted a short note on Jeremy’s Facebook page: “On your eternal flight, take the passengers of love for family, compassion for community, and a passion for aviation. I will follow your course guided by the bright light you leave behind.”