Get the app Get the app
Get the latest news on coronavirus impacts on general aviation, including what AOPA is doing to protect GA, event cancellations, advice for pilots to protect themselves, and more. Read More
Already a member? Please login below for an enhanced experience. Not a member? Join today
News & Media Baker joins seaplane association’s board 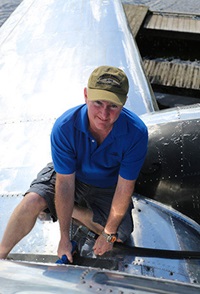 AOPA President Mark Baker, a longtime land and sea pilot, recently joined the Seaplane Pilots Association’s Board of Directors where he will “provide his informed perspective as head of the world’s largest civilian aviation organization, and as an experienced and enthusiastic seaplane pilot and owner” to help the organization grow, said Steve McCaughey, the association’s executive director.

Baker, who earned his pilot certificate in his twenties, has spent many weekends through the years flying and hanging out at seaplane bases. Although Baker flies turbine airplanes and helicopters, his favorite aircraft is a Piper J-3 Cub that is currently fitted with amphibious floats.

“I’m excited to have the opportunity to support the water flying community as a member of the SPA Board,” Baker said. “Some of my very favorite flying experiences have taken place on floats, and I want others to have the same opportunity to enjoy access to both our public waterways and our skies.”

AOPA Editor in Chief Tom Haines tagged along on one of Baker’s seaplane adventures, ferrying a Beech 18 on straight floats from Minnesota to Florida in 2014. Read about the adventure and watch a video from the AOPA Pilot feature.

The Seaplane Pilots Association's mission is to “represent the interests of seaplane pilots and owners, advocate for open access for seaplanes to public navigable waters, and promote seaplane flying to the general aviation pilot community and the public at large.”

AOPA ePublishing Staff editors are experienced pilots, flight instructors, and aircraft owners who have a passion for bringing you the latest news and AOPA announcements.
Go to AOPA ePublishing staff's Profile
Topics: Seaplane