Get the app Get the app
Already a member? Please login below for an enhanced experience. Not a member? Join today
We will be performing maintenance on our systems Sunday, 5/22/2021, beginning at 12:00 A.M. ET and ending at 6:00 A.M. ET. During this time, you may experience intermittent service outages. We appreciate your patience.
News & Media Best in class

Piper makes the grade with its new M series

It’s almost as if Piper created the new M600 single-engine turboprop just for James (Scott) Middleton. A frequent trip for the entrepreneur was from his medical supply company’s headquarters in North Florida to Denver, where he owns a respiratory equipment company. Distance: Just shy of 1,300 nautical miles. IFR range with reserves on the new M600: 1,300 nm.

“When they told me about the extra 90 gallons, they had me,” said Middleton, who is the first customer for the new model and expects to take delivery this fall. Middleton knew what he was getting into; he already owns a 2014 Piper Meridian and loves the airplane. “My first 15 months were the perfect ownership experience,” he said. “I had zero squawks in the first year of ownership. I’ve never had that in 30 years of owning airplanes.”

Middleton learned to fly in 1986 after a friend took him for a flight in a Citabria, lifting off from the grass at a family picnic. “That was on a Saturday. I was at the airport for my first lesson on Monday.”

He soloed in about eight hours and immediately bought a Piper Seneca II. You know a student is all in when he buys a twin right after solo. Middleton owned the Seneca for 16 years, but with a growing family he moved up to a Cessna 414. When the aging Cessna started becoming a maintenance burden, his wife, Patty—a frequent passenger—said, “You should buy a new one.”

Understanding that permission is good, he purchased the new 2014 Meridian—or, as Piper CEO Simon Caldecott likes to put it, Middleton “saw the light and came home.”

However, even with the new Piper, he longed for more range to simplify that trip to Denver. His Piper dealer encouraged him to visit the Piper factory to see what they were working on. On a trip there in a 2015 M500 turboprop—an upgraded Meridian—he experienced some of the new autopilot features and saw what the engineers were doing with the all-new wing, which can carry an extra 90 gallons of fuel. “I always thought with an extra 75 to 100 gallons, it would be the perfect airplane.”

That clean new wing, fat with extra fuel and the structure to allow for a maximum takeoff weight of 6,000 pounds, boosts the Piper Meridian from a personal airplane to a serious business-aircraft contender. The smooth new wing includes no aerodynamic devices, short of stall strips. Gone is the wing root glove found on the Meridian, added to house jet fuel as the PA–46 transitioned from the piston-powered Mirage to a single-engine turboprop in 1999. Instead, the new M600 wing is straight, with a much wider chord.

More important, though, the higher weight—along with the extra fuel—give M600 owners a great deal more flexibility in trading fuel/range for passengers. In fact, with a standard useful load of 2,400 pounds, the M600 can carry 700 pounds more than the standard M500. A fully fueled M600 with 260 gallons can carry only about 107 pounds more than an M500 with full tanks (170 gallons), but the 53-percent increase in fuel capacity provides a range of payload options not available to the M500 owner.

Piper’s Caldecott believes that flexibility opens a new market for the M600—that of a true business-class airplane, because it has the capacity to carry a professional pilot as well as reasonable payload for passengers and bags. Prior to the upgrade, most Meridians were flown by owners on personal missions, at least in part because of the payload limitations.

Although the M600 weighs considerably more, it gives up no cruise speed to its lighter cousin. When it is certified this fall, the M600 is expected to have a maximum cruise speed of 260 knots true airspeed, on par with the M500. The speed comes in part from a 100-shaft-horsepower boost, to 600, for the Pratt & Whitney PT6A-42A. Also contributing are that clean wing, and moving the radar antenna from an under-wing pod to a pod embedded in the leading edge—worth about 3 knots, according to the Piper test pilots.

Besides the wing and slightly wider gear track, the M600 sets itself apart—and earns the $600,000 cost difference, compared to an M500—through the use of the latest in cockpit technology. The M600 is the first single-engine turboprop to use the Garmin G3000 cockpit, which includes a pair of touch-screen controls to manage the PFDs and MFD. The three 12-inch screens create an all-new, clean panel with a minimalist feel, even though its capabilities are tremendous. To the left of the pilot’s PFD, an Aspen EFD1000 with an internal battery serves as emergency backup, eliminating the need for any mechanical instruments. In addition, all of the placards are now backlit, improving night operations.

The G3000 incorporates an automatic digital pressurization controller, meaning the pilot need only set the destination’s field elevation; the system does the rest. Taking note of the recent spate of accidents seemingly related to pressurization and hypoxia problems, the G3000 includes a hypoxia recognition system. If the pilot hasn’t interacted with the avionics in some way for a period of time, or if the cabin has climbed to an unsafe altitude, the GFC700 flight control system will descend the airplane to a safe, breathable altitude.

In a further attempt to improve safety, Piper and Garmin worked together to leverage other capabilities of the GFC700, including ESP—Electronic Stability and Protection; USP—Underspeed Protection; LVL—Level Mode; and GA—Go Around. ESP automatically nudges the airplane back closer to the center of the flight envelope when it strays with the autopilot off—the pilot feels higher resistance as the airplane gets closer to departing controlled flight. USP causes the nose to pitch down, preventing a stall. LVL allows the pilot to return the airplane to straight-and-level flight with the touch of a button.

GA permits a pilot to fly a coupled missed approach, especially critical during a low approach when the pilot decides to go around. Too frequently, pilots lose control when forced to hand-fly a missed approach as they reenter instrument conditions while transitioning from a nose-low, low-power situation to a nose-high, high-power climb. Allowing the autopilot to fly the procedure can improve safety. The pilot must then manage only power.

“The ESP and underspeed protection, it really works,” said Middleton, who experienced it in the M500, which began deliveries earlier this year. “We all think we’re great pilots, but not everybody is completely on your best game every day. If you lose attention for a moment, this can save you. It was amazing.”

The cockpit changes represent a significant advancement in safety—so important that Piper decided to infuse them into all of the M Class airplanes. The M Class includes the M600, the M500—the Meridian still with a Garmin G1000 panel, but with the flight control upgrades and interior refinements—and the M350, the rebranded piston-powered Mirage that also includes the flight control upgrades and interior changes. In fact, the M350 also includes a panel-mounted pulse oximeter that allows the pilot to keep track of his blood oxygen saturation level and pulse rate. In addition, the device warns if carbon monoxide levels become dangerous.

The M500 does not yet include the emergency descent mode, but Piper officials say that is in development.

The new family of airplanes gives Piper customers a clear path to more performance and capabilities. The 350-horsepower, 213-knot M350 is the only pressurized six-place, cabin-class single in production. Standard equipped price is $1.16 million. The 500-shaft-horsepower M500, at $2.26 million, brings turboprop speeds of 260 KTAS and turbine reliability, but at less range and more fuel burn. The M600, at $2.82 million, keeps the speed and adds the more sophisticated cockpit, but nudges the range out to 1,300 nm—close to the M350’s 1,340-nm range. It’s interesting that the slowest model with the least amount of fuel (120 gallons) has the greatest range—that says something about the efficiency of piston engines.

Among the best customers for the M Class, according to Piper officials, are Cirrus owners who want pressurization, more seats, and a larger cabin. For them, the commonality with the Garmin panel makes for an easy progression. Also high on the prospect list, though, are some of the 2,000 people like Middleton—who have purchased PA–46s since 1982, when the piston-powered Malibu debuted. As Caldecott says, “We welcome them back into the family.” 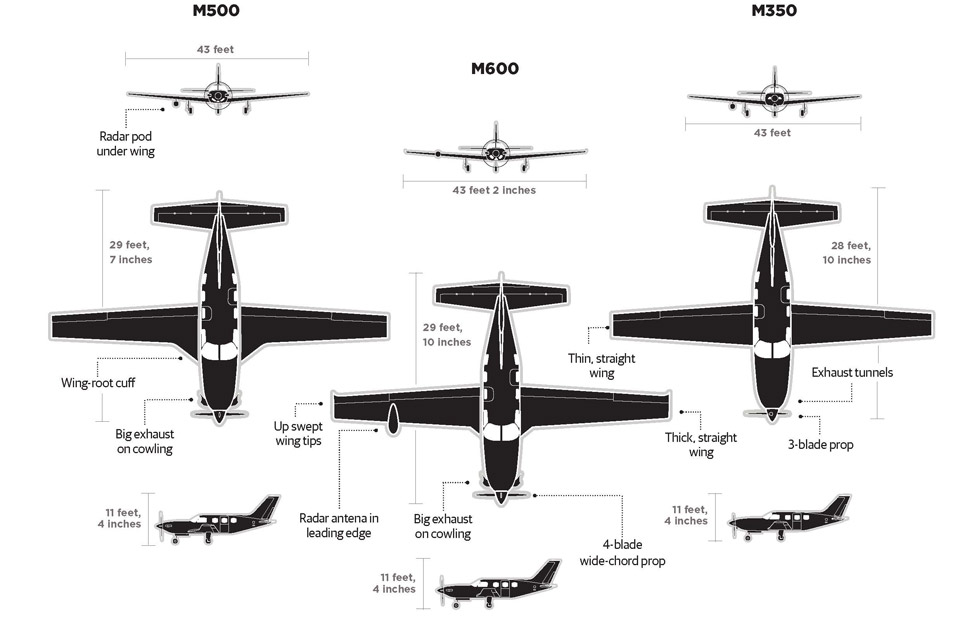