Get the app Get the app
AOPA Members DO more LEARN more SAVE more - Get MORE out of being a pilot - CLICK HERE
News & Media Homecoming Fly-In, Frederick, Maryland 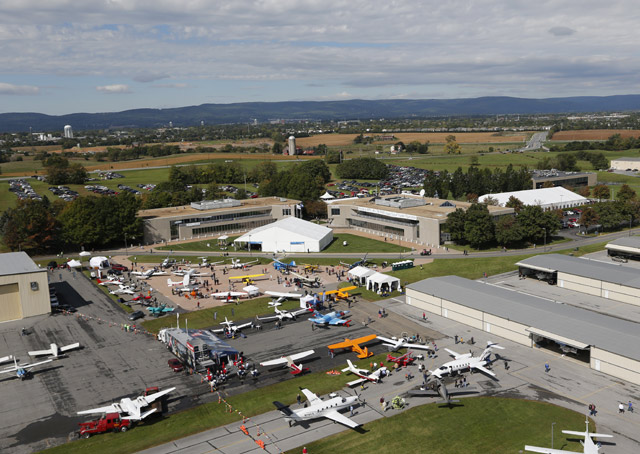 The Aircraft Owners and Pilots Association established its headquarters on the Frederick, Maryland, airport in 1983.

Come to your airport—the national headquarters of the Aircraft Owners and Pilots Association—for the association’s annual Homecoming Fly-In June 6. Open for tours, the main building houses the offices of the president, the Air Safety Institute, the media department, and both the pilot information center and member services call center.

A variety of events and activities will be available for AOPA members, pilots, and aviation enthusiasts. Download the event schedule.

Friday
6:30 to 9:30 p.m.­—Barnstormers Party and screening of Living in the Age of Airplanes 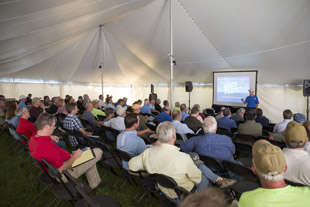 Are you a pilot thinking of getting back into flying after an absence? If so, AOPA is offering a Rusty Pilots Breakfast Seminar from 7:30 a.m. to 10 a.m. on Saturday at the You Can Fly Pavilion. Brush up on your aviation knowledge and explore what’s changed since you last took the controls. You’ll even receive a logbook endorsement for the ground portion of your flight review.

Separate reservations are required for the Rusty Pilots Seminar (www.RustyPilots.org). And, don’t forget to RSVP for the pancake breakfast and AOPA Fly-In.

TOP 10 REASONS TO COME TO FREDERICK

3. We’ve got a tower. Great controllers who are friendly and helpful.

5. Green-walled by the hills of Maryland. John Greenleaf Whittier’s poem, Barbara Fritchie, about the Union march through Frederick during the Civil War, accurately describes this bucolic rural airport’s surroundings.

7. Barnstormers Party. Join us Friday night for food and fellowship.

9. 12 Food Trucks. From all over the Washington, D.C., and Frederick area, driving in especially to feed you.

10. Michael Goulian. He’s back! Michael flies an all-new aerobatic performance. The Breitling Jet Team will also perform a fly-over. It is the first year the jet team has appeared in the United States. 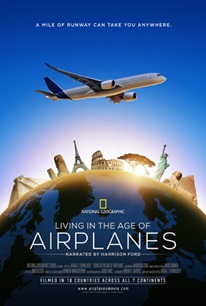 Join us for a screening

The Friday night Barnstormers Party on June 5 will feature a special screening of the new film Living in the Age of Airplanes. Living in the Age of Airplanes weaves together the profound ways in which aviation has transformed our lives and takes audiences on an epic journey through 18 countries and across seven continents as it presents a unique perspective on how the airplane has changed our world. It is narrated by actor and pilot Harrison Ford and features an original score by Academy Award-winning composer and pilot James Horner (Avatar, Titanic). Living in the Age of Airplanes is now playing in select theaters nationwide and at the National Air and Space Museum in Washington, D.C., and the Udvar-Hazy Center on the Imax screen. Filmmaker Brian J. Terwilliger (creator of the aviation classic One Six Right) will be on hand to introduce the film and engage fly-in attendees in discussion. The Barnstormers Party also includes a catered barbeque dinner at 6:30 p.m.. 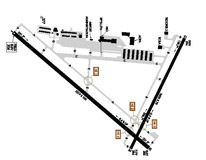 • Check notams and read the AOPA flight procedures available online (www.aopa.org/fly-ins) on the Frederick page. When the president is at Camp David, P-40 is expanded with a 10-nautical-mile TFR. Airspace restrictions can change on short notice, so don’t let careless flight planning spoil a fun day at the airport.

• Submit fuel requests early. Marshalers will direct you to parking. If you need fuel, submit your requests once you’ve parked to give Landmark Aviation staff plenty of time to fuel your aircraft before you depart.

• Taxi with care. Taxiways have been renamed since the tower opened in 2012, so stay alert and pay close attention to new signage. Download a current airport diagram from AOPA Airports online.

There’s so much more than this—on Friday night there’s a screening of the film Living in the Age of Airplanes and a Barnstormers Party. Make it a weekend and enjoy Frederick’s small-town charm—its great restaurants (including Top Chef winner Brian Voltagio’s VOLT) and the city’s annual Festival of the Arts, a juried show that takes place on the town creek, an area modeled after the San Antonio, Texas, River Walk. 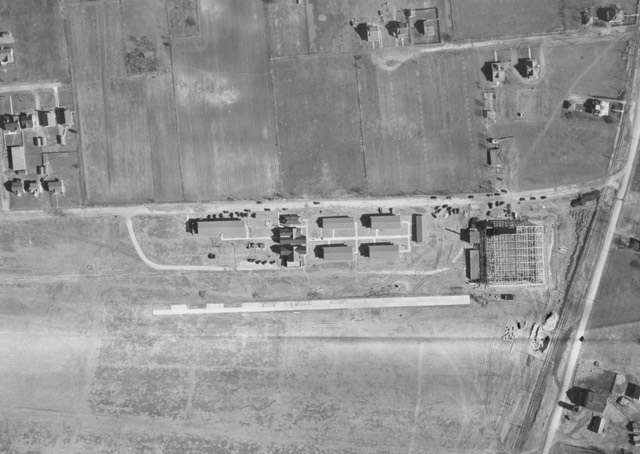 Aviation has been a part of Frederick’s history since 1911, when a cross-country flight in a Wright B flier co-piloted by Lt. Henry “Hap” Arnold (later the commanding general of all Army Air Forces in World War II) landed at Camp Ordway—which became Detrick Field—after taking off from the Wright Army flying school at College Park Airport. In 1912 the first airplane exhibition took place at the Frederick Fairgrounds May 7 and 8. Charles F. Walsh—known as the “Birdman”—was scheduled to perform in a Curtiss biplane. He was delayed, so aerobatic pilot Lincoln Beachey was the performer.

The first airport was located northwest of the city at Detrick Field; the army installation became Fort Detrick, home to chemical testing facilities. It operated as an airport from 1929 until 1944. Stevens Airport was Frederick’s second airport, located off Route 15 north of the city. The Airport Inn is the only reminder of that field, which operated from 1942 until 1960. Frederick received federal and state funds in 1944 to buy land north of East Patrick Street for a municipal airport. Construction began March 26, 1946, under the administration of Mayor Lloyd C. Culler. The first airplane—a Stinson, piloted by A.B. Sutherland—landed at the airport on April 17, 1946, while the facility was still under construction. The airport was completed three years later and dedicated May 1, 1949. The terminal building is named for William Theodore Delaplaine III, the first Frederick pilot to die in World War II. 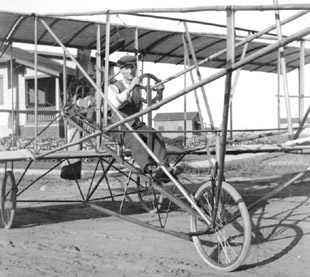 The terminal building served as a weather observation office in the 1950s. Frederick was a flight test turnpoint for aircraft from the Fairchild plant at Hagerstown, and certification flights took place between the two airports. “That’s why the terminal building looks like a tower,” says Rodney Martz, AOPA senior aviation technical specialist and the association’s unofficial historian.

• Maryland State Police’s statewide medevac system was the first of its kind in the country.
• The National Air Races were held in Frederick in the 1960s.
• Detrick Field was named for the Maryland National Guard’s 104th Observation Squadron’s flight surgeon, Dr. Fredrick L. Detrick.
• In the movie Executive Decision (1996), actor and pilot Kurt Russell (an AOPA member), named the airport where he lands outside Washington, D.C., Frederick Field in honor of AOPA’s national headquarters.

Look! Up in the air! 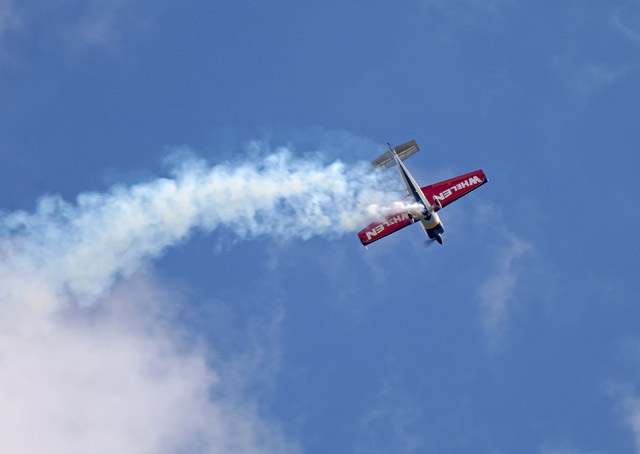 Michael Goulian doesn’t just fly an airshow, he attacks it. An aerobatic pilot and Red Bull Air Race competitor, Goulian will be the headliner for Frederick’s show in the sky at the fly-in on June 6. He won the United States Unlimited Aerobatic Championship at age 27, has represented the United States at the World Aerobatic Championship three times, and won first place in the Red Bull Air Race Championship in 2009. Millions of airshow spectators have witnessed the ferocity of his performance—every roll, pull, and tumble of his flight is a deliberate execution of precision. Each winter, he modifies his performance and practices in Florida. At Frederick, his 12-minute aerobatic performance in his Extra 330SC will feature new choreography in both music and narration. 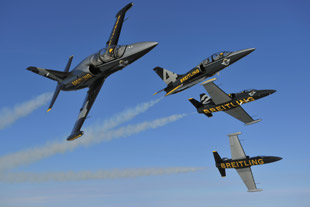 “I’m excited to once again be flying at the home of AOPA,” Goulian says. “AOPA is a powerful voice in advocating for general aviation. I’m a proud lifetime member so, in a small way, I can help support its efforts at this event.”

Also scheduled to appear at Frederick is the Breitling Jet Team, as part of its first U.S. performance schedule. The seven-jet team will perform a flyover in their L-39C Albatrosses, which were shipped from Switzerland to the United States and reassembled in Florida prior to their first performance at Sun ’n Fun in Lakeland in late April. Members of the team will also be available for autographs, and will welcome questions from the crowd after they land.

AOPA moved its national headquarters here in 1983, choosing the airport for its proximity to Capitol Hill and its GA ambiance. Here you’ll find GA and corporate aircraft, helicopter and fixed-wing training, a based Maryland State Police helicopter unit, and a new tower.

Over the years, AOPA has hosted many fly-ins welcoming its members to visit, celebrate GA, and tour their “home”—the 55,000-square-foot headquarters building. During fly-in, take tours with our knowledgeable staffers and see where the work is done to protect your freedom to fly.

Start your day with a cup of coffee from Flying High Coffee, a Vermont L3C company that benefits aviation outreach and educational programs. Join us for a pancake breakfast; let your association staffers serve you breakfast! Or if you’re a Rusty Pilot, join a breakfast and seminar designed to help you shake off the rust and get back into flying. Seminars presented by aviation luminaries will take place throughout the day (see the schedule on page R–4 for more details). Beginning at 11 a.m., 12 different food trucks will begin arriving, parking conveniently in the AOPA parking lot ready to serve you lunch (reserve your discounted tickets online). From barbeque to vegetarian, there’s a great meal for everyone.

While you are lunching, look to the skies for a formation flyover by the seven L-39C Albatrosses of the Breitling Jet Team; the team will take questions and give autographs when they taxi onto the AOPA ramp. Then get ready for superstar aerobatic performer Michael Goulian as he twists, turns, and tumbles his Extra 330 through the Frederick skies. Goulian also will sign autographs when he lands.

The day concludes with a Pilot Town Hall. AOPA President Mark Baker will update you on the activities of your association—third class medical reform (sign the petition on site!); flying club initiatives; and more. Baker will happily take your questions until the fly-in concludes at 4 p.m. 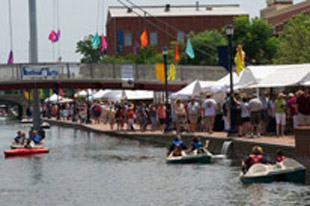 Frederick Festival of the Arts: The twenty-second annual Frederick Festival of the Arts is a juried, three-day fine arts festival held the first weekend of June along Carroll Creek Linear Park in downtown Frederick. The event features artists from across the country, live entertainment, artist demonstrations, children’s activities, food, and much more. 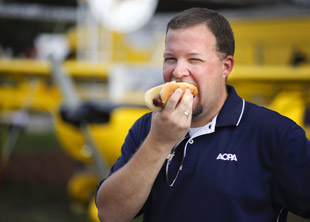 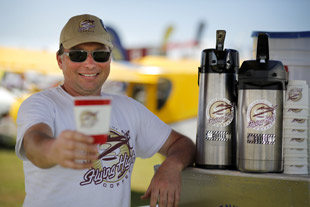 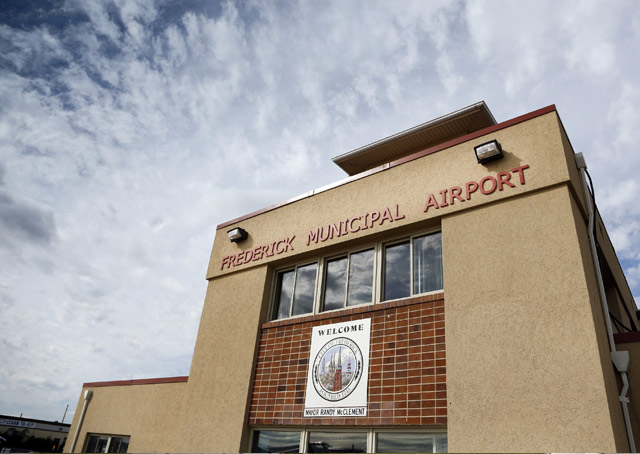 Frederick Municipal Airport (FDK) has small-town charm with big-city operations. It’s a city of 67,000 people, served by an airport with more than 130,000 operations per year. Historically known for its role in the Civil War, Frederick was immortalized in John Greenleaf Whittier’s poem Barbara Frietchie, which told of Stonewall Jackson’s march through town. Whittier described the city: “The clustered spires of Frederick stand, green-walled by the hills of Maryland.” Those churches still define the cityscape and the green hills surround the airport, a general aviation hub that also serves as a reliever for the metropolitan areas of Washington, D.C., and Baltimore, Maryland.

From paninis to hot dogs, Cubanos to tacos, and pizza to falafel, the 12 food trucks specially selected to serve you lunch on June 6 will please every palate. Brought to AOPA by Fulfilling U.S., the company assures that for every meal purchased, one will be donated to someone in need.

Check out this list of the 12 food trucks scheduled to arrive at 11 a.m. in the AOPA parking lot. Remember to reserve your lunch tickets for great discounts (www.aopa.org/fly-ins).

1. Amorini Panini—“We are the panini—done right” is the slogan of this food truck, which offers meats and cheeses on handmade artisan bread, grilled to perfection.

6. Greatest American Hot Dogs—Gourmet hot dogs from around the country.

10. Linda’s Luncheonette—Homestyle sandwiches made to order.

12. Slainte On Wheels—Traditional Irish favorites along with eclectic gourmet creations. 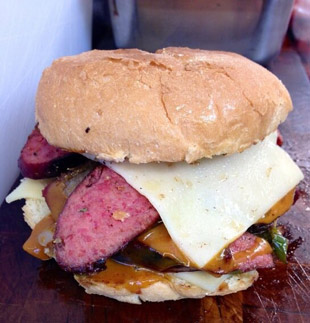 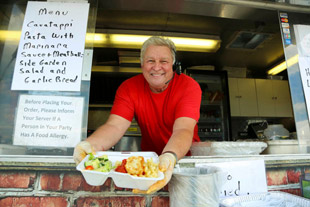 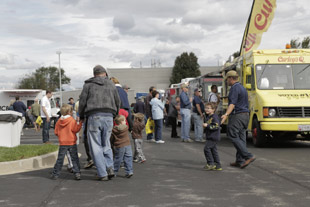