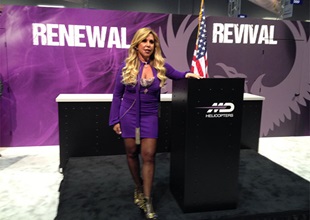 Declaring this “a time for disruptors,” flamboyant MD Helicopters owner Lynn Tilton vowed to keep her storied company moving forward into her second decade of ownership.

Tilton owns Patriarch Partners, a holding company that owns more than 70 firms worth some $8 billion and with 120,000 employees, which she claims makes her company the largest woman-owned business in the United States. Patriarch owns such companies as firefighting equipment manufacturer American LaFrance, Spiegel Catalogs, Rand McNally, and Stila Cosmetics. “We buy companies left for dead,” she said at Heli-Expo in Orlando this week. While management teams run most of her companies, she is personally involved in MD Helicopters. “MD Helicopters is closest to my heart,” she said.

During a press conference, the controversial investor looked back on her decade at the helm of the MDH, talking for some 40 minutes without notes about how the shuttered manufacturer had 360 customer aircraft grounded because of the lack of spare parts when she bought it. During the decade she has focused on vertically integrating the manufacturing process for the single-engine line of helicopters, which feature Notar no tail rotor anti-torque systems for directional control. As a result, the company now produces nearly all of the components itself, dramatically reducing parts inventory problems and better serving customers.

Dressed in all purple in a purple camouflage-themed booth (“because I am a girl and proud of it”), the executive said her decision to take the company vertical when others in aviation were focused on outsourcing caused her to be ridiculed, but it solved problems for MDH. Today the company makes a full line of single- and twin-engine helicopters, with many of them used in military and paramilitary roles around the globe. The singles are frequently equipped with guns and missile systems as well as special mission observation packages.

The twin-engine helicopters are not yet vertically integrated, but Tilton said she is beginning a process to redesign the 902 twin so that more of the parts can be manufactured by MDH, a process that will take at least three years and will give the company better supply chain management.

Proficiency: More than a bumpy ride