Get the app Get the app
Get the latest news on coronavirus impacts on general aviation, including what AOPA is doing to protect GA, event cancellations, advice for pilots to protect themselves, and more. Read More
Already a member? Please login below for an enhanced experience. Not a member? Join today
News & Media Pilots prep historic DC overflight

Editor's note: View a slideshow of the May 8 overflight and read about the ceremony commemorating the seventieth anniversary of the end of World War II.

Fifty-two vintage World War II military aircraft took off from Culpeper Regional Airport in Northern Virginia, joining up with four others from nearby Manassas Regional Airport/Harry P. Davis Field early May 7 in a partial practice of what’s likely to be a once-in-a-lifetime mission on Friday.

On May 8, the 56 warbirds will cross the skies of the nation’s capital in the Arsenal of Democracy: World War II Victory Capitol Flyover, which commemorates the seventieth anniversary of Victory in Europe Day. The aircraft will be organized in 15 historically sequenced formations representing the war’s major battles, ending with a missing man formation. The event honors those who fought in the war, as well as those on the home front who produced the tanks, ships, and aircraft that enabled the United States and its allies to achieve victory. 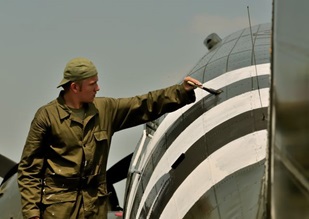 Among the airplanes participating in the flyover are the P-38 Lightning; the FG-1D Corsair; the P-51 Mustang; the B-25 Mitchell; and Fifi, the only flying B-29 Superfortress.

Pilot Bob Hill of Nashville, Tennessee, and co-pilot Robert Cope—also of Nashville—preflighted a Catalina PBY owned by Jerry Yagen and based at his Military Aviation Museum in Virginia Beach, Virginia. Hill has been flying that Catalina for 13 seasons, and Cope for nearly as long.

For the practice flight, they were assigned to depart Culpeper, hold at 4,500 feet over the nearby Warrenton-Fauquier Airport, and then—at a designated time—descend to and overfly the Culpeper airport before entering the pattern to land. “This was a made-up hold point for today,” Hill explained. “Tomorrow there will be four holds.” Aircraft will be stacked at different altitudes. The Catalina’s highest assigned hold on Friday is 2,500 feet, which will not be as comfortable as the cool 4,500-foot air temperature during Thursday’s practice—of course, the crew won’t have to descend as aggressively to make their time over the National Mall. To descend more quickly on the practice flight, they lowered their landing gear to increase drag.

“I feel like we represent every PBY crew during World War II,” Cope said of his role in the event. “And what an honor to have the call sign we’ve got: Strawberry 5. That was the call sign of the PBY that spotted the Japanese fleet, which started the Battle of Midway.”

That history’s certainly appropriate; the Catalina that Cope and Hill are piloting is the only PBY flying with known combat history. While the model is best known for its service in the Pacific Theater during World War II, however, their airframe served in the Mediterranean. “We have all the original logbooks to this airplane, which is kind of unique,” noted Hill—who’s actually type rated in five amphibious aircraft. In addition to the Consolidated PBY he is qualified in the Grumman Mallard, Grumman Albatross, and the Canadair CL-215 and CL-415 firefighting aircraft. “I spend most of my time, warbird-wise, in the B-17,” he said.

The Arsenal of Democracy flyover is historic, Hill said. “Obviously it’s a huge responsibility. We’re very focused. You don’t want to be the person who has an issue out there,” he explained. And the attention to detail that he and Cope have invested in the mission was evident during Thursday’s practice flight.

Above all, however, Hill’s hope is to inspire Friday’s audience. “If we can inspire young people to do something, it will be worthwhile”—whether it’s to consider an aviation career, the military, or learning to fly.

Planning for the flyover has been going on for months, and event organizers have worked closely with the FAA, the Transportation Security Administration, the National Park Service, the U.S. Capitol Police, and the U.S. Secret Service. The FAA granted the necessary approvals for the flyover in March, noting “the educational and historic value of this single signature event in commemorating this significant milestone in history.” Because of the flyover, Ronald Reagan Washington National Airport will be closed to commercial traffic from noon to 1 p.m. A rain date of Saturday, May 9, has been set for the flyover. 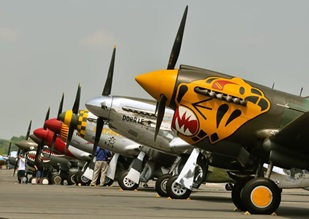 Among the people who will be watching the aircraft overfly the National Mall are Mark and Judy McEuen of San Jose, California. They were planning a two-week trip to Spain when they learned about the event. “When I found out about this, we arranged to do the trip a week early,” Mark explained. They flew from Madrid to Philadelphia on Wednesday, rented a car, and drove to see the aircraft at Manassas and Culpeper.

On Saturday, May 9, many of the airplanes featured in the flyover will be on display at the National Air and Space Museum’s Steven F. Udvar-Hazy facility in Chantilly, Virginia. During a Fly-In to Victory Family Day, from 10 a.m. to 3 p.m., visitors can talk with the pilots and enjoy educational and World War II-era activities that include hearing a performance by the U.S. Air Force Band Airmen of Note, planting a Victory Garden, and learning to swing dance.