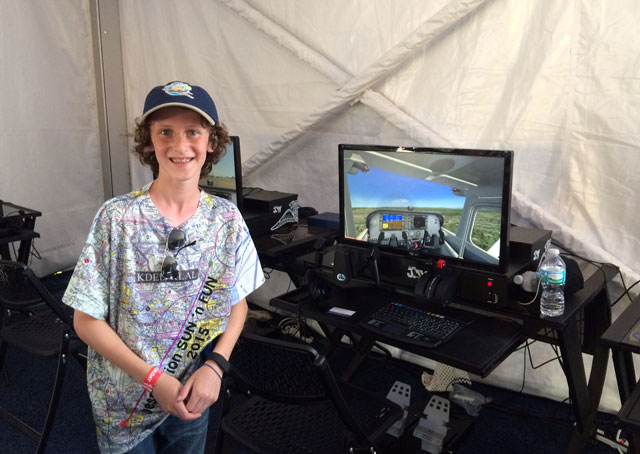 Trevor Simoneau is a kid with a plan.

The 11-year-old aspiring pilot wants to attend Embry-Riddle Aeronautical University. He hopes to earn a scholarship for tuition, but that won’t cover the costs of fuel for flight training, he said—so he and his mother sat down and hatched a plan to earn the money. Trevor’s three-week-old business, Chart it All, made its public debut at Sun 'n Fun in April with a booth at the Renegade Light Sport Aircraft exhibit.

Trevor stopped by the AOPA Campus at the fly-in wearing one of his products—a T-shirt custom printed with aeronautical charts. His shirt had a flight plan from DeLand Municipal Airport to Lakeland Linder Regional Airport and the words “Destination Sun ‘n Fun 2015” overlaying a chart of Florida. Chart it All also sells other product such as golf towels and aprons printed with U.S. charts, he said, and he had already sold some shirts at the show.

The Florida resident isn’t just preparing for Embry-Riddle financially, however: He’s in Aviation Explorers, takes AOPA’s educational online quizzes and courses, is active on the Share Aviation social network, has logged about eight hours in airplanes, and has racked up hundreds of hours on Microsoft Flight Simulator, he said. Every Christmas and birthday, he adds to his home simulator setup, he added.

The work must be paying off: At the Redbird Jays set up at the AOPA tent, Trevor’s communications with virtual air traffic control through a Mindstar Aviation network gave adult, certificated pilots a run for their money. While he took time off manning the Chart it All booth to enjoy the desktop simulators, he wasn’t completely off the job; Trevor handed out business cards advertising his new business.

“Hopefully this will get me to Embry-Riddle,” he said.