Get the app Get the app
AOPA Members DO more LEARN more SAVE more - Get MORE out of being a pilot - CLICK HERE
News & Media Mini Oshkosh: Full-scale fun for RC pilots

The tower is closed, and yellow Xs mark the ends of Runway 3/21, but the 7,000-foot grass strip and lake at Triple Tree Aerodrome is abuzz with helicopters, jets, aerobatic aircraft, warbirds, and floatplanes. Joe Nall Week at the aerodrome in Woodruff, South Carolina, is the largest remote control fly-in in the world, typically attracting RC pilots from all 50 states and 11 countries. Triple Tree anticipates about 1,700 pilots throughout the week ending May 16 and more than 10,000 spectators.

Just like at Sun ‘n Fun or EAA AirVenture, spectators crane their necks skyward to watch aircraft dance through the air, whistle and applaud performances, and judge landings. The similarities between large RC aircraft and the airplanes from which they are scaled are striking. RC pilots preflight their control surfaces and hand prop their gas-engine airplanes (during hand propping, another RC pilot or crew member straddles the aircraft, his or her legs against the leading edge of the horizontal stabilizer). Landings are similar too—some come in too fast and balloon, some skip across the water, while others grease their touchdowns. Pilots of RC taildraggers also have preferences for three-point or wheel landings, but they all practice good technique and taxi with their elevators in the up position. 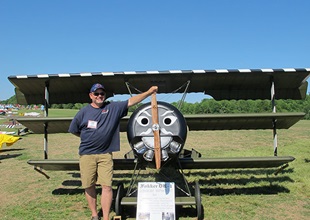 “This is just the ultimate paradise for RC pilots,” said Larry Hultman, a self-proclaimed “diehard radio control guy.” “They don’t make anything better than this. … It’s a place to start the year off every time.” Hultman, of Livingston, Texas, owns 18 RC aircraft ranging from a $400 trainer to his pride and joy, an $11,500 65-percent scale RC Fokker DR-1 triplane with a 16-foot wingspan he claims is the largest DR-1 flying in the world. He travels to 12 RC events a year and has added Triple Tree as a must. “Once I came last year, I see why everybody comes every year.”

The annual event started in 1983 and was renamed Joe Nall week in 1990 after Nall, an NTSB board member and personal friend of Triple Tree owner Pat Hartness, was killed in an aircraft accident in Venezuela in 1989. “During the years from 1982 until his death in 1989, Joe served as Master of Ceremonies of the Giant Scale Fly In held at Hartness Field—always using his aviation and modeling experience as well as his sense of humor to entertain the audience,” according to the event website. 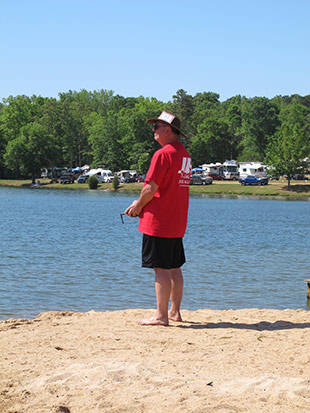 Aaron Griffin and his father Erik have driven from Baltimore to Woodruff for the past four years to bond during a father-son week of flying RC aircraft. Aaron, a seventh grader, flies a 33.5-percent scale Extra 300 with a 104-inch wingspan. The Extreme Flight RC Extra 300 model can fly more than 110 mph on a 120-cubic-centimeter engine, and that’s just fine for Aaron, who said he likes high-speed, high-energy flying.

Aaron and three other boys performed an impromptu aerobatic demonstration for spectators May 13. “Once they set the standards, we’re going to have our older guys try to match it,” the announcer said. “I think they’ll have their hands full.”

The youth made their aircraft whiz by inverted, upright, and sideways; they looped and rolled and strutted abilities only scale airplanes can do—like hovering. Aaron’s routine, filled with high-speed passes and crisp maneuvers, was reminiscent of airshow performer and Red Bull Air Race pilot Michael Goulian’s precision. (And yes, Aaron and his father have heard of Goulian, who performs in an Extra 330SC.)

Whether they are full-scale aircraft or RC versions, some flying machines command attention regardless of their size. Such is the case with Hultman’s Fokker DR-1. The gas-powered Fokker runs on a 3W342 motor and 40-inch propeller. It boasts a 16-foot wingspan and weighs 116 pounds. The faux engine is made from plywood and car serpentine belts glued onto a three-inch PVC sewer pipe, Hultman said. Hultman researches the history of the actual aircraft he’s building an RC version of so that he can get the details right. He purchased the DR-1 already covered and ready to fly, but said he added several customizations, including weathering and ax handles below the wingtips to match those that were used on the original aircraft. He also bought a doll at Walmart and transformed it into a German pilot, complete with a beard and an airbrushed face to resemble soot stains from the exhaust.

A pair of 1-to-6 scale Sukhoi Su-30 MKK Russian fighters owned by the German team PowerBox Systems were also the talk of the show. Pilots Ralph Losemann and Enrico Thaeter fly formation shows around the world including locations in South America, China, India, and the United Arab Emirates. The aircraft took Losemann and his friends about 2,000 man-hours to build from scratch. Powered by two JetCat engines producing 36 pounds thrust each, the 42-pound fighters built from honeycomb can reach speeds of 140 mph and need 100 meters or about 328 feet to land. The group has been performing at Triple Tree for the past eight years and participates in a noontime airshow offered during the second half of the event. 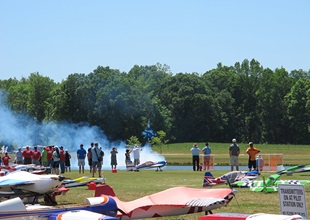 When the team takes to the flight line, spectators and pilots alike stop what they are doing, leave the comfort of the shade from the South Carolina heat, and watch as the fighters start up with a cloud of smoke and take off.

“I feel like I need to speak Russian just to watch,” one spectator commented as the two jets flew precision formation maneuvers reminiscent of military performances—with a few exceptions: Team member Erich Baecker said that full-scale jets cannot perform all of the maneuvers that the RC jets tout. Losemann and Thaeter choreographed their show that includes formation double loops, spirals, and one pilot barrel rolling around the other’s smoke stream.

While it has been common for RC pilots to watch aerobatic performances and military demonstration teams to pick up ideas for maneuvers, full-scale pilots are starting to learn a thing or two from their RC counterparts. RC flying has become so advanced that now airshow performers attend RC events to take notes, said Danny Ramsey of Anderson, South Carolina, who works with airshow performer Skip Stewart. Stewart, who has roots in RC flying, flew his Piper Twin Comanche to nearby Laurens County Airport to attend the event. Stewart might be getting ideas from the RC aircraft performing at what he calls a mini Oshkosh. Who knows, maybe something from this show will turn up in Stewart’s solo demonstration in his highly modified Pitts S2S biplane, Prometheus 2, later this summer at Oshkosh.