Writing it forward (in reverse)

In positive messages, a tradition lives on 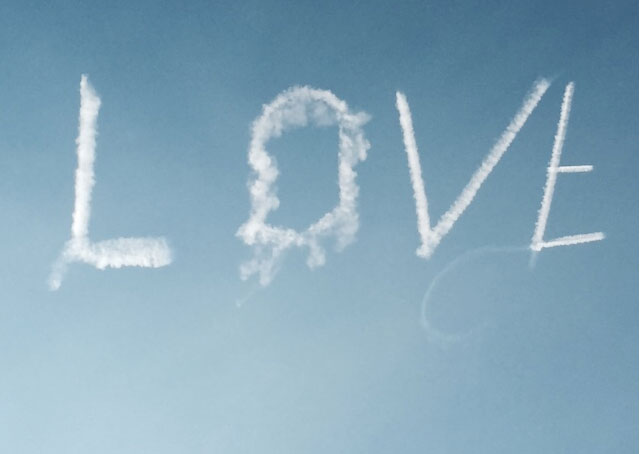 It was a clear day in May, 1922 when Royal Air Force Capt. Cyril Turner wrote the first message, “Daily Mail,” above the Derby at Epsom Downs. History’s first skywriting was followed in October of that same year with another message over New York: “Hello U.S.A.”

In New Orleans, Frank Scurlock followed 93 years later with messages of his own in the closing days of the New Orleans Jazz & Heritage Festival, where, once days of bad weather finally broke April 29, peace signs, smiles, and words like "HOPE" and "COEXIST” began to appear in mile-high letters above the crowds.

Nearly a century-old tradition, words and images written with high-precision flying remain as potent as ever. Festivalgoers and others in and around the city smiled, laughed, hugged each other—and celebrated on social media. One boy dreading the dentist looked up when his father pointed skyward toward the word RELAX drifting slowly overhead. “It actually helped him,” a reader posted on The Times-Picayune website.

For a few days, the words that Scurlock commissioned were the talk of the town, their origin a mystery until reporters found the man writing the checks. Scurlock’s father invented the Space Walk (inflatable bounce house) and with his family built it into a nationwide business, with more than 200 locations today.

Not one word about that appeared above New Orleans, however.

“I certainly didn’t want the publicity,” Scurlock explained in a telephone interview. It was, instead, a mission inspired by his religious belief in acts of charity, and a desire to inspire thoughts counter the steady drumbeat of awful news. “Let’s do something, let’s make a difference. Let’s make a joyful noise.” 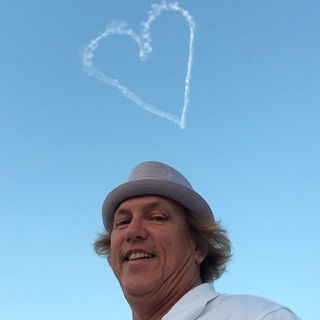 “On an absolutely beautiful day after the storms had passed, we just started writing positive, uplifting things,” Scurlock said. “Next thing you know, people just started feeding on it, wanting more.”

As Sky Magic began drawing smiles and words including “LOVE” and “FAITH” and the aforementioned “RELAX” high above, a new generation of skywriter was carrying the tradition forward: Hammond is a protégé of skywriter Suzanne Asbury-Oliver, who in turn learned the secretive trade from another Pepsi-Cola pilot, “Smilin’ Jack” Strayer, who launched her long career as a skywriter in the Pepsi Travel Air D4D that now hangs in the Smithsonian National Air & Space Museum. Asbury-Oliver continues to draw mile-high letters with her husband and fellow pilot, Steve, under the banner of Olivers Flying Circus, for decades the nation’s only full-time, professional skywriting pilots (featured, in a story that includes mutts of various kinds, spy planes, the Red Baron, and movies, in the March 2003 issue of AOPA Pilot).

Hammond started with Olivers Flying Circus as a “ramp rat,” and “worked my way up,” the pilot recalled in a telephone interview, ultimately earning a five-year apprenticeship that taught him the nuances—and closely guarded techniques—passed down through generations of skywriters. He spared many details of the craft, but did offer a few hints at the challenge: The letters must be carefully positioned, taking wind, sun, and audience location into account. The first line is “usually the easiest one to make, but it’s the hardest one to set up for.”

Precision airmanship is crucial, along with good, old-fashioned seat-of-the-pants sensitivity. 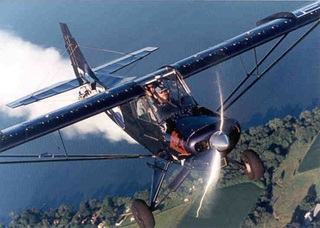 “You’ve got to know the airplane intuitively, because we are completely head outside the airplane,” Hammond said. Once that first line is set, “it’s like building an airplane … the next move on top of the next move.”

All this is being done at altitude and in reverse, so the letters read correctly when seen from below. Spelling counts.

“In the old days, nobody would share any how-tos, and the reason was very simple,” Steve Oliver said. “The people that knew how were trying to make a living.”

The aircraft itself is specialized equipment, custom-built for the job and fitted with a much larger smoke oil tank than the typical airshow pilot needs.

“We’ve been perfecting pumps and injector nozzles for years and years and years,” Oliver said. Horsepower is another essential ingredient. The oil is not actually burned—light oil is vaporized by contact with the exhaust gas, expanding into droplets 50,000 times original size. All this must be done between 7,000 and 14,000 feet, depending on atmospheric conditions, to be visible.

“You can only create so much smoke, and it has to do with the horsepower at altitude,” Oliver explained.

Scurlock bought 10 barrels of smoke oil (about $800 each), though not all of it was used because of the weather. Scurlock said the fuel bill was only $1,300 for the 10-day stint, and the daily flying cost was less than $1,000. The total tab topped out around $25,000, much of that covering the cost of having airplane and pilot wait out the weather, and travel to and from the Olivers Flying Circus home base in Kentucky.

All of that bought a lot of smiles, though. “We affected the city,” Scurlock said. 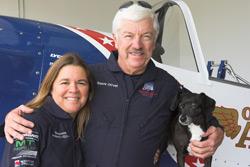 Steve Oliver said another pilot is being trained to fly skywriting missions, though not just any pilot can do it. It is, he said, the ultimate test of precision, ground reference maneuvers far more challenging than those found on practical tests for certificates.

“We’re going to make sure that, as they call it, the lost art continues,” Oliver said. “If you’re really serious and I know that, I’ll help you.”

Hammond said that the pilot rarely gets to hear or see the reactions to the messages drawn high above, though there are a few exceptions. He drew a smiley face for practice a couple of years ago during a maintenance test flight, and was greeted by the airport manager on his return to the fuel pumps. A family had called the airport to express gratitude. They had been gathered for a funeral, and when they looked up they saw the smile.

“They relayed that seeing that smile over the top of their fallen family member was kind of the one thing they needed at that very moment,” Hammond said. “That one sticks with you. Every once in a while you get something cool like that.”

The response from New Orleans was on another scale, he said: “That one caught me off guard, big time.”

Scurlock hopes to continue skywriting over the city, and elsewhere across the Southeast. While response to his online fundraising appeal to pay for future messages has been lacking, the businessman said there is a need for positive thinking in a world full of unrest and unhappiness. Ultimately, he’d like to buy his own skywriting airplane and put it to work for good. 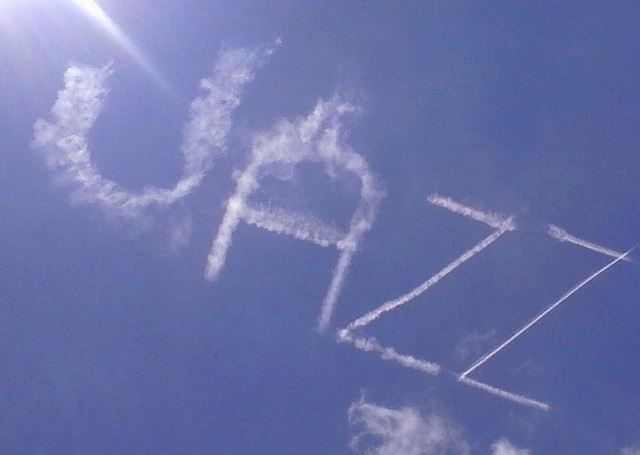