Get the app Get the app
Already a member? Please login below for an enhanced experience. Not a member? Join today
News & Media B-25 training nostalgic for pilots

B-25 training nostalgic for pilots 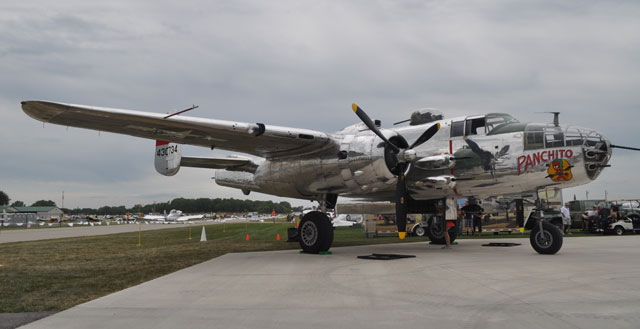 Sabrina Kipp has 29,000 hours of flying under her belt and multiple type ratings including the Boeing 737, but her newest accomplishment—a second-in-command type rating in the North American B-25 Mitchell bomber—has special meaning.

“It’s just kind of nostalgic to fly something that took part in history,” Kipp said, noting the B-25’s service in Pacific and European theaters during World War II.

Kipp is the first to earn a B-25 type rating through the Delaware Aviation Museum Foundation’s new flight training program. The group received an exemption from the FAA to offer flight training in the B-25 Panchito and launched its first two-day course May 2 and 3.

With flight time in the DC-6, Convair, Citation 500, Beech 99, Short 330, de Havilland Canada Dash 7 and Dash 8, and Boeing 737, Kipp, an airline captain, is no stranger to flying large aircraft. The B-25 doesn’t have boosted controls, so it depends on the pilot’s strength to hand-fly the warbird, according to Panchito owner Larry Kelley. Kipp said the B-25 is very stable. “From what I’ve flown in the past, it actually flew quite nicely,” she said, explaining that “you have to muscle it maybe a little more than other airplanes” she’s used to flying.

The program offers a one-hour orientation flight for $3,700 and second-in-command and pilot-in-command type ratings. The orientation flight includes two to three hours of ground training, while the SIC and PIC courses consist of a one-day ground school (eight hours) and then flight training after that based on the student’s schedule. The one-day ground session includes classroom instruction and hands-on learning with the B-25 for emergency procedures and systems operation. The group uses cutaways of different accessories on the aircraft so that students can understand what is going on mechanically when a component fails. The “difference between an emergency and a nuisance is understanding the mechanics of what’s going on,” Kelley said. “You’ve got to understand how everything works.”

Kipp said there’s a lot of information to digest and understand in the one-day ground school. She got the pilot’s operating manual and other materials in advance to become familiar with the aircraft so that she wouldn’t experience the “firehose effect.”

Ground school is open to anyone interested in the B-25 and costs $299. Pilots will receive a B-25 pilot’s operating manual, syllabus, checklists, and a completion certificate; lunch is also included.

Flight training starts with an extensive cockpit familiarization and emergency preparation lesson that’s similar to the “military blindfold test,” Kelley said. The goal, he added, is to be able to handle various problems without taking one’s eyes off the task at hand—flying the warbird. Maneuvers include stalls, steep turns, approaches, and single-engine work, Kelley said.

To be eligible for flight training in the B-25, pilots must have at least a private pilot certificate, multiengine rating, and at least a current third class medical certificate. Kelley said that being current and proficient in multiengine operations is a plus. He also said training in different aircraft is beneficial and added that “doing a single-engine go around to a missed approach in a B-25” without boosted controls is “good training.”

“I thoroughly enjoyed my time,” Kipp said of the training. “They’re putting together a very good school” that would appeal to an “enthusiast” or “someone who really wants to fly the airplane.”

The Delaware Aviation Museum Foundation will be hosting orientation flights Aug. 1 and 2, ground school Oct. 23, and orientation flights and SIC type ratings Oct. 23 through 26 at the Sussex County Airport in Georgetown, Delaware. Kelley said the group will schedule more training dates based on demand and will schedule individual sessions with pilots who contact them.