Get the app Get the app
Get the latest news on coronavirus impacts on general aviation, including what AOPA is doing to protect GA, event cancellations, advice for pilots to protect themselves, and more. Read More
Already a member? Please login below for an enhanced experience. Not a member? Join today
News & Media Salinas kicks off 2015 AOPA Fly-In season

California may have forgotten its sunshine but it did not forget its warmth as the agricultural central California town of Salinas welcomed pilots on May 16 to AOPA’s first fly-in of 2015. It was overcast and IFR part of the day, but pilots of the area were so thrilled that AOPA was coming to town that many scrapped flight plans and drove in—some from as far as four hours away. It was worth the drive.

Skies threatened but stayed balmy as AOPA descended on this small airport—one of the many classic general aviation airports the association plans to visit for its regional fly-ins. Salinas is the first location for 2015. Preliminary numbers indicate that more than 2,600 attendees made Salinas Municipal Airport a weekend destination, enjoying camaraderie, fellowship, and hangar flying stories with fellow pilots and aviation enthusiasts. More than 750 people came in Friday night for a special screening of the new film, Living in the Age of Airplanes, by pilot Brian J. Terwilliger. The movie was part of the inaugural Barnstormers Party. Terwilliger also created the homage to general aviation movie One Six Right, which is about Van Nuys Airport in California. Living in the Age of Airplanes is more of a celebration of commercial airlines and aviation’s effect on the world than GA. The packed audience loved it. In the hour-long Q-and-A session after the film’s showing, one audience member remarked, “It has Academy Award-winner potential.”

A pancake-and-sausage breakfast awaited attendees Saturday morning and nearly 100 Rusty Pilots also attended their own special breakfast, which reintroduced them to the flying world they once loved. Since its inception one year ago, the AOPA Rusty Pilot Program has seen more than 3,600 pilots start their journey to return to the skies. 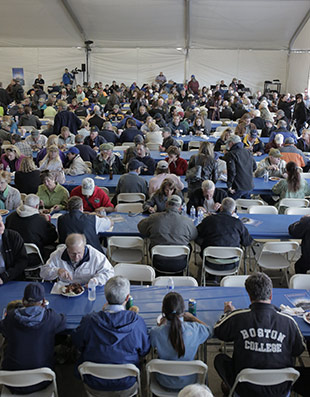 Rusty Pilots, third class medical reform, Automatic Dependent Surveillance-Broadcast, and drones were all on the minds of the hundreds of fly-in attendees who—after enjoying a display of more than 100 exhibitor booths and aircraft, educational seminars by notable aviation experts, and an aerobatic demonstration by Yuichi Takagi—attended the Pilot Town Hall presented by AOPA President Mark Baker. Baker and AOPA staff updated California-area members on the issues affecting GA today.

Of third class medical reform, Baker strongly voiced his frustration with government delays and boldly stated that “I believe the president will sign it [the Pilots Bill of Rights 2] if it gets on his desk.

“It always seems like someone is trying to put us out of business,” Baker said of the challenges facing GA. “Our biggest issue is getting people into aviation. But there is no place like the United States for GA.”

Along with EAA Chairman Jack Pelton, Baker said he is hopeful for an environment that gets people into aviation. Calling it an ecosystem—aviators, aircraft, and airports—both GA leaders said they recognize the importance of fostering an environment that celebrates aviation.

Baker hosted an ice cream social, provided by partner Sporty’s Pilot Shop, after ending his talk by letting attendees know how he feels about his AOPA presidency: “No, you can’t have my job,” he joked. “Because I am having a blast.”

The next AOPA Fly-In is June 6 at AOPA’s headquarters on the Frederick Municipal Airport in Frederick, Maryland.