Get the app Get the app
AOPA Members DO more LEARN more SAVE more - Get MORE out of being a pilot - CLICK HERE
News & Media Texas storms scrub Ladies Love Taildraggers, Bluebonnet fly-ins 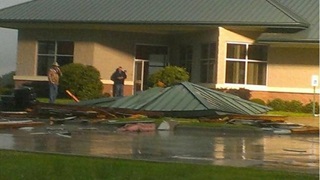 The Ladies Love Taildraggers Fly-in that had been scheduled for May 28 through 30 has been canceled in light of storms and floods that have pummeled Texas.

The fly-in was to have taken place at Sulphur Springs Municipal Airport in Sulphur Springs. In announcing the cancellation on May 25, Ladies Love Taildraggers Fly-in organizer Judy Birchler said the latest round of storms tore a cupola from the top of the Sulphur Springs airport's terminal building and blew a Grumman Ag Cat onto a fuel truck.

Sulphur Springs Airport Manager Joey Brown confirmed the damage on May 27. “It could have been a lot worse,” he said, adding that no one was injured. Tornadic or straight-line winds blasted the airport on May 25 about 4:45 p.m., ripping off the cupola, he said. The winds tore the tiedowns on two Ag Cats and blew them 100 feet and 250 feet, respectively, into the fuel trucks, he said. While the trucks were totaled, he said self-serve fuel is available.

With the ground already heavily saturated—the airport’s grass runway was not in use—and more rain and thunderstorms in the forecast this week, Birchler said, “Mother Nature presented a situation this year no one could have forecast.” There is no rain date for the event, she said.

Meanwhile, American Legend Aircraft Co., whose headquarters are located at Sulphur Springs, reportedly sustained some storm damage to some hangar doors. American Legend, which builds the Legend Cub and Super Legend, was to have hosted tours of its facility and offered demonstration rides to the fly-in visitors. Brown said an American Legend employee reported a rollup hangar door on the company’s paint and metal fabrication hangar was blown in, and a tractor-trailer used for steel storage was blown over. A telephone call and an email to American Legend were not returned.

The Weather Channel reported that some parts of Texas received more than 20 inches of rain in May, with the pattern expected to continue, according to National Public Radio.

Redbird Skyport FBO, San Marcos, Texas, has postponed the May 30 Bluebonnet Fly-In at San Marcos Municipal Airport until June 6 "due to the hardships faced by our community during the recent severe storms and resulting floods," General Manager John Koenreich announced May 27.

Koenreich said the postponement will allow the FBO to continue to support ongoing rescue and recovery efforts that have been operating out of Redbird Skyport.

"In addition, we will be donating all proceeds from the Bluebonnet Fly-In to the Salvation Army in Hays County, Texas," Koenreich said.