Get the app Get the app
AOPA will be closed July 4th, in observance of the Independence Day holiday. We will reopen at 8:30 am ET on Tuesday, July 5.
News & Media Training Tip: 'It always does that'

Training Tip: 'It always does that' 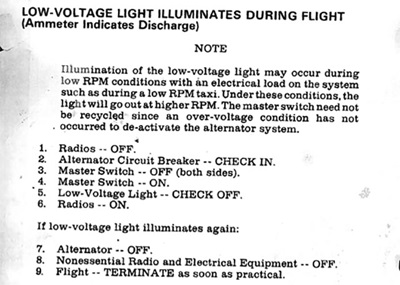 A student pilot is taxing a Cessna 152 to the runway for an early morning flight lesson. The flight instructor in the right seat points to a flickering light on the panel and asks the student whether it is cause for concern.

"It always does that," the student responds, reciting information from the pilot’s operating handbook explaining that the light, a low-voltage warning, may illuminate "during low RPM conditions with an electrical load on the system such as during a low RPM taxi." At higher rpm, the light should go out.

A short time later, en route to the local practice area at cruise power, the student pilot’s eye is drawn back to the low-voltage light, now steadily illuminated. And the ammeter is showing a discharge.

This time, the aircraft’s alternator really has malfunctioned. Did you miss something out of complacency about a warning light that "always does that"? Do you go beyond a perfunctory check of electrical system components such as circuit breakers?

Save that question for the coffee shop. Right now it’s time to run the appropriate emergency-procedures checklist, and depending on what that action reveals, make a decision whether to terminate the flight—and where.

After running the Cessna 152’s six-step checklist for a discharging ammeter, it's possible that order will be restored and you can continue with the planned lesson.

No such luck? Then turn off the alternator and any unnecessary electrical equipment and terminate the flight “as soon as practical.” This is when you will decide where to land, based mostly on traffic conditions at the airports you are considering.

You may lose communications radios. Would you consider it wise to return to your busy towered home airport for a no-radio arrival? Or would it be a better decision to land at a nearby nontowered field, even though that airport can also get quite busy? It’s a judgment call.

There are numerous electrical system failure scenarios, but one shared characteristic is stealth. Will you be ready to catch or trouble shoot a problem?