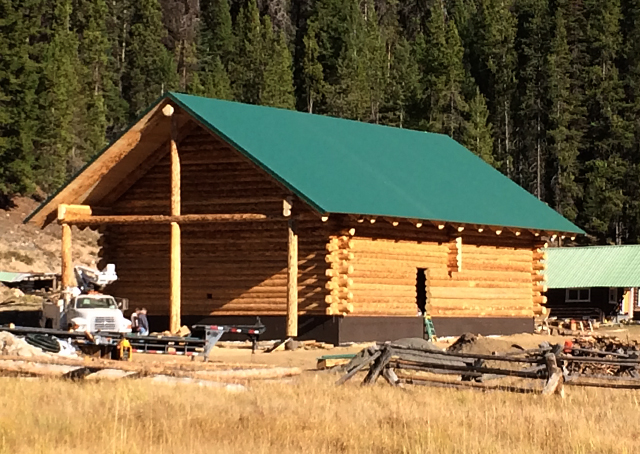 Seven years after a fire burned Idaho’s historic Big Creek Lodge to the ground, the structure at the gateway to the remote Frank Church Wilderness of No Return is rising from its ashes with the help of an active pilot community, financial donations, and the cooperation of the U.S. Forest Service.

Before it burned down, the 75-year-old lodge was operated by private individuals and offered a safe haven for outdoor enthusiasts from its outpost on publicly accessible Forest Service land.

Big Creek’s location adjacent to a challenging backcountry airstrip allowed pilots, backpackers, fishermen, hunters, and others visiting the Middle Fork of the Salmon River to experience the area’s natural beauty. Nearby, Idaho’s Salmon River Mountains pierce the sky at 10,000 feet. According to the Forest Service, the rugged beauty of wooded ridges rising from the deep river gorge rivals the Grand Canyon.

“It’s so remote, so rugged, that a person must make the effort to go there and that’s what makes it so special,” said Colleen Back, a Cessna 182 pilot and vice president of the Idaho Aviation Foundation, which is helping raise funds to complete the lodge.

The devastating 2008 fire changed everything when the lodge, which provided showers, lodging, and meals, was declared a total loss. Now, the nonprofit Idaho Aviation Foundation is working in partnership with the Forest Service and an army of volunteers to restore the Big Creek Lodge to its former glory—and then some. 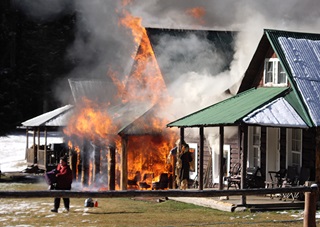 “This is a place to disconnect from everyday life,” said Back. “When it burned down, pilots lost a wonderful public asset. We wanted to rebuild the lodge so that pilots who dream about the outdoors will always know there’s a place for them.”

After the fire, the lodge’s private owners were struggling to rebuild the facility because of the expense of finding labor, materials, and transportation to the remote area. Boise, Idaho, is more than five hours away by car or truck, and the next nearest city of size is McCall, about three hours away. “It’s a spectacular flying location but unfortunately airplanes can’t even bring all of the supplies in,” Back said. “It has to be by road.”

Ground was broken for the new lodge in late June ,and pilots routinely flew into the rugged mountain airstrip throughout the summer to assist professional builders and other volunteers with construction. They worked feverishly to raise Big Creek Lodge’s four walls and erect a roof over the rustic structure before the first snowflakes blanketed the wilderness, Back said.

The log walls were assembled from 174 nearly 40-foot-long hand-hewn timbers trucked in from 160 miles away. The Idaho Aviation Foundation’s fundraising efforts included sponsorship of the logs themselves for $1,000 apiece and one choice of two large paintings of the scenic lodge for $500. Back said donors purchasing a raffle ticket for $50 could earn the chance to be awarded a restored fastback 1960 Cessna 172A. Proceeds from the raffle will help secure the final wave of construction in 2016.

So far the Idaho Aviation Foundation has raised more than $700,000 and is about three-fourths of the way to its goal of nearly $1 million, she said. A water-driven electrical station, plumbing, a commercial kitchen, a fire suppression system, a wrap-around porch, and interior and exterior furnishings will complete the plan.

Back said most fly-in backcountry posts in Idaho are privately owned so they may choose to change directions for business reasons. However, Big Creek Lodge will always remain open to the public. She said the Idaho Aviation Foundation, known for preserving Idaho’s heritage of backcountry flying, stepped in and partnered with the Forest Service to ensure the lodge would be rebuilt and available for anyone seeking a smidgeon of comfort and safety in the Lower 48’s largest wilderness area.

“The [Idaho Aviation Foundation] took on this project four years ago as a way to build awareness that the aviation community can give something meaningful to the general public in addition to the flying public—and it is bearing fruit,” she said.

While Big Creek is special from an historical standpoint, the aviation experience has been equally memorable for pilots seeking challenging backcountry flying. “The landing strip is 3,500 feet long but at 5,743 feet in elevation, it’s deceptively difficult. It’s not that long, especially if you have a tailwind when you are trying to get out of there,” Back said.

John McKinney, a Maule M-7 pilot from Oregon who volunteered to install the septic system, spent nine days at the site with his crew and describes the unique challenges and allure of flying to Big Creek.

“One of the more memorable things is on short final it’s a one-way strip and there’s no go-around. On one approach my wife Lora Lee said ‘Elk, elk,’ and I looked up and there’s a full grown elk standing there in the runway. I instinctively wanted to hit the horn but I goosed the power to scare him off instead. He looked up and started running straight ahead, directly across the runway. He was far enough and fast enough that we missed him.”

McKinney said experiencing the rugged environment and sharing Big Creek with its abundant wildlife amid stunning beauty helps make the outpost special. His wife saw a bear wander across the road when she went to make lunch for the crew, and during the septic system installation a large deer wandered into camp.

Construction should be complete by the end of 2016, and plans are to have the new Big Creek Lodge fully functional for a 2017 grand reopening. Back said, “It’s a dream for most pilots to fly in a remote location. We want to guarantee that dream can be alive.” 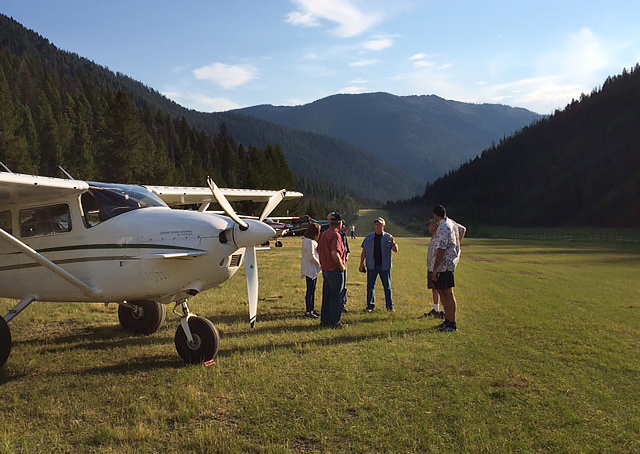