Get the app Get the app
We will be performing maintenance on our systems Sunday, 8/21, beginning at 12:00 A.M. ET and ending at 6:00 A.M. ET. During this time, you may experience intermittent service outages. We appreciate your patience.
News & Media Pilot examiner gives his 10,000th checkride 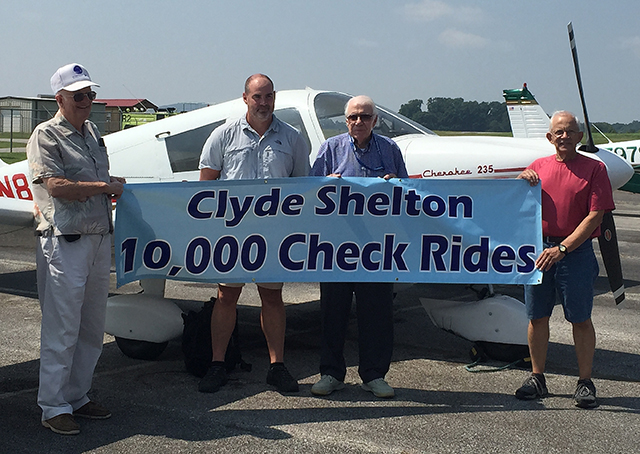 A little aviation moonlighting after a long day of working on NASA space projects turned into an astonishing number of checkrides for Designated Pilot Examiner Clyde Shelton.

On Sept. 5, the 84-year-old examiner signed his name in a pilot’s logbook for the 10,000th time. A sky blue banner announced the accomplishment after a student from Fort Campbell, Kentucky, earned his wings in the turbulent Southern summer skies. Shelton then celebrated the milestone with close friends and family members at Executive Flight Center in Huntsville, Alabama.

“It was a small reception because we were waiting to see what the weather would do. It was kind of touch and go for a while,” Shelton said. The DPE touched down just long enough on Labor Day weekend to cut a cake and pose for a few photos in his honor.

Before he was a DPE, Shelton worked on the Jupiter-C, which launched Explorer 1, America’s first satellite, and the Redstone project, which launched Alan Shepard on a suborbital flight aboard the Mercury-Redstone 3 in 1961. In Huntsville, one of Shelton’s colleagues was Wernher von Braun, the father of modern rocketry.

Shelton’s son Scott, a Delta captain who soloed at age 16 under his dad’s watchful eye, said, “Dad would leave work from NASA and go teach people how to fly every evening, and then fly all day Saturdays and Sundays too, after church. He’s a very prolific examiner because during his retirement age, that’s his life. He lives for aviation. He either helps people get started or furthers someone’s aviation career.”

Family and friends say the longtime AOPA member and 38,000-hour pilot is all about flying because he never had golf or other hobbies except aviation. He even soloed his grandson Nevada, who is now a Black Hawk pilot in the U.S. Army, and wife, Sara, who always had a little trouble landing the family’s Cessna 150.

“I was looking through Mom’s logbook one day and I asked Dad about all the no-flap landings in there. He told me that she couldn’t remember how to put the flaps down so he taught her how to perform a no flap landing instead,” said Scott.

“He gets a twinkle in his eye whenever someone talks to him about aviation,” Scott continued. “He’s no Santa Claus, though. He’ll bust you in a minute if you violate an FAA guideline.”

For decades, scores of nervous potential pilots have flown hundreds of miles to Alabama’s northeastern hill country to take their checkrides with Shelton. What’s his secret? “I’m not Santa Claus but I try to make pilots feel at ease. I know what they’re going through. I’ve gone through that myself too, so I talk to them for a while and then they relax,” said Shelton.

“At one time I was giving checkrides to almost every school in Atlanta and that went on for several years. You won’t believe this but I had a guy from Las Vegas last week. He Googled DPEs that gave checkrides and he did a real good job here. Now he’s working on his instrument rating and he said he’d come back here for his instrument checkride, too.”

Max Gurgew, an Alabama flight instructor, DPE, and safety representative, said Shelton is a wonderful person and has touched the hearts and souls of many pilots in the role of examiner, flight instructor, mentor, and friend in northern Alabama and southern Tennessee. “He's one of the great ones, that guy who still receives appreciative radio calls over the Unicom from airline and corporate pilots flying overhead who had, in their past, worked with Clyde as a check ride applicant or student,” Gurgew wrote in an email.

“We’re pretty excited for him, Clyde’s a great fellow and is not one to toot his own horn,” said Executive Flight Center’s Donna Meyer, where Shelton does many of his checkrides.

When asked if conquering checkride number 10,000 was a big load off his shoulders, the straight-shooting DPE paused for a moment and reflected: “Yes it is, but I just enjoy flying. I thought about retiring but when my wife, Sara, asked me what I’d do, I had to think about it for a minute. I’ve been doing this for so long I decided I’m going to try it a little longer.”