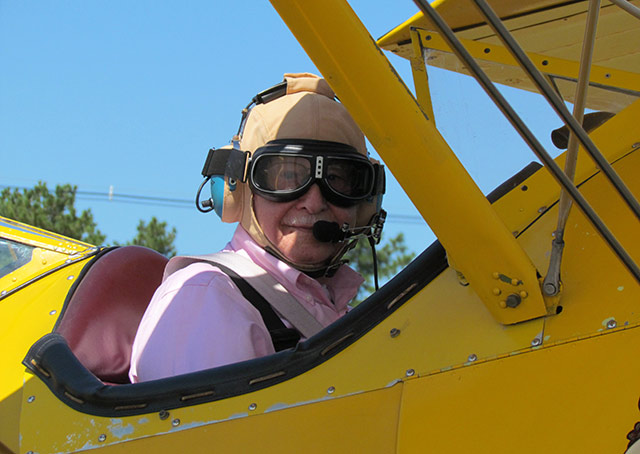 In 1992 Stephen Coonts published the account of his tour of America in a Boeing Stearman called the Cannibal Queen. That former Canadian trainer and U.S. military trainer, has done as much as anyone to inspire a passion for flying. This past Labor Day it performed another service—honoring the nation’s World War II veterans.

The 1942 biplane is now used to provide biplane rides out of Ocean County Airport at Toms River, New Jersey, and is operated by 53-year-old Jim Lonergan, who is only mildly concerned that he may never grow up and will continue to play with airplanes as long as possible. This year he decided to cancel the usual $250 to $700 rides and give free ones to pilots who served in World War II. He got priceless memories in return.

In all there were seven veterans in their 80s and 90s who took him up on the offer. One confined to an electric wheelchair didn’t fly; he just wanted to touch the Stearman and spend a little time with it. He wheeled out to the aircraft alone, stayed with the airplane five minutes, and left, mission accomplished. Another returned with what Lonergan calls the “Stearman smile,” got out, hugged Lonergan’s wife, Susan, and walked into a nearby building at Ocean County Airport. A few minutes later he emerged, renewed the hug, and left again.

Susan took the photo of Morris Spector that appears with this article. Spector, of Toms River, learned to fly in a Fairchild PT-19 and later flew a Vultee BT-13. Like the others, he ended his flight with a Stearman smile. All the veterans got to fly the aircraft if they so desired.

Lonergan, an instrument-rated flight instructor, said he just wanted to give back to thank the veterans for their service. He plans to do it again next year.