Get the app Get the app
AOPA Members DO more LEARN more SAVE more - Get MORE out of being a pilot - CLICK HERE
News & Media Aviation Legends: The world according to Clay Lacy

Aviation Legends: The world according to Clay Lacy 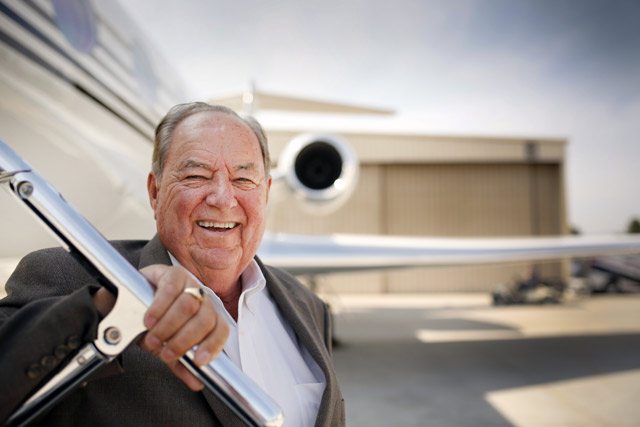 Aviation legend Clay Lacy has become synonymous with jet aircraft and Southern California, so it’s with some surprise that when he appears at a Wichita Aero Club luncheon, he’s introduced as a native son. Yes, Clay Lacy is so much a part of American aviation, he was even born and raised in the “Air Capital of the World.”

Known as “the flyingest pilot ever” to many, Lacy knew he wanted to fly at age 7, made gas-powered model airplanes at age 8, and convinced his grandmother to allow an airstrip on part of her 640-acre Wichita farm at age 12. His first flight was in a Beechcraft Staggerwing in 1939. He “soloed” at age 15—“misrepresenting” his age, claiming to be 17. “I never thought about it as lying, I just thought it would save me two years,” he says.

Speed and flying have been Lacy’s mantra his entire life. He has flown more than 53,000 hours in more than 300 different types of aircraft, and has 32 type ratings. At 82 he is still actively flying the jets he first brought to California in the mid-1960s, is still running the show at his Van Nuys FBO that boasts a fleet of 70 jets and 300 employees, and telling his tall tales of aviation—most all of which are amazingly true.

Lacy’s father died in 1939 from tuberculosis. In treatment, his father had been in a TB sanitarium and the boy and his mother went there on Saturdays and Sundays. He couldn’t go inside, but the facility was near the Wichita airport so the young boy watched the airplanes come and go for hours at a time. At age 7, after his father died, his mother took him to visit a former neighbor who worked at Frank Phillips Field in Bartlesville, Oklahoma. There he saw photographs taken of the Andes Mountains from an aircraft.

Toward the end of World War II, a local pilot, Orville Sanders, started buying surplus liaison aircraft and flying them near Lacy’s grandmother’s farm. Lacy wasn’t old enough to drive but rode his scooter down to the field and spent days with Sanders, helping him paint the aircraft—and learning to fly. Sanders told the young man his dream was to establish an airport, so Lacy convinced his grandmother to rent Sanders 40 acres, just enough for a half-mile runway. At Cannonball Airport, Lacy started flying solo and going out to bring back airplanes for Sanders. At 14 Lacy got a student certificate, adding two years to his age. By the time he was 19, he had logged 1,500 hours and easily got a job with United Airlines at the “age” of 21 and co-piloted a DC–3 from Los Angeles.

Lacy was flying for United when the Korean War began. Fearing he’d be drafted, he joined the California Air National Guard in Van Nuys and took military leave from United. He flew the North American P–51 Mustang, the F–86, and later the T–33 and C-97.

Paulson introduced Lacy to Bill Lear, who was developing an executive airplane. Tests and development of what became the Learjet nearly never happened because Lear was always battling funding problems. It was Lacy who convinced him to launch a distributorship program. Lacy and Paulson got 11 western states, operating out of Van Nuys. Lacy was the manager of sales.

One of the fledging company’s biggest advantage was its proximity to Hollywood. Lear wanted publicity and he told Lacy to fly anyone who had an interest in the aircraft. He flew singer Frank Sinatra more than 20 times before the Rat Pack leader bought his jet. Actor Danny Kaye not only bought a Learjet, he joined the company as vice president of public realtions. The Van Nuys enterprise became known as “Hollywood’s private airline.”

From 1964 until 1970, Lacy consistently placed second and third in the pylon races. In 1970 he finally got his first-place win in the Unlimited class. He served as president of the Professional Race Pilots Association from 1966 until 1970. Also in 1970, he and Paulson flew a four-engine Douglas DC–7 nicknamed Super Snoopy in the California 1000 Mile Air Race in the Mojave desert. They placed sixth out of 20.

Lacy also won a cross-country race from Milwaukee to St. Louis and The Great Race from London to Victoria, British Columbia, in a Learjet. In 1988, flying with former astronaut Neil Armstrong, Lacy set an around-the-world speed record flying a Boeing 747 SP, called Friendship One. In all, Lacy set 29 world speed records.

Hollywood was always a part of Lacy’s landscape and it’s no surprise that he developed a camera system on the Learjet that revolutionized moviemaking. The camera system, Astrovision, could film 360 degrees and was the first such system that offered continuous and unrestricted use. Lacy made another name for himself in Hollywood, photographing air-to-air scenes in movies such as Top Gun, The Great Santini, and Armageddon. He is a member of the Screen Actors Guild.

Lacy continues to fly regularly and Clay Lacy Aviation recently underwent a $10 million expansion at its Van Nuys location, increasing its footprint by six acres. He offers a scholarship program for airframe and powerplant mechanics at a local college and is on site in his FBO offices daily. “Van Nuys has been good to me,” he says. 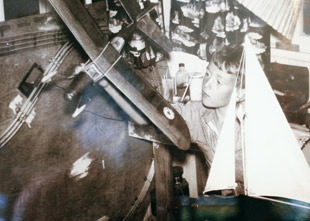 Lacy created his first gas-powered aircraft model at the age of 8 at his grandmother’s Wichita farm. 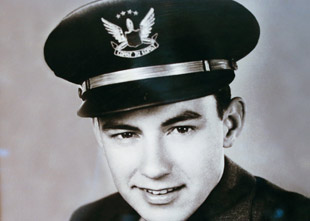 Flying United
“I flew for United for 41 years. I retired with seniority number one. I did all these other things while I had a full-time job at United. I don’t know how the heck I did it. I loved flying to Australia, layovers in Singapore. It was a great time.”

Lacy started as a co-pilot on the Douglas DC–3 at Los Angeles International Airport, where he was based his entire career.

On flying in the guard
“My boss at United knew my real age. It was 1952, the Korean War, and there was a concern I’d get drafted. December 3, 1952, I took leave from United and spent 20 months in the guard. We were in Bainbridge, Georgia. I was offered a chance to get out early but I thought I am only going to get to do this once in my life. Wow, the aerobatics and the aircraft we had! So I didn’t get out early. I got my wings and commission March 30, 1953.” 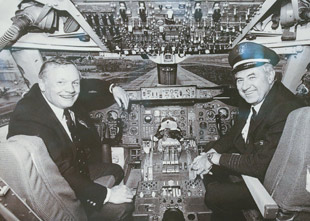 Lacy took a rare spin in the right seat, deferring to his friend Neil Armstrong (above) on Friendship One. Lacy retired from United in 1992. 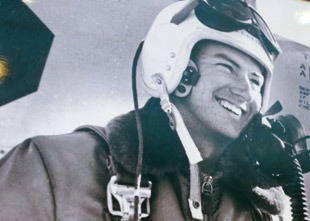 In the guard
“I loved flying in the National Guard. I was so busy. We had so much fun and I met so many friends and we flew so many aircraft­—F–86 Sabre jets and things. They had me change the whole instrument training program. I had the backing of the group commander and we changed a lot of things.” 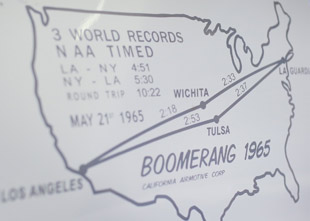 Lacy and his friend, Jack Conroy (designer of the Pregnant Guppy), flew the Learjet round-trip across the United States sunrise to sunset in the same day, a feat they called Boomerang. 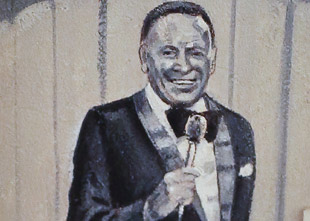 Sinatra
“I sold Frank Sinatra a Martin 404 and that opened the way for him to then buy a Learjet. All the stories about Frank Sinatra just weren’t true for me. I flew Frank many, many times and he was a princely guy. The first time he met Bill Lear, I had gone to Palm Springs to pick up Frank and bring him back to Burbank. He had Lana Turner with him. Lear’s daughter was named Tina and Frank said, I have a daughter named Tina, I like that name. I never had a bad experience with Frank. And all I can say about the sixties is they were a good time.”

Singer Frank Sinatra was one of Lacy’s first Learjet customers and his portrait is drawn inside Lacy’s Learjet. 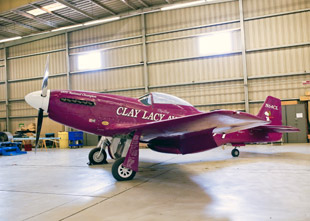 Purple P–51
“When we bought the P–51, Al Paulson asked, have you thought about what color you want to paint it? I hadn’t and he said, good, we can paint it purple. Al’s purchasing agent had ordered 1,500 gallons of purple paint instead of 50. It’s OK. People liked it.”

The “Purple People Eater” Reno-winning P–51 Mustang is embalzoned with a drawing of the Charles Schulz cartoon character Snoopy. 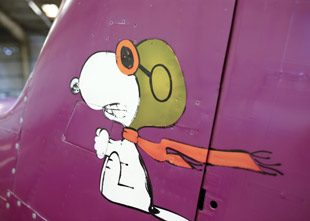 Snoopy
“I had this friend who was into Snoopy. The kids liked it. Charles Schulz gave me Snoopy stuff. I had a big stuffed Snoopy in the back [of the P–51]. There’s still one upstairs in my office.”

Jet flying
“Corporate jets have changed the world. You can get in an airplane and go anyplace in the world, and much faster than the airlines. It [a corporate jet] goes when you want to go. When you land and go and conduct three hours of business, three hours later this airplane is sitting here waiting for you.” 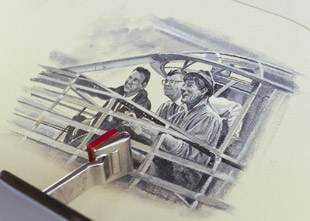 Bill Lear
“Bill was such a smart guy. He did far more things right than he did wrong. People say Bill Lear didn’t design the Learjet, but he made every decision.”

Bill Lear (left) and actor and comedian Danny Kaye with Lacy in a Learjet mockup, as painted inside Lacy’s Learjet, which is kept in Lacy’s personal hangar in Van Nuys. 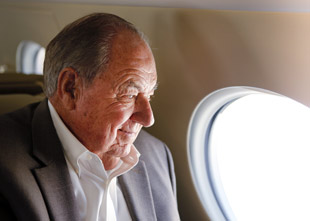 Looking back
I was always so busy flying; I didn’t have time for anything else. I quit keeping a logbook years ago. I was so busy I hardly had time to write in it. I have around 53,000 hours and I still enjoy it. I guess I don’t run and try to get into every airplane like I used to. But I still like to experience new things. ”

The movies
“I had a lot of fun shooting movies. I shot every inch of the air-to-air film in Top Gun. I’ve flown more than 2,000 flights for commercials and movies, mostly airline commercials. You have to use your own judgment to make it look real: you just can’t film a dogfight, it’s too big. We had a system figured out and I came up with using the Learjet. I can accelerate and decelerate so fast. Aerial photography has been a fun thing for me.”