Get the app Get the app
Already a member? Please login below for an enhanced experience. Not a member? Join today
News & Media FAA talks drone integration 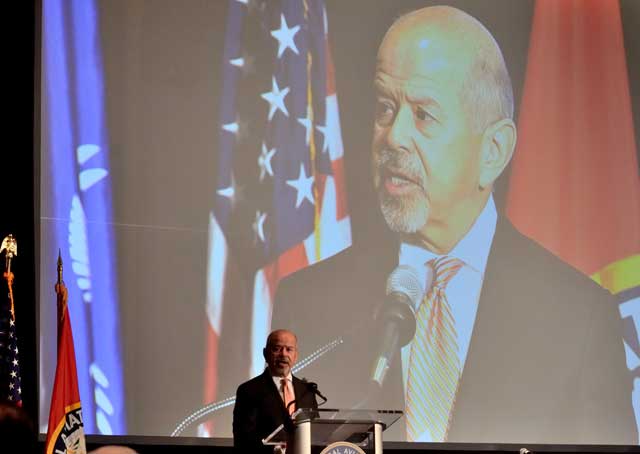 The FAA hosted its first UAS Symposium in Daytona Beach, Florida, April 19 and 20, inviting members of the unmanned aircraft system community—from manufacturers to commercial users to educators—to provide feedback directly to senior FAA decision makers about UAS integration into the National Airspace System and other related topics. FAA Administrator Michael Huerta and Deputy Administrator Michael Whitaker were among agency leadership at the symposium, which was held in conjunction with Embry-Riddle Aeronautical University.

Some 567 attendees traveled to Florida to participate in the conversation—a level of participation that apparently surprised some FAA staff, particularly considering the relatively short notice the forum received.

Huerta presented the symposium’s opening keynote address. Its first day was dedicated to presentations, primarily by FAA staff, that explained where the agency is heading with UAS, as well as the challenges that it has identified. The second day’s breakout sessions were the FAA’s opportunity to listen to stakeholders. “We know most of you won’t agree with everything said on the stage this afternoon, and that disagreement can lead to strength. The agency wants to remain engaged with stakeholders as integration moves forward and UAS usage continues to grow,” he said.

“The FAA is committed to safe, efficient, and timely integration of UAS into our airspace. We are dedicated to moving this exciting new technology along as quickly and safely as possible,” read a Huerta quote displayed on a banner at the event. His remarks at the symposium, and those of other FAA leaders, reiterated that theme.

The agency’s goal is to integrate UAS in the safest manner possible, Huerta told attendees. “We need the collaboration and expertise of all industry stakeholders. In aviation, safety is a shared responsibility.”

Huerta compared today’s explosion of interest in UAS to the intense interest in space seen in the 1960s.

“The FAA is doing some self-reflection,” he added. Are we moving fast enough? Are the FAA’s old rules working and if not, why not? “Safety and innovation can coexist,” he said. “We feel we have been hitting the sweet spot lately.”

A drone registration program launched in December 2015, shortly before Christmas, led to 475,000 registrations, he said. In March a committee began working to address the issue of drone operations above people; he said the agency streamlined the application process for Section 333 exemptions—which allow small UAS to be used for commercial purposes—and that the final small UAS rule should be released in late spring. Huerta said the Part 107 final rule should largely eliminate commercial operators’ need for Section 333 exemptions.

Huerta said that on April 20, all six of the FAA’s UAS test sites—as well as additional traffic generated by UAS simulators—were being used to test NASA’s UAS Traffic Management (UTM) program. The NASA research seeks to develop airspace integration requirements that would enable safe and efficient low-altitude UAS operations. In its first iteration, UTM is focusing on geofencing, altitude rules, and scheduling of UAS trajectories to provide integration. Later this year, researchers will test technologies that allow dynamic adjustments to airspace availability, as well as contingency management.

“We’re still at the very beginning of what’s going to be a long process,” Huerta said. “We have to constantly evolve,” and will work with UAS stakeholders every step of the way.

Whitaker moderated the keynote panel April 20 and focused on other viewpoints and opinions.

“The misconception is that the helicopter industry dislikes UAS,” said Matt Zuccaro, president of the Helicopter Association International. “We embrace the technology. What we all want is a safe and efficient airspace system, with UAS integrated.

“A number of our missions can be transitioned over to UAS vehicles, and we’re aware of that. We look at this not as a threat, but as a business opportunity for us,” he continued, adding that HAI recently added a UAS membership category. Zuccaro said existing helicopter operators could become the majority of commercial UAS operators in the United States.

“We, as hobbyists and modelers, I think, share the same concerns as everyone else in this room,” said Richard Hanson, director of government and regulatory affairs for the Academy of Model Aeronautics. AMA members have always observed strict safety protocols, and enforcement of the rules takes place at the club and local levels. “Everyone that enjoys this hobby is very protective of the hobby,” he added.

“This new UAS technology has actually fostered a resurgence” in energizing a new generation about aviation and its possibilities, he said, noting that 25 percent of AMA’s 200,000 members are younger than 20. However, the organization is concerned about legislative efforts with unintended consequences to the model aircraft industry.

The perspectives of local municipalities, privacy concerns, and other viewpoints also were presented.

Whitaker said at the symposium’s conclusion that the FAA would like to see the symposium—or a similar event—take place annually, so the agency can continue to engage with the UAS community and maintain its understanding of issues and user needs.