Get the app Get the app
Already a member? Please login below for an enhanced experience. Not a member? Join today
News & Media Pilot Briefing: Fly-Outs

‘Home away from home’ 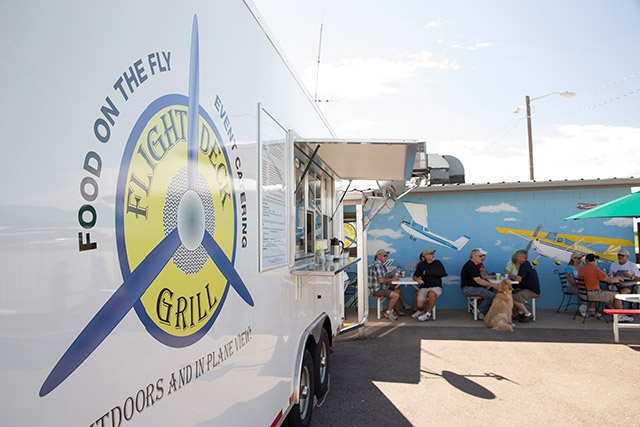 The best days for flying are the best days for dining at Flight Deck Grill. Outdoor seating at the mobile café gives patrons a center-field view of skydivers, vintage taildraggers, and a range of amateur-built aircraft at Longmont, Colorado’s Vance Brand Municipal Airport. In the seven years since Dian Rennicke and her husband, Chad, set up a small street cart at the airport, their “rigstaurant” has grown to become the nucleus of a friendly airport community.

Dian and Chad said they came up with the idea for the business in 2009 while sitting in front of the local flight school on “Liar’s Bench,” where locals chat and watch airplanes. As they watched the sunset, Dian said, they lamented that there was no place to get a burger and a beer while they enjoyed the view.

The couple set up shop with a basic menu and a stainless-steel food cart. If it was VFR and 50 degrees or higher, they were out on the asphalt, and their following began to grow. The next spring, they set up at the airport in a custom trailer that Dian affectionately calls “Tinker.”

The restaurant is open for breakfast and lunch on good VFR days in the spring, summer, and fall. It is scheduled to open for the 2016 season April 29. Dian puts up a sign and lets fans on Facebook know when it will be away for airshows in the area. Items on the menu include the “Whirly Bird” chicken sandwich, the “Crop Duster” veggie burger, and the “Midget Mustang” kids’ meal.

On a summer day, patrons sat under green umbrellas and admired aircraft on the ramp. “This is my home away from home,” said aircraft owner and builder Mike Seavall, a Flight Deck Grill regular.