Get the app Get the app
Already a member? Please login below for an enhanced experience. Not a member? Join today
We are currently experiencing issues with our phone system. We apologize for the inconvenience.
News & Videos Safety Pilot Landmark Accident

Editor's note: An earlier version of this article incorrectly cited the tachometer reading as evidence of the power output of a Mooney M20E. AOPA regrets the error. 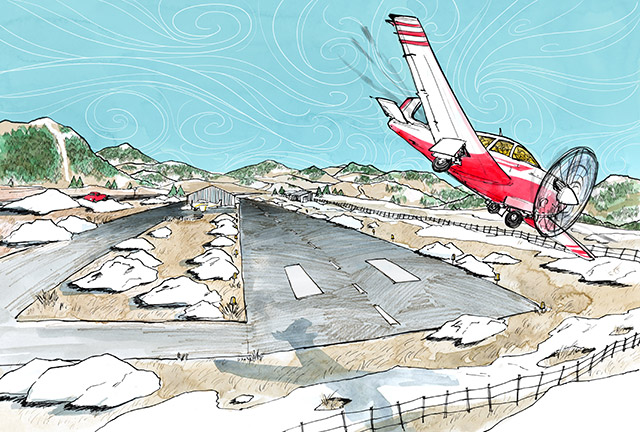 It was a little more than three years ago when a Mooney pilot decided to challenge a big wind in New Mexico. The results were catastrophic and serve as a reminder that local knowledge and published warnings about local airport conditions should be heeded. It’s also a case of not understanding the realities of weather, despite personal confidence and limited experience.

In the early afternoon of March 3, 2013, the pilot and three passengers arrived at the Angel Fire, New Mexico, airport (AXX) en route to the San Antonio, Texas, area where they lived. The weather was not conducive to flying light aircraft this day, and the airport attendant questioned the pilot about his intention to fly in such conditions. According to the National Transportation Safety Board, “The pilot indicated that he planned to fly and that the winds would not be a problem.”

The automated weather observation system (AWOS) was reporting winds out of the west from 250 degrees at 33 knots gusting to 47 knots, visibility 10 miles, a clear sky, temperature 47 degrees Fahrenheit, dew point 17 degrees F, and a barometric pressure of 29.93 inches of mercury. The density altitude was calculated at 9,549 feet.

The north/south runway at Angel Fire is 8,900 feet long, and the airport elevation is 8,379 feet.

The short-body Mooney M20E, loaded with four people, taxied out to Runway 17. An FBO employee relayed the current wind and altimeter to the pilot, who repeated the information. “Due to snow piles on the airfield, the FBO employee could not see the takeoff and next saw the airplane airborne with a significant crab angle into the wind, about 40 degrees right of the runway heading,” according to the NTSB report. “The airplane rose and fell repeatedly as its wings rocked. Then the airport employee saw the airplane’s right wing rise rapidly. The airplane rolled left, and descended inverted with the airplane’s nose pointed straight down.”

A witness driving by the airport reported that the Mooney was struggling and only reached an altitude of about 100 feet, hovering momentarily before the left wing dropped and the aircraft descended nose-first to the ground. There were no survivors.

The 33-year-old pilot held a private certificate for airplane single-engine land and a current medical certificate. His insurance application, filed about six months prior to the accident, reported 459 hours total flight time with 384 hours in type. The pilot’s occupation was engineering; he had worked at Mooney Aircraft Co. and Boeing, and was employed at the time by SyberJet.

The pilot told the airport manager that he had flown the accident airplane for five years and that Angel Fire was the highest airport that he’d visited. His experience flying to other high-altitude airports was unknown. The evening before the accident the pilot’s cousin, who lived in the area, talked about airplane crashes in and around Angel Fire. The pilot said that flying in wind did not bother him.

The logbooks of the 1966 Mooney burned in the post-impact fire, but receipts showed that the last annual inspection occurred in December 2012 with total airframe time of 4,752 hours. The engine had 1,736.7 hours since major overhaul. At the time of the accident the tachometer read 4,785.8 hours.

An old copy of the airplane’s weight and balance found in the wreckage was used to estimate weight and balance. Luggage was destroyed but estimated at 60 pounds. With approximately half fuel, takeoff weight was calculated at 2,519 pounds, about 56 pounds below maximum. However, the center of gravity was computed slightly aft of the envelope.

After impact, the airspeed indicator read 81 mph. The attitude indicator showed a left-wing-low, inverted attitude. The tachometer read 2,000 rpm. There were no signs of mechanical failure.

According to former Mooney engineering test pilot Bob Kromer, regarding crosswind landings, “I think you will find a common consensus of test-pilot opinion that most Mooneys can be operated in 90-degree crosswinds up to 15 knots with an acceptable level of pilot workload. Fifteen- to 20-knot winds can be handled, but require a much higher level of pilot proficiency and skill in crosswind landing techniques. Twenty knots or above, you should consider finding another airport to land.” Takeoffs might be slightly more forgiving, but this is a good guideline.

Angel Fire Airport is located in a basin surrounded by mountainous terrain. According to the NTSB, “Mountains to the west and northwest of the airport have peaks between 10,470 and 13,160 feet. A weather study was compiled for the accident site. An upper air sound for 1400 mountain standard time (MST) depicted an unstable vertical environment, which would allow mixing of the wind on the lee side of the terrain. Winds as high as 55 knots could occasionally reach the surface. Satellite imagery between 1300 and 1400 MST recorded a large amount of standing lenticular cloud near all of the mountainous terrain around the accident site. These clouds indicated the presence of a mountain wave environment. At 3:22 a.m. and 11:34 a.m., the National Weather Service issued wind advisories for the accident area that warned of a west-of-southwest wind between 25 and 35 miles per hour (mph) with gusts to 50 mph.”

A weather model predicted a “turbulent mountain-wave environment, with low-level wind shear, updrafts and downdrafts, downslope winds, and an environment conducive for rotors.”

There was no record of the pilot receiving a weather briefing or any other weather sources he may have used. The airport manager noted that no other flights had arrived or departed that day.

The NTSB determined that the probable cause was “the pilot’s loss of control while flying in a turbulent mountain-wave environment. Contributing to the accident was the pilot’s overconfidence in his ability to safely pilot the airplane in gusting wind conditions and his lack of experience operating in mountainous areas.”

March 3, 2013, was a Sunday. Is it possible that some compelling business or job-related pressure existed on the pilot to return home before the beginning of the workweek? If there is an urgent need to be somewhere on a schedule, flexibility is essential—or have alternative transportation options when traveling by light aircraft.

Having flown a Mooney 20E around much of the country, I have great appreciation for the aircraft’s cruise speed and fuel burn on relatively low horsepower. But it’s not a ball of fire, even at low density altitudes, when climbing fully loaded. Although the service ceiling is 19,500 feet, it will take a long time to get there. The engine was pulling about 20 inches of manifold pressure, about all the power the engine could make at a near-10,000-foot density altitude.

To see how your favorite aircraft will perform in thin air, try a takeoff (on a long runway) using only 2,000 rpm. The amount of runway required, and subsequent lackluster climb, will be eye-opening. Want more excitement? Try it at close to gross weight.

If you’re headed west, a mountain flying course somewhere along the Front Range is an excellent investment. The AOPA Air Safety Institute offers a free online course (www.airsafetyinstitute.org/mountainflying), but that is no substitute for an in-flight experience.

Exploring the envelope aft limit center of gravity is a bad idea. The manufacturer already did that and decided there might be monsters lurking. It’s almost unimaginable how squirrelly an aircraft would be under the wind conditions in this accident.

Wind can be merely uncomfortable, or disastrous.High winds in the mountains require new perspective from flatlanders who may have little appreciation for the power of updrafts, downdrafts, wave action, shear, and rotors. The winds at Angel Fire likely were well beyond anything this low-time pilot had ever experienced and quickly overpowered the Mooney, which may have been hard to control with aft CG even in benign weather.

Twenty-five-plus knots in the mountains is far nastier than similar winds in the midlands and coastal plains. Flying early or late in the day may be a much better strategy than taking off in the middle of the day. METARs from the day of the accident show that a 7 a.m. departure would have encountered winds of 120 degrees at 8 knots. At 6 p.m., winds were 200 degrees at 8 knots with a lower temperature, lower density altitude, and a far safer scenario.

As for decision making, this might be a good example of ignorance and overconfidence. The crosswind was nearly double what an experienced test pilot would tackle. At 500 hours total time, a pilot has tasted only a few of the challenges that aviation has to offer, and still is stretching his wings. Sadly, a few get broken in the seasoning process. A better strategy is to listen and learn.

The weather warnings were posted, and the airport manager clearly communicated that it was a bad day to fly. It’s said that Mother Nature is a hard teacher because she gives the test first and the lesson afterward. When the danger is clear and present, and especially when one is entrusted with the lives of others, discretion is the better part of valor.

Bruce Landsberg is the former president of the AOPA Foundation and senior safety advisor for the AOPA Air Safety Institute.

Summary
Low-time Mooney pilot tangles with big winds in New Mexico on takeoff with a full load and out of CG limits.