Get the app Get the app
Already a member? Please login below for an enhanced experience. Not a member? Join today
News & Media NASA research leverages Tecnam airframe

NASA is building an X-plane around a stock Tecnam P2006T fuselage. The Italian-built fuselage was delivered to Oceano Airport in California on July 19, Tecnam announced at EAA AirVenture. It will become the all-electric X-57 Maxwell, a significant component of NASA’s Scalable Convergent Electric Propulsion Technology and Operations Research (SCEPTOR) project—and the first manned X-plane to feature a distributed electric propulsion system. The X-57 Maxwell is designed to test and gain knowledge in the new frontier of distributed electric propulsion (DEP), Sean Clarke—a principal investigator for NASA’s Dryden Flight Research Center—said during a Tecnam briefing at AirVenture. Clarke shared the hypothesis of the project and summarized the data collected to date from ground tests of a truck-mounted wing. Baseline data already has been collected from flights by a standard Tecnam P2006T.

Clarke said a series of “Build, Fly, Learn” blocks will take the SCEPTOR project to its conclusion.

“Even though this aircraft will never be a production article, Tecnam is proud to be a part of expanding our base of knowledge in this new paradigm in flight,” said Shannon Yeager, director of sales for Tecnam U.S. “The entire aircraft manufacturing community will benefit from the return of the X-planes and the new information gained with the X-57.”

NASA is researching ideas that could lead to developing an electric propulsion-powered aircraft that would be quieter, more efficient, and environmentally friendly compared with today's commuter aircraft. The Tecnam fuselage will receive an experimental wing integrated with electric motors. 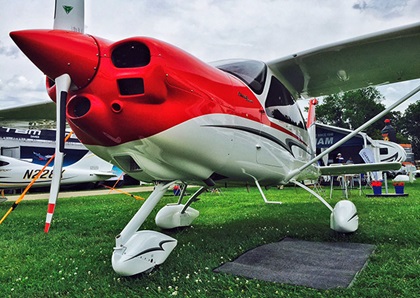 In the Leading Edge Asynchronous Propeller Technology, or Leaptech, 18 electric motors are integrated into the carbon composite wing. The ground-vehicle tests show that the distribution of power among the 18 motors creates more than double the lift at lower speeds than traditional systems. NASA researchers ultimately envision a nine-passenger aircraft with a 500-kilowatt—nearly 700-horsepower—power system in 2019.

During AirVenture, Tecnam received Transport Canada validation of the Tecnam P2010’s airworthiness certification. “We see a Canadian market that is looking for an alternative to the traditional players and costs,” said Walter DaCosta, global director of sales and marketing. “Tecnam aircraft provide that.” He said the four-seat Tecnam P2010 is now the most advanced single-engine trainer and touring aircraft in the marketplace. It features a composite fuselage, Lycoming IO-360-M1A engine, and Garmin avionics.

The P2010 joins the twin-engine P2006T under full Transport Canada certification. A new Tecnam Sales and Service Center, operated by Enrick Fournier of Composite Aviation in Quebec, will provide additional support in the Canadian market.

AOPA already reported on the July 21 first flight of the twin-engine, 11-seat Tecnam P2012 Traveller, although Tecnam representatives at AirVenture emphasized how impressed the company was with the model’s short landing distance.

In addition, Tecnam U.S. Inc. announced expanded operations, service centers, and sales in the United States. Eagle Creek Aviation Services of Indianapolis has partnered with Tecnam as a stocking dealer. Since the beginning of this year, Eagle Creek has been providing manufacturer-approved airframe maintenance training for the P2006T; it now has taken delivery of its first wave of aircraft from across Tecnam’s entire product line. Eagle Creek will be a hub for sales and service, supporting all sales agents across the United States.

Purdue Aviation of Lafayette, Indiana, will take delivery of its first P2006T during August for use in flight training and time building. After it gains operational experience, Purdue Aviation will become a Tecnam transition training provider for new deliveries. This partnership is expected to result in opportunities for internships and other educational experiences for Purdue students.

For more information about Tecnam aircraft or Tecnam U.S., visit the company's website.

Technical Editor
Mike Collins, AOPA technical editor and director of business development, died at age 59 on February 25, 2021. He was an integral part of the AOPA Media team for nearly 30 years, and held many key editorial roles at AOPA Pilot, Flight Training, and AOPA Online. He was a gifted writer, editor, photographer, audio storyteller, and videographer, and was an instrument-rated pilot and drone pilot.
Go to Mike Collins's Profile
Topics: Aircraft, Technology, EAA AirVenture