Get the app Get the app
Already a member? Please login below for an enhanced experience. Not a member? Join today
News & Videos ADSB Seeing clear benefits

With so much attention focused on the FAA’s January 1, 2020, deadline to equip with Automatic Dependent Surveillance-Broadcast (ADS-B) Out in order to continue to fly in airspace where a transponder is required today, it can be easy to lose sight of the technology’s primary benefits to general aviation pilots. 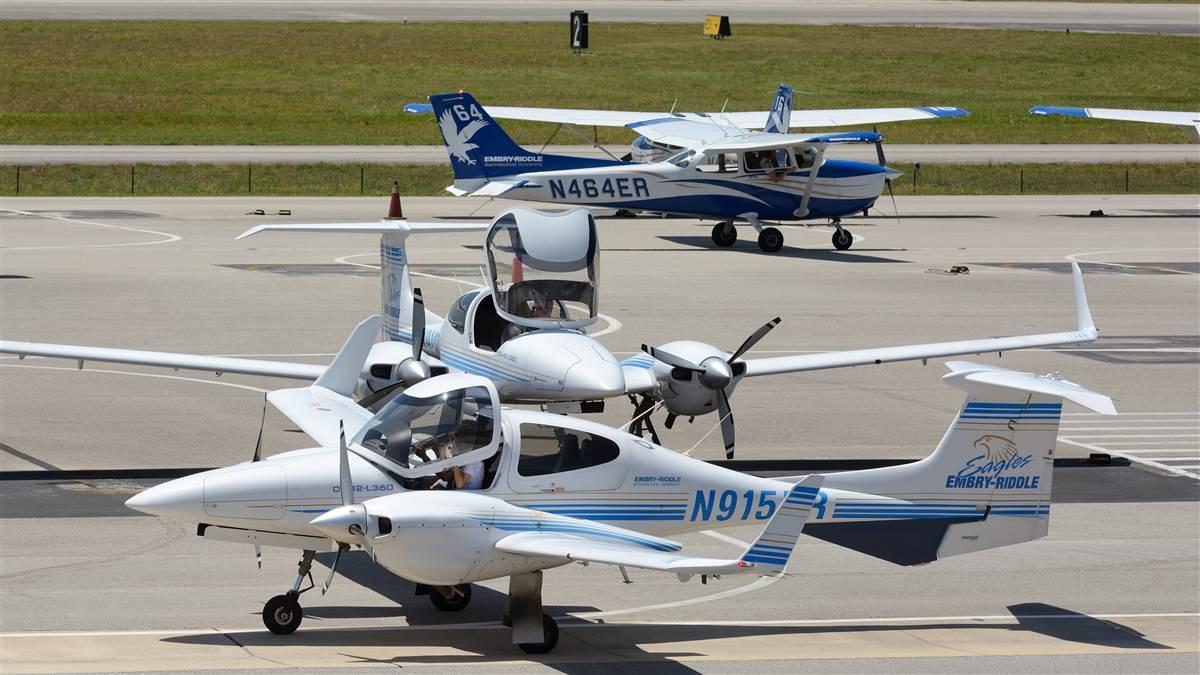 The Diamond DA42s and Cessna 172s in Embry-Riddle Aeronautical University’s Daytona Beach, Florida, fleet are equipped for both ADS-B Out and In.

ADS-B, which uses satellites instead of ground-based radar to determine aircraft location, is a key technology behind the FAA’s Next Generation Air Transportation System. For the airlines, it promises more efficient operations, especially in busy terminal airspace. But for GA aircraft owners, who frequently avoid Class B primary airports, the greatest benefits accrue from enhanced situational awareness afforded by optional ADS-B In services—specifically traffic information and subscription-free weather.

Earlier this year, an AOPA eBrief poll asked readers, “Have you ever had a close call but averted a collision because you had traffic information from ADS-B In equipment?” Nearly 3,000 readers responded to the nonscientific survey, and 456—about 15 percent—replied in the affirmative. Many of these early ADS-B adopters—as of June 1, 23,507 U.S. GA aircraft have equipped—are enthusiastic about ADS-B traffic.

Dana Miller lives in Northern California and has ADS-B Out and In installed in his Bonanza V35B. He commutes between San Jose and Stockton several times each week. “It’s a 15-minute flight and I can have 50 airplanes on the screen,” he said. “It’s nice to see stuff that [controllers] are not even calling out.

“While flying from Reno/Stead [Nevada] Airport to San Jose [California] International, I was climbing from 10,500 to 14,500 feet to go over smoke from a forest fire in the American River Canyon that had been burning for days. At 12,000 feet a target was at 12 o’clock on the opposite heading, six miles out and closing very fast. I banked to the left and about 30 seconds later an L–39 jet came through the smoke at the same altitude as me and banking to his left,” Miller said. “I was about 10 minutes from being able to pick up Oakland Center for flight following, so without ADS-B, this could have ended much differently. Instead, we missed each other by about a half a mile.”

That event sold Miller on ADS-B’s benefits. “I’m not convinced he saw me until I turned out,” he said. Miller said he would be uncomfortable flying without the technology.

“I’m an absolute fan of the ADS-B,” he added. “From my perspective it’s much more important that people have ADS-B than a physical—especially in congested airspace like the Bay Area.”

Miller is a fan of ADS-B weather, as well, noting that he can receive METARs much farther away from an airport that the AWOS broadcast can reach—especially when terrain is involved.

“Flying eastbound over New Haven, Connecticut, at 2,600 feet on a hazy day, my ADS-B gave me a voice warning of traffic at 12 o’clock, same altitude, a mile away,” said David Faile of Fairfield, Connecticut. “The voice feature piped directly into my headset meant that I did not need to look at a screen to determine traffic location. Not seeing the traffic, I started a right turn, and the ADS-B advised me that the traffic was now at 11:30.” Faile quickly spotted the opposing traffic—a Cessna Conquest—and estimated the rate of closure with his own Van’s RV–6 at more than 300 knots.

“I’m looking forward to when we get ADS-B [Out] in all the aircraft we fly,” said Mike Mower of Indian Trail, North Carolina, who has been flying with a portable ADS-B receiver. “I recognize the limitations there. I’ve definitely seen aircraft that I may not have seen before.”

ADS-B can deliver traffic information to the cockpit, but in order to receive the full traffic picture, an aircraft must be equipped with ADS-B Out—the ADS-B Out position report triggers ground stations to send information on traffic within a hockey-puck-shaped cylinder extending 15 miles around the aircraft, and 3,500 feet above and below. (In many cases, information from ADS-B Out-equipped aircraft is received directly, and the incomplete traffic picture can be confusing.) AOPA has lobbied the FAA to open up the ground stations so traffic is sent to all aircraft and the FAA has agreed; its contractor is evaluating feasibility, cost, and timing of such a move.

Even with ADS-B Out and In, “I can’t stress enough the need to keep your eyes outside the airplane,” Mower said. On a flight from Dahlonega, Georgia, to Lancaster, South Carolina—despite receiving VFR traffic advisories from Atlanta Approach—a Beech Baron passed directly in front of him, within a quarter mile and only 200 feet higher. The high wing of his Helio Courier blocked the twin from his view until it was very close.

Mower is especially concerned that pilots will spend too much time looking for traffic on a tablet computer or cockpit display, instead of scanning the sky. Aircraft without transponders, such as Cubs and gliders, will not appear on a cockpit display. “Recognize the limitations of the technology and fall back on see and avoid,” he said.

A large fleet operator that equipped with ADS-B Out and In some 13 years ago remains enthusiastic about the technology. “ADS-B greatly enhances safety,” said Ken Byrnes, chairman of the flight training department and an associate professor of aeronautical science at Embry-Riddle Aeronautical University in Daytona Beach, Florida. “ADS-B In is going to greatly increase your situational awareness and enhance your personal safety.”

University aircraft were involved in fatal accidents in 1995 and 1998. “We did a risk assessment, and decided we had to fix that,” said Byrnes, noting that there is a lot of flight training activity in the area—and that it’s sandwiched between the Orlando International airspace complex to the southwest, restricted airspace to the west, and the Atlantic Ocean to the east.

The university looked at ADS-B and available traffic alert and collision avoidance systems (TCAS), and decided to install first-generation ADS-B hardware. (That hardware does not meet the requirements of the FAA’s 2020 mandate, and the Daytona Beach campus is upgrading the fleet to compliant equipment.) The university also improved communications with air traffic control, local airports, and other large flight schools.

Today, operational ADS-B is required for Embry Riddle to dispatch a flight. “For us, it’s a safety-critical item, and it has been since 2003. And I have plenty of examples showing where it has saved lives,” Byrnes said.

The return on the ADS-B investment has been immeasurable, Byrnes added. In addition to improved pilot situational awareness, the technology helps with flight planning, operations management, and the investigation of in-flight issues. The Daytona Beach campus’s 65 aircraft log 75,000 flight hours per year; the Prescott, Arizona, campus operates another 28 ADS-B-equipped aircraft.

“We get these time and time again,” he said. “We’re making evasive maneuvers out in the practice areas. We’re not waiting for ATC [to give us a traffic callout]; we’re deviating in heading and altitude based on what we’re seeing on the ADS-B screen—and it’s saved us.”

Mammen also looks at the teaching potential of an event. He’ll make a movie of the aircraft tracks, and overlay ATC audio. “It’s a huge resource for us.”

“When you’re out there in the practice area with three or four other aircraft, all doing the same thing, it bumps up situational awareness a lot,” said Rene Heins, a line instructor pilot for the university. “The new ones even tell you altitude.” 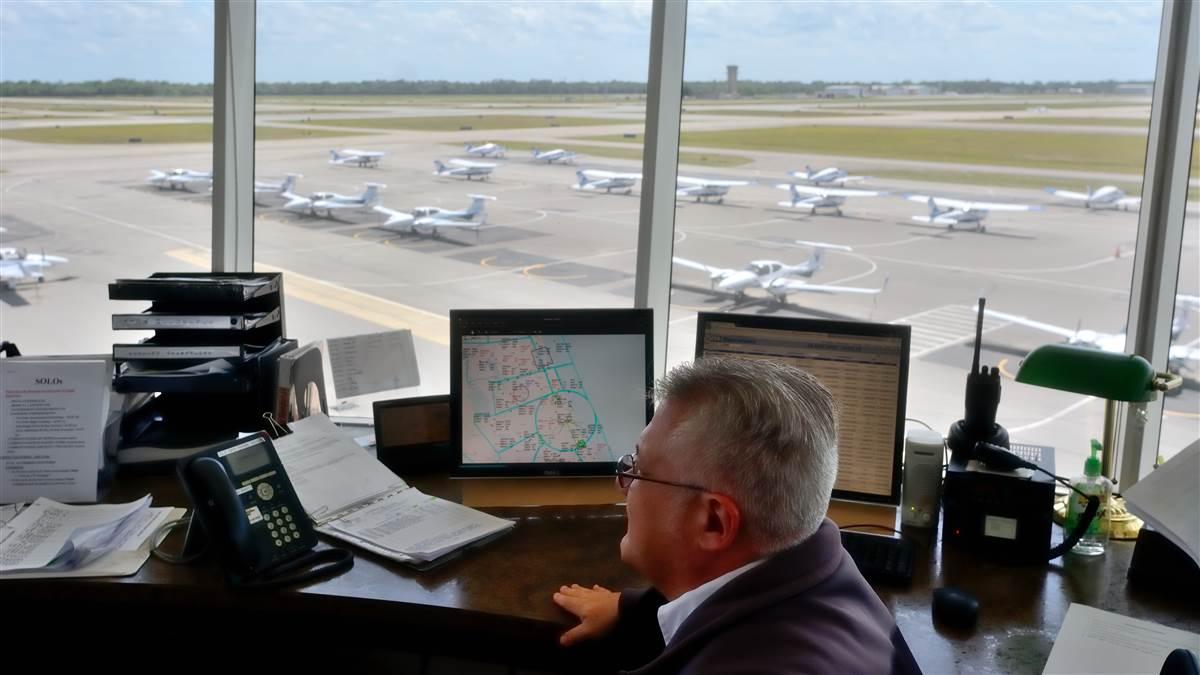 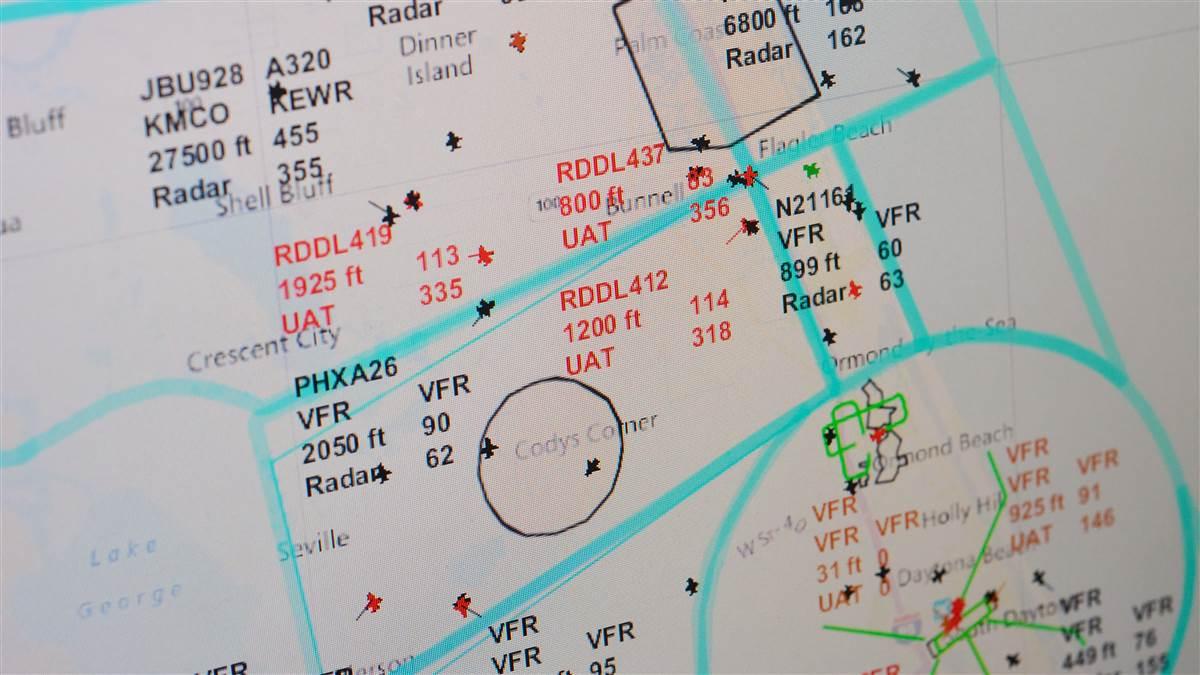 It’s accessible to flight operations staff, and in the Flight Operations Center where students plan flights.