Get the app Get the app
Already a member? Please login below for an enhanced experience. Not a member? Join today
News & Media Mentor matters

Ready for an alphabet soup?

RNAV GPS approaches long ago passed from oddity to everyday. More than a thousand U.S. airports without an instrument landing system (ILS) currently are served by RNAV GPS approaches that offer equivalent accuracy and approach minimums. When it comes to wrapping the mind around the myriad sets of minimums associated with RNAV GPS approaches, however, even experienced pilots sometimes struggle. LNAV, LP, LNAV/VNAV, and LPV, oh my! Let’s dive in. 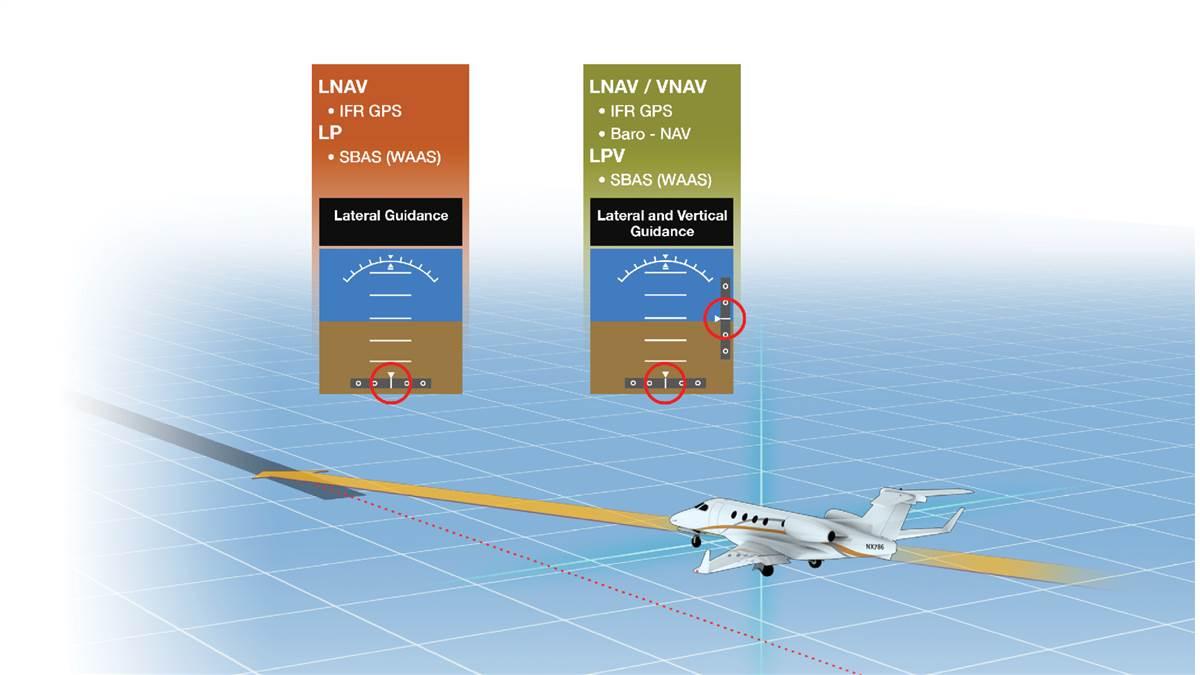 Most familiar and accessible is the lateral navigation (LNAV) set of minimums. Requiring only an approved IFR GPS, or such an input into a flight management system (FMS), pilots have been flying these purely nonprecision approaches for more than two decades.

A newer level of GPS nonprecision approach minimums has been available for about five years: localizer performance (LP). Flying an RNAV approach to LNAV minimums requires only a basic IFR GPS input, but in order to utilize LP minimums the GPS receiver must have spaced-based augmentation system (SBAS) capability. In the United States, of course, that means a Wide Area Augmentation System (WAAS)-capable GPS, but it’s important to note that WAAS is only one form of SBAS. In Europe, for example, RNAV approaches have been utilizing SBAS via the European geostationary navigation overlay service (EGNOS) for half a decade. The greater lateral accuracy of SBAS allows LP minimums potentially to be hundreds of feet lower than LNAV minimums to the same runway; these minimums will be published when, for reasons of terrain or obstacles, LNAV/VNAV or LPV minimums are not possible.

While these next two levels of RNAV minimums are not technically precision approaches (they do not meet international standards to be called such), they can be considered “precision-like.” The familiar localizer performance with vertical guidance (LPV) approaches are in almost no material way different from an ILS, except that the guidance is notably more consistent and smooth with LPV approaches. LPV minimums can be published as low as 200 feet above the runway, and even can be counted as a precision approach during an instrument proficiency check or checkride requiring the demonstration of a precision approach.

So why publish LNAV/VNAV minimums at all? Unlike LPV minimums, to fly an approach to LNAV/VNAV minimums does not require that an aircraft have an SBAS system. Rather, a plain-vanilla IFR GPS receiver can be combined with vertical navigation provided by barometric altitude inputs to an FMS to allow for LNAV/VNAV capability. It’s worth keeping in mind that while WAAS capability is taken for granted in new glass-cockpit piston trainers, there are many turbine aircraft flying that were built before WAAS became available. The cost of upgrading these aircraft to WAAS capability can be quite high, and many operators deem LNAV/VNAV “good enough” for RNAV approaches. Further, should WAAS become unavailable, or should an aircraft be flying outside the coverage area of an SBAS system, LNAV/VNAV provides a “fail-down” level of approach capability better than reversion to LNAV-only minimums.

As if keeping four types of minimums straight isn’t challenging enough, most modern FMSs can provide advisory-only vertical guidance during a nonprecision LNAV or LP approach. Garmin navigators will annunciate this capability as “LNAV+V” or “LP+V” (don’t confuse this with LPV!). While this capability provides a tremendous aid to maintaining a stabilized final approach, it’s important to note that it does not change the pilot’s responsibility to observe any minimum altitudes on the approach—nor does it lower the minimum descent altitude (MDA) as published.

Putting all these potential types of minimums into a hat, there’s a critical question pilots need to keep in mind when conducting an RNAV approach: “To which minimums am I descending?” The answer is the highest of the following: the best minimums published on the approach, the best minimums for which the aircraft is certified, and the level of service that the navigator indicates is available right now. While the first criterion is straightforward, the last two present subtleties easily overlooked.

LP minimums present an example of where the airplane may limit what minimums can be used. Many WAAS-capable integrated flight decks were developed before LP approaches become common. Until upgraded with new software, the avionics simply don’t support the execution of an LP approach, and the pilot may not use LP minimums. For example, depending on how recently the manufacturer has released a software upgrade, some light jets with Garmin G1000-based systems can do approaches to LP minimums, while others cannot. The pilot must consult the aircraft’s official documentation to know for sure.

Finally, the question of what level of service is supported is incredibly important, yet easily missed. Even if an aircraft is equipped with multiple SBAS receiver capabilities and the latest software allowing for all RNAV minimums, at any particular moment and location, reception of GPS and SBAS signals can’t be guaranteed. Depending on the manufacturer of the flight deck, the level of service being received will be displayed either directly on or adjacent to the HSI depiction on the primary flight display (PFD).

If a pilot is flying an RNAV approach to LPV minimums, he or she must see LPV annunciated on the PFD. Should LPV precision and integrity not be available, the flight deck will not annunciate LPV, and will present an advisory message to the pilot. In the heat of a low approach, however, such messages can easily be missed, so a procedure to proactively confirm service level should be developed and used.

Author Neil Singer is a Master CFI with more than 8,500 hours in 15 years of flying.
Illustration by Charles Floyd