An obscure aviation book with a century-old inscription connects a pioneer aviator to his son. 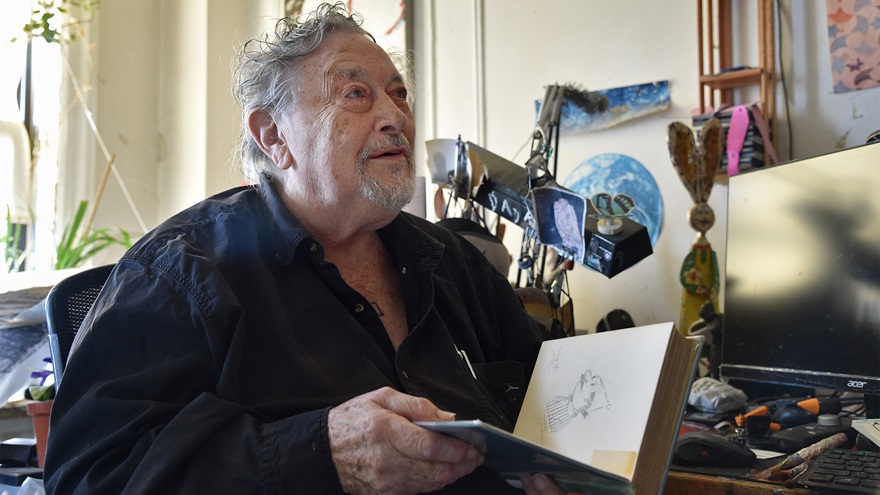 Aviation pioneer Knox Martin, who established air routes in South America during the 1910s and 1920s, had doodled in a long lost book that was delivered to his son, artist Knox Martin, who opened the book in his New York City apartment Dec. 4. Photo by David Tulis.

The old book in the AOPA aviation library hadn’t been opened in decades and was about to be discarded when a sharp-eyed staffer noticed something unusual about it.

Several sketches were inscribed in pencil on the inside covers of Monoplanes and Biplanes, a 331-page tome published in 1911 at the manic dawn of the aviation industry. The artist, and presumed then-owner of the book, had signed his name, too: Knox Martin.

“I got curious about who Knox Martin was, so I Googled him,” said Toni Mensching, a former AOPA staffer. “It turns out he was a pioneer aviator who had lived a fascinating life.”

William Knox Martin, born in rural Virginia in 1891, began flying in his teens, explored Venezuela by air in a Curtiss biplane, was a Boeing test pilot, flew for the U.S. Marines in Europe in World War I, and brought a surplus “Jenny” to Colombia where, in 1919, he became the first person to fly across the Andes. “El Intrepido Aviator Americano” as he was known, barnstormed figure eights around the twin spires of the cathedral at Barranquilla, started air mail service there, and married South American beauty Isabella Vieco.

The Martins had three children, and he put high-risk flying aside for an art career in the mid-1920s and moved to Virginia. He died in 1927 when the car he was riding in crashed in Watertown, New York.

Mensching wondered whether Martin had any living relatives, and it didn’t take her long to find one. The same computer screen that showed Martin’s Wikipedia page also listed another Knox Martin— this one a renowned New York artist and professor who happened to be born in Barranquilla, Colombia, in 1923. The artist, now 92, had served in the U.S. Army as a glider pilot during World War II, and he still teaches master’s degree courses at The Art Students League in Manhattan.

Mensching contacted Martin by phone, confirmed he was the son of the pioneer aviator, and arranged for AOPA to give him the book with his father’s 104-year-old doodles. Martin was just three years old when his father died but has distinct memories of him. They even flew together when he was a toddler, and a model Jenny hangs from the ceiling of the artist’s studio in Washington Heights.

“He used to take me flying against the protestations of the whole family,” he said. “He bundled me up in warm clothes and fixed me to his chest.” 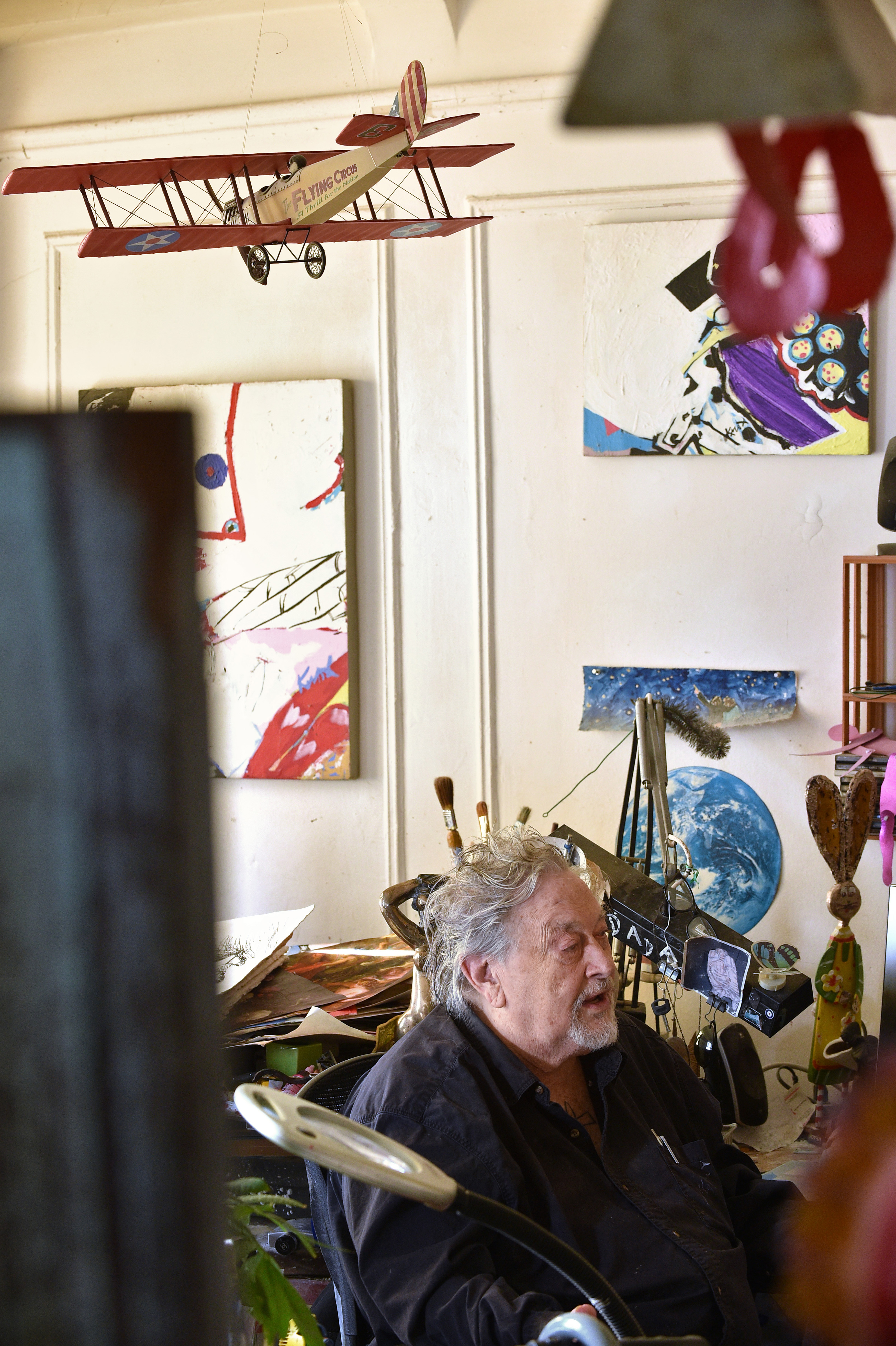 Examining the drawings his father made at age 21, Martin said his dad’s playful personality and focus are clear.

“The details of the airplane are so life-like,” he said. “I’ve seen some of my dad’s composition books, and he filled them with drawings of hawks. He studied every detail of the way they flew, the way they turned, the angle of their wings and tail.”

Martin said his dad left a treasure trove of drawings, paintings, notes, maps, stamps, and other early aviation artifacts, but they were sold or discarded long ago by an aunt who didn’t appreciate them.

Martin’s cluttered eighth-floor home/office is jammed with paintings, sculptures, books, and works in progress, as well as brushes, clay, and canvases and other tools of his trade. Several cats also reside there, as well as a caged parrot that meows like they do and repeats random words and phrases. Martin leans heavily on a cane or walker in rooms so full of art objects that they’re difficult to navigate.

The library book, written by Grover Cleveland Loening, cataloged the nascent aviation industry as it underwent a massive growth spurt in Europe and the United States.

Loening, an engineer, cataloged the state of the aviation art by comparing the growing variety.

“The successful aeroplanes which have been evolved, although similar in their fundamental characteristics, have begun to vary from each other in many important details of size, arrangement, and efficiency of parts,” he wrote. “The number of monoplanes flying is far greater than the number of biplanes...This is very likely due to their greater cheapness and the simplicity of structure and the higher speed generally attainable.”

Some aviation terms have changed since then: Spread is span; direction rudder is rudder; elevation rudder is elevator; transverse control is ailerons; and mounting is landing gear. Weight, speed, power loading, and aspect ratio are unchanged.

The author was a Wright fan.

“Probably the most interesting aeroplane that has been brought out during 1910 is the small Wright ‘roadster,’ with its miniature biplane cell, and its huge propellers spanning almost the entire machine... A machine of this type, but fitted with a 60-horse-power, 8-cylinder motor and very much smaller in size, was to be driven in the 1910 Gordon-Bennett Race... and there is little doubt, with the phenomenal speed it had already displayed, that it would have won this race had the unfortunate failure of the engine not occurred.

“The speed of the 'racer' has been timed by this author at 67.5 miles an hour, and that of the 'roadster' at 54.5 miles an hour. Wilbur Wright has stated that even higher speed has been attained.”

The book shows how much was unknown about airplanes and human physiology.

Loening was sure rapid descents were the cause of post-flight dizziness and nausea, and “men with weak hearts should never fly above 1,000 feet.” He postulated that midair collisions “are rarely fatal, although the machines may be totally wrecked.”

He also focused on technique, suggesting that pilots consider leaving their engines on during landing for “tangential landings” that don’t destroy the “chassis” or lead to the “complete smashing of the aeroplane.”

Other parts could have been written today. Loening believed aviation had the potential to be “safer than automobiling,” and he was critical of showoff pilots and sensational news accounts.

“The many recent tragedies in aviation are so graphically portrayed and so absorbingly dwelt upon by the press and the public in general that the realization of the negligence on the part of the very aviators who are killed is often obscured,” he wrote. “The hasty judgment of the all too credulous world is passed, that it is the aeroplane itself that is fundamentally dangerous.

“Most of the accidents in aviation, therefore, are avoidable if flying in spirals and steep volplanes (dives) for the purpose of thrilling the public is stopped, and if aviators acquire and use better judgment in interpreting the conditions of the weather.”

Martin said he understands the appeal that flying in that period held for his father.

“Aviation was so new and so exciting,” he said. “The pace of advancement was extraordinary—and it was happening everywhere. There were worlds to conquer, and he was part of that." 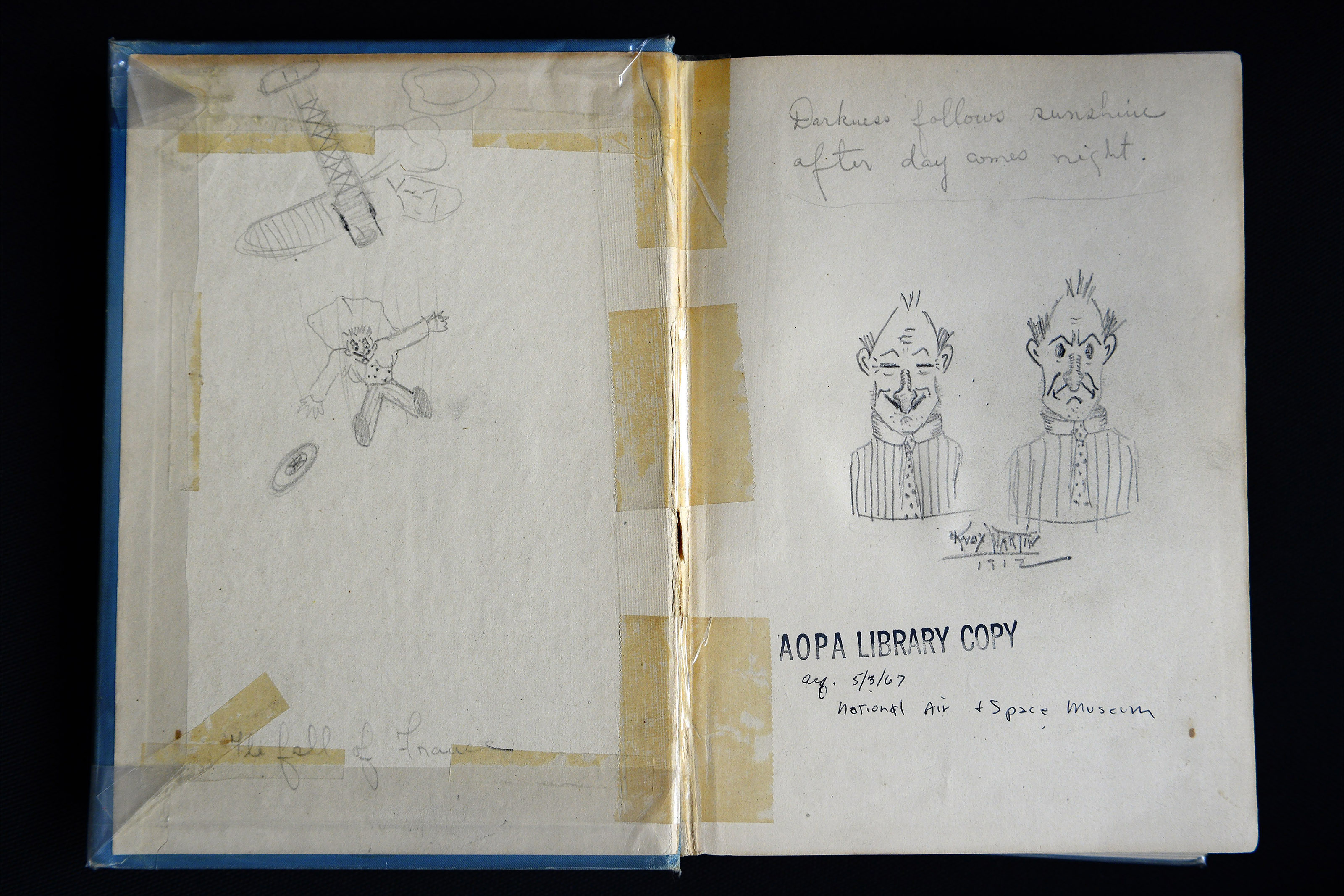