Get the app Get the app
AOPA Members DO more LEARN more SAVE more - Get MORE out of being a pilot - CLICK HERE
News & Media Career Pilot: Checklists and discipline

Checklists: For professional pilots they are a necessary evil, nuisance, you name it. But they work and are key to why airline travel is the safest form of travel. 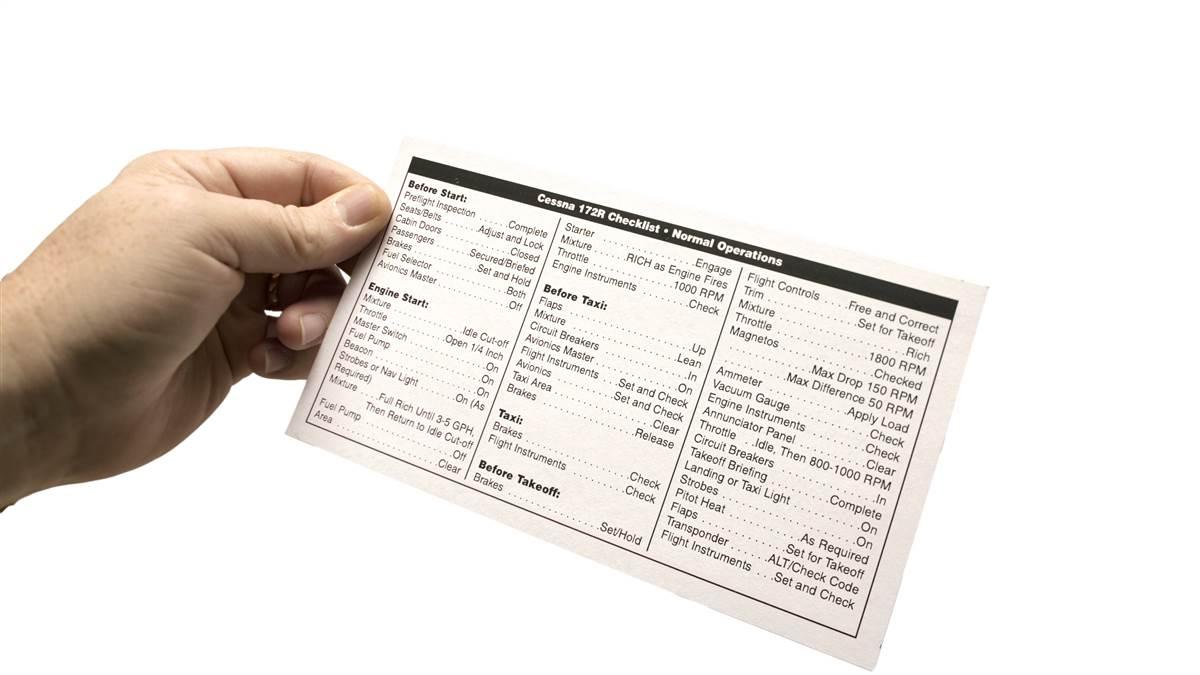 Flows are used at nearly every professional flight department these days and are employed from preflight cockpit setup to shut down. Flows typically work in a logical direction, say from left to right and/or up and down in the cockpit. A preflight flow, for example, typically involves checking nearly every switch and system as well as circuit breakers and emergency equipment. Subsequent flows are typically shorter but nearly always follow a logical order.

Many primary students have been introduced to CIGAR, the mnemonic device to check controls, instruments, gas, altimeter, radios (or any of a number of variations) as a flow to prepare an airplane for takeoff. My instructor had his own version that more than 30 years later is still burned into my brain, and I use it when I fly my family’s airplanes to this day. Use whatever works for you and stick with it. After running through CIGAR or its variation, pull out the checklist to verify that everything was done.

As we all know, flying has opportunities aplenty for distraction from inside or outside the cockpit. These often lead to overlooked items at a critical portion of a flight. As a painful and expensive example, distraction has caused countless gear-up landings. No human is perfect, but using the flow/checklist method is guaranteed to trap more errors than using just one of each.

There is also a discipline in using checklists. Interruptions are the most common form of checklist failure. Some techniques to use to be sure the list gets continued to completion is to remember your place or keep your finger on the item where you stopped. Can’t remember where you left off? Just start over if in any doubt. Professionals also use various techniques to be sure they don’t forget to do a checklist. Typically, they leave the checklist in a prominent place (i.e., in front of a screen or throttle lever) so as not to be forgotten. Others may not snap into their shoulder harness for landing until the landing checklist is completed. There are countless ways to cover your rear, and different cockpits will require different disciplines.

Our enemies of aviation perfection known as hurrying, complacency, and laziness like to get involved in ruining any given flight. Perhaps you don’t pull out the checklist physically but do it from memory. After all, you’ve done it so many times it’s burned into your brain, right? Yep, until that one time your co-pilot gives you that quizzical look as you start rattling off the beginning of the before-takeoff check as you’re on short final. I got that T-shirt once. Both checklists started with the same item and my brain rolled right into the wrong checklist. I downed a plate full of humble stew on that one. Lesson learned. Don’t be lazy—pull out the list and read it.