Col. Charles E. McGee spoke to about 100 attendees at AOPA’s National Aviation Community Center in Frederick, Maryland, Feb. 13, sharing what he called the “Tuskegee Experience” as part of a Black History Month event. The event included a question-and-answer session with McGee and a showing of the film Tuskegee Airmen.

McGee, 96, graduated from flight school at Tuskegee Army Airfield in 1943 and served in World War II, the Korean War, and the Vietnam War during his 30-year military career, flying a total of 409 combat missions. During World War II, he flew P-39 Airacobras, P-47 Thunderbolts, and P-51 Mustangs in Italy with the 332nd fighter group known as the Red Tails. McGee returned to the United States at the end of 1944 and became a B-25 Mitchell bomber instructor at Tuskegee Army Airfield until 1946 when the field closed at the end of the war.

The Tuskegee Airmen are often thought of as the 900 pilots who trained at the base in Tuskegee, Alabama, between 1941 and 1946. However, McGee pointed out, because of segregation, the Tuskegee squadrons needed to have all of their own support personnel, totaling up to 14,000.

McGee said some called the end of World War II “Double V-Day” for the defeat of Nazi Germany and of racism in America. After that, the all-black Tuskegee Army Airfield was closed and the enlisted men were “scattered around the world.” For the first time, black and white men served on the same bases, but they still had separate buildings. McGee was assigned to Lockbourne Air Base in Ohio.

Change came slowly, McGee said, but the Air Force eventually decided that it needed to use people based on training and experience, not the color of their skin.

McGee flew the P-51 Mustang during the Korean War and later the F-80 jet fighter and F-89 Scorpions. He flew RF-4C Phantoms in the Vietnam War, according to the National Aviation Hall of Fame. 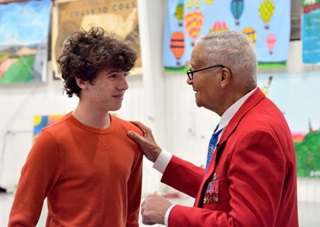 During his career, McGee had commanded air bases overseas, but it wasn’t until 1972 that he commanded the 1840th Air Base Wing at Richards-Gebaur in Missouri, becoming the first black officer to command a base in the United States, he said. He retired from the Air Force in 1973.

“What’s important is the value lessons learned,” McGee told the audience, explaining that the values he lived by and lessons he learned as a Tuskegee Airman, what he calls the “four Ps”—perceive, prepare, perform, and persevere—are important for America’s youth today.

McGee encouraged the youth in attendance to perceive, or dream their dreams and find their talents; prepare for those dreams by getting a good education; perform to a standard of excellence in everything; and persevere in the face of adversity. McGee noted that the Tuskegee Airmen didn’t let the pressures of racism and segregation prevent them from serving their country.

“Don’t let circumstances keep you from achieving [your dreams],” he said. 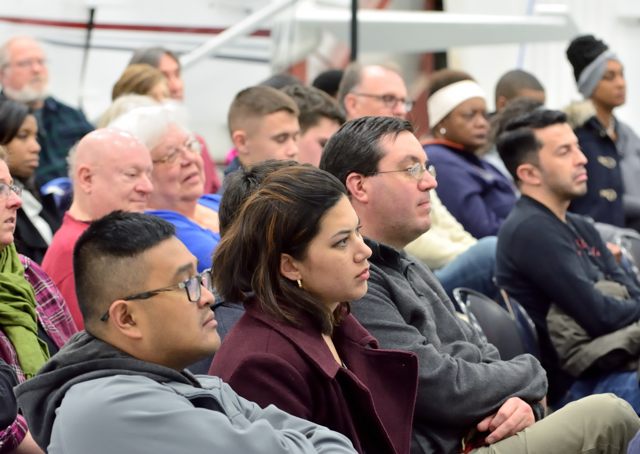