Get the app Get the app
Get the latest news on coronavirus impacts on general aviation, including what AOPA is doing to protect GA, event cancellations, advice for pilots to protect themselves, and more. Read More
Already a member? Please login below for an enhanced experience. Not a member? Join today
News & Media P&E: ADS-B 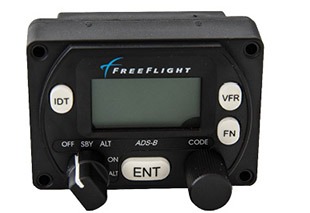 Once you’re equipped, there isn’t much to do

As a pilot climbing into an ADS-B Out-equipped airplane for the first time, what do you have to do differently in order to transmit the data required by the FAA’s January 1, 2020, mandate for ADS-B Out in airspace where a transponder is required today? Nothing, really.

Transmission of ADS-B Out information in a properly equipped aircraft essentially should be automatic.

The FAA’s rules for Automatic Dependent Surveillance-Broadcast Out require a single point of entry for the transponder code. For 1090ES, it’s easy—a Mode S transponder into which you’ve already entered any assigned squawk code (or the 1200 code for VFR) also broadcasts the ADS-B data. For 978UAT the process may differ based on the hardware manufacturer, but the outcome will be the same. Let’s see how some 978UAT manufacturers handle this.

The serial connection to a digital Garmin transponder—or AutoSquawk technology with a legacy transponder—eliminates the need and cost to purchase and install a dedicated UAT control panel for the GDL 84/88, Stone explained.

FreeFlight Systems uses a similar approach for its UATs. For aircraft with a modern digital transponder, an RS-232 serial cable allows a direct connect interface, said Pete Ring, director of sales and marketing. “With this configuration, you will be required to install a status light in the panel for the ADS-B Status indicator.” Aircraft equipped with legacy transponders, such as the Bendix/King KT 76, use what’s commonly referred to as “sniffer technology,” he added.

“When you install our 978 system, the coax for the ADS-B antenna is run in parallel to the coax for the existing transponder. Our system can then pull the transponder’s squawk code directly off the signal coming through the line,” Ring said. Such an installation typically includes the company’s TC978 control head, which also acts as the status indicator—eliminating the need for a status light.

FreeFlight’s control head (shown above) has controls and a display that look very similar to a transponder’s. It allows the pilot to control ADS-B Out independently of the transponder, and provides other capabilities, as well. “Our control head acts as the configuration panel for the setup of the system. In the event you are completing an install without the control head, you would need to configure the system via an interface cable that we can provide, and a laptop.”

What information is ADS-B Out providing, anyway? The normal data set includes GPS position, altitude, position integrity, heading, groundspeed, velocity integrity, and whether the aircraft is in the air or on the ground—in addition to identifying information (transponder squawk code; the flight ID, typically your N number; and the aircraft’s ICAO registration number).

If your ADS-B Out solution uses 1090ES, your identifying information is always being transmitted. AOPA supports the National Business Aviation Association’s efforts to preserve privacy, an issue that’s also being addressed by the FAA’s Equip 2020 working group. Aircraft owners opting for 978UAT, however, have a little flexibility: Most universal access transceivers offer what’s called Anonymous Mode.

FAR 91.227 specifically allows operators with TSO-C154c-compliant 978UAT ADS-B Out equipment to temporarily transmit a self-assigned (randomized) 24-bit address, and no call sign. This option is not available for aircraft with 1090ES ADS-B Out equipment. Beginning January 1, 2020, the UAT anonymous 24-bit address feature may only be used in ADS-B-mandated airspace when the pilot has not filed a flight plan and is not requesting ATC services. The ADS-B call sign—for general aviation pilots, typically the aircraft’s N number—may be omitted only when using the anonymous 24-bit address.

In the air or on the ground?

For retractable-gear aircraft, air/ground determination is easy. The ADS-B Out system is connected to the squat switch, usually mounted on a landing-gear shock strut. It opens when the aircraft is airborne, because there’s no weight on the wheels. The same circuit prevents the landing gear from being retracted when the airplane is still on the ground, and may also help control aircraft pressurization.

Avionics manufacturers use a variety of methods to determine air/ground status for fixed-gear aircraft.

FreeFlight Systems’ 978UATs use aircraft groundspeed. “If no squat switch is available, then the GPS groundspeed is set to a specific value appropriate for the aircraft—such as 30 knots in a Cessna 172,” Ring explained. “When the aircraft exceeds that speed, the RANGR will switch to air mode.”

ADS-B: Where are we?

General aviation appears to be winning the race to ADS-B Out equipage. According to FAA data compiled by its ADS-B Out compliance monitor, 17,668 aircraft had equipped as of December 1, 2015—an increase of 812 from November 1 numbers.

Why the difference in datalink numbers? A couple of possibilities:

Aircraft required to equip with 1090ES (flying above FL180, for example) will be affected most by the rule, and their owners may be more motivated to equip early.

Depending on equipment installed in the aircraft, the 1090ES path to ADS-B Out can be relatively simple—in some cases, just updating a Garmin GTX 330 transponder to 330ES and connecting it to an existing navigator.

More certified 978UAT ADS-B Out solutions are available now than in 2014, and this ratio is likely to change as we move toward January 1, 2020—and beyond.—MPC