Get the app Get the app
AOPA Members DO more LEARN more SAVE more - Get MORE out of being a pilot - CLICK HERE
News & Media Pilots: Legendary Drummer 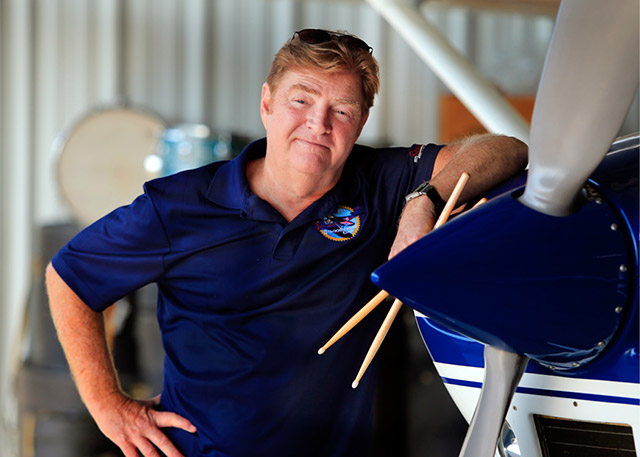 It’s no fun to play “Name that Song” with drummer Paul Leim—since 1965 he’s played nearly every hit. He knows the lyrics, knows the singers, knows the music. He is one of the most recorded drummers in the world. Discovered at age 15 in a little town in Texas—he was told, “You’ve got a metronome in your head”—Leim was in Hollywood performing with the stars before he was 25 years old. And while he loves music, he might love flying almost as much.

“I soloed the day we did Doc Severinsen’s album,” he says. He earned his certificate in 10 weeks, he recalls. Leim’s father had an Aeronca Chief on their farm in Troup, Texas. “Dad introduced me to flying. We had a runway on the farm. Flying is in my blood,” he says.

Leim’s music credits read like a who’s who of the recording business. He started playing for Tom Jones in 1977 and has played with Lionel Richie, Peter Cetera, Shania Twain, Faith Hill, Kenny Chesney, Amy Grant, Eddie Rabbitt, Neil Diamond—the list goes on. He also has played for movies and television: Star Wars: The Return of the Jedi, Dirty Dancing, Terms of Endearment, Knight Rider, Wonder Woman—again, the list goes on.

“I have achieved everything I could have envisioned as a kid,” he says. Married to his high school sweetheart, Jeanie (“I met her in the first grade”), the couple lived in Los Angeles for most of his career. They “retired”—if that word could ever be used to describe the energetic Leim—to Nashville several years ago. “I am the last of an era of studio guys,” he says. “I love making records.”

Certificates | Private; working on instrument rating. “I have started it three times and work always got in the way.”

Favorite aircraft | “My first airplane was a 1966 Skyhawk I bought in 1975. I have had nine airplanes, and I’ve loved them all—especially my 182 Skylane.”

Extra | “Tom Jones is my favorite singer, Neil Diamond is the best band leader in the history of the music business, and I always wanted to work with Elvis—but missed doing so by two weeks.”