Get the app Get the app
News & Media Turbine Pilot: Quick Look 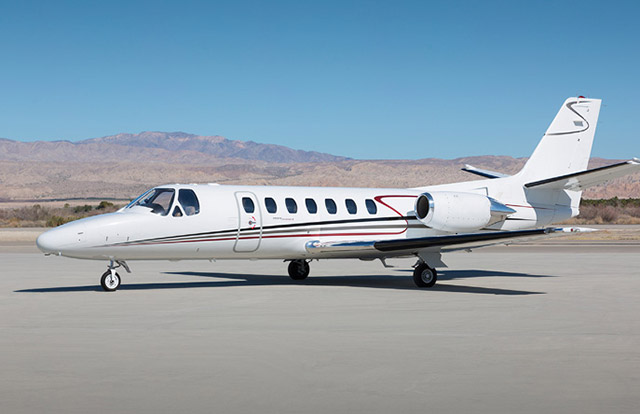 Cessna’s Citation V (Model 560) takes the wildly popular Citation II (C550) and adds to that design many new creature comforts and performance enhancements sought by owners of the original II. Introduced for the 1989 model year, the V is 20 inches longer than the II or S/II and is distinguished by having seven cabin windows per side, versus the II’s six windows. Less noticeable is the V’s larger-span horizontal stabilizer and elevators, which provide a little extra pitch authority to counter the longer fuselage.

Despite the added length, Cessna didn’t try to cram in more seats, since the II’s eight-seat configuration was widely praised by owners. Instead, the V utilized the added length to make the cabin more comfortable by adding space between seat rows. Add to that some updated cabinetry and creature comforts, and the V drew praise for its cabin appointments compared to its predecessor.

Up front, Citation pilots of the day were welcomed to the world of glass with a standard two-tube electronic flight instrument system setup on the captain’s side. A five-tube setup was optional and provided co-pilot glass and a center multifunction display. Honeywell’s SPZ-500 flight director/autopilot is supplemented by a Honeywell (formerly Global Wolfsberg) GNS-X flight management system. Collins Proline II boxes supply the com/nav signals. Like all 500-series Citations, the cockpit has expansive windows providing excellent visibility in nearly every direction. The V is also capable of being flown by a single pilot.

Pratt & Whitney JT15D-5As power the V and provide 2,900 pounds static thrust each, versus the 2,500 pounds static thrust of the C550. The added thrust provides better takeoff and climb performance, a solid 400-knot cruise, and a 45,000-foot ceiling. Thrust reversers are standard. Unlike more modern designs, the engines are not FADEC controlled, which adds to pilot workload.

A carry-over from the original Citation II is the use of pneumatic deice boots rather than bleed-air heated leading edges. The Citation S/II used a weeping-wing fluid deice system that was effective but heavy and prone to leaks. With the V, Cessna went back to the rubber leading edges everywhere except for the inboard section of the wings, where bleed-air is used to heat the inboard wing section to avoid ice ingestion into the engines.

Like all straight-wing Citations, the C560 possesses excellent runway performance compared to other jets in its class. Naturally, however, overall speed is the compromise that has to be weighed against the swept-wing competitors. Turboprops offer even better runway performance than the C560, but the majority will fall short in speed, save for the Piaggio Avanti and Cheyenne 400LS as rare examples. But the turboprops will burn just a fraction of the 1,000 pounds per hour of Jet A that the C560 burns at high-speed cruise. Overall, the Citation V will please its owners with impressive runway and load-hauling capability, as well as a nicely appointed cabin and a solid 400 KTAS cruise.