Amidst unprecedented new lows in the annual general aviation accident toll, the NTSB continued its call Jan. 13 for more effort to prevent loss of control by GA pilots. Releasing the 2016 edition of the agency’s Most Wanted list of safety improvements, NTSB Chairman Christopher Hart emphasized the losses rather than gains in light aviation safety, and compared personal aviation unfavorably to other types of general aviation, including business travel.

Hart, speaking to AOPA Live after the event, said the agency differentiates between personal flights made for business, or strictly personal. The combined total, Hart said, has remained nearly unchanged. 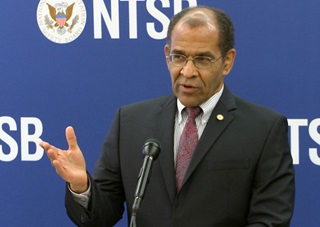 “We’re concerned that that number is as high as it is,” Hart said. “It.’s been that way for far too long.”

AOPA, and particularly the AOPA Air Safety Institute, has long been working to improve safety and joined the NTSB in appealing for increased use of angle of attack indicators, among other measures. The high cost of certifying and bringing these systems to market had been a significant barrier that eased in 2014. The General Aviation Joint Steering Committee, which AOPA co-chairs, studied 2,472 accidents and concluded in 2013 that AOA indicators are an effective tool for reducing the likelihood of loss of control. The FAA responded the following year with various steps to promote AOA installations, and equipment is now available at reasonable cost for most aircraft in the GA fleet.

The FAA has updated guidance for flight instructors to include the use of AOA indicators in training and flight reviews, also among the General Aviation Joint Steering Committee’s recommendations.

There is evidence that efforts made in recent years have begun to bear fruit: The GA fatal accident numbers hit all-time lows in 2013 and remained comparable in 2014; preliminary evidence suggests 2015 will prove little different.

The Air Safety Institute has provided free pilot education and tracked accident data for decades, and noted that 2013 and 2014 were the first years in the past half century with fewer than 200 fatal light aircraft accidents. Accident rates, a measure of accidents divided by (estimated) hours flown, fell to the lowest levels seen in 25 years.

The Air Safety Institute has joined the FAA, NTSB, and other organizations in seeking further improvement, participating in an NTSB forum on loss of control in September. The twenty-fourth edition of the Nall Report noted unprecedented declines in noncommercial fixed-wing accidents, and the Air Safety Institute has produced several videos, courses, and other materials that can help pilots improve their safety—all at no charge, many focused specifically on aircraft control and technique.

“Safety is the top priority for every pilot on every flight, and that’s reflected in the steady decline in GA accident rates,” AOPA President Mark Baker said in January 2015, when the NTSB released its previous Most Wanted list, also targeting loss of control. “By putting loss-of-control accidents on its Most Wanted list, the NTSB is sustaining the focus on an issue that has been at the forefront of safety efforts by AOPA, the aviation industry, and the FAA for some time.”

Air Safety Institute staff noted that analyzing the available data to get a true picture of the safety of one type of aviation or another, even within Part 91, is difficult. Making valid comparisons between the different types of missions and their safety records is fraught with potential pitfalls that may mislead.

“Loss of control makes up about 40 percent of the total number, or about 150 fatal accidents in GA aircraft,” noted Air Safety Institute Senior Vice President George Perry. “By any national measure this is a pretty small number, small enough that small variation in the number of accidents from year to year produces a large swing in percentages. Even so, at AOPA we believe that even one preventable accident is too many.”

The Air Safety Institute will continue to work with the NTSB and other organizations toward improving the numbers, and, more importantly, saving lives.