Get the app Get the app
Get the latest news on coronavirus impacts on general aviation, including what AOPA is doing to protect GA, event cancellations, advice for pilots to protect themselves, and more. Read More
Already a member? Please login below for an enhanced experience. Not a member? Join today
News & Videos Nailing the meatball

A visit to the 'USS George Washington' aircraft carrier provides a glimpse into the life of service members who toil around the globe on our behalf to maintain the freedoms we enjoy this holiday weekend. Never content with the status quo, flight test pilots demonstrate a new system for making carrier landings safer and more efficient.

The Grumman E-2C Hawkeye emerges from the dark shadow of the aircraft carrier’s towering island, its wings folded. A moonless night, the twin turboprop maneuvers across the ramp, lit only by the dim lights embedded in the deck. Everywhere, crew members scurry about, staying clear of the eight-blade propellers and the 81-foot wings as they unfold. The crew’s red, green, blue, yellow, brown, and purple shirts signify their role in launching the early warning aircraft.

Following the direction of a deck coordinator’s light wands, the pilot soon plunks the nosegear against the catapult shuttle and work begins anew by the deck hands to ensure the airplane is ready to launch safely.

The jet blast panel emerges from the deck, another signal that the launch is imminent. The quadruple tail surfaces and the towering dome atop the fuselage shudder as power is advanced. The pilot wiggles the control surfaces for a final check and then gives the ready signal. As one former naval aviator puts it, the pilot also pushes the “I Believe” button, attempting to assure himself that his colleagues outside and the equipment around him are truly ready for the wild ride ahead. A spotter makes one final check of the area and with the push of a button the steam-powered catapult hurtles the big airplane off the slowly rising deck and into the night. We onlookers gasp as the Hawkeye grabs air and struggles away. The deck hands, confident in their work and their equipment, hardly look and quickly begin preparations for the next one.

“I hate night operations,” declares an F/A 18 Super Hornet pilot, a common chorus among carrier pilots. What is an interesting challenge during the day for the talented pilots becomes a serious risk when the sun goes down. But the bad guys don’t necessarily sleep at night, so maintaining night proficiency is mandatory.

The Hawkeye crew makes a left traffic pattern and soon plunks down on the angled deck for a touch and go, one more step toward proficiency. Meanwhile, just off to the right, an SH-60 Seahawk helicopter hovers under the stars, ready to swoop in for the rescue should it be necessary. 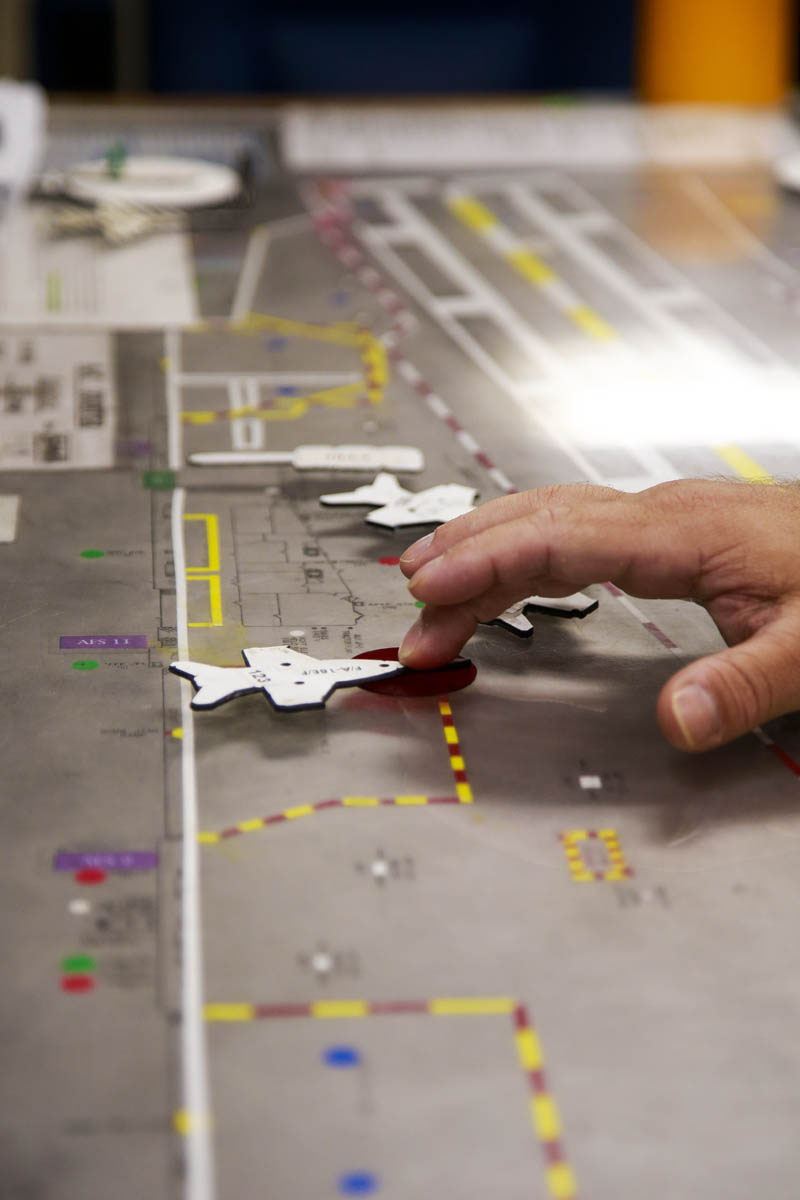 For the crews, our arrival on the USS George Washington aircraft carrier was routine, but for those of us who were experiencing a landing trap for the first time, it was anything but. The creaky old C-2 Greyhound twin turboprop carried us from Norfolk, Virginia, out to the carrier, a couple of hundred miles off shore in the Atlantic Ocean. Sitting backward in the windowless cabin, we listened intently through dual levels of hearing protection as the engine sounds changed and the gear thunked into position. As if flying down a drinking straw, the pilot expertly flew a three-degree glide path to the moving runway, catching the coveted number three wire as we were slammed into the seat backs.

The arrival kicked off our 30-hour stay on the massive carrier, which was doing sea trials of a new flight control system designed to make it easier for pilots to nail the three wire every time. Fewer bolters means less fuel, safer operations, and faster recovery of the squadron.

The new system, called Magic Carpet, fully leverages the Super Hornets’ flight control surfaces to help keep the pilot on the proper glide path as the carrier surges along at some 25 knots or so, creating the headwind necessary to allow the swept wing fighters to fly slow enough to safely land on the short runway. Turning final, the pilot flips on the “delta path” mode of Magic Carpet. Once the ship’s speed is entered, the mode computes a three-degree glide path to the deck, the same glide path the pilot sees via the “meatball,” the Fresnel lens system that provides visual guidance to the pilot. If the meatball shows the pilot high, he need only blip the flight control stick down a couple of times to center the ball. As soon as he lets go, Magic Carpet continues its three-degree descent. Too low, the pilot blips the stick up and lets go.

The goal, according to Capt. David Kindley, F/A-18 and EA-18G program manager, is to improve safety, reduce costs, and improve landing efficiencies while keeping control of the aircraft in the hands of the pilots. The Super Hornets are capable of auto landings, but the autoland system requires much longer final approach spacing and an assortment of gear and equipment on the aircraft and the ship to all work to perfection. Magic Carpet is just a software change to the aircraft’s fly-by-wire flight control system. When engaged, Magic Carpet uses whatever of the flight controls it needs to maintain that three-degree descent, instantaneously and constantly deploying increments of flaps, rudder, ailerons, and elevator to counteract wind and turbulence. 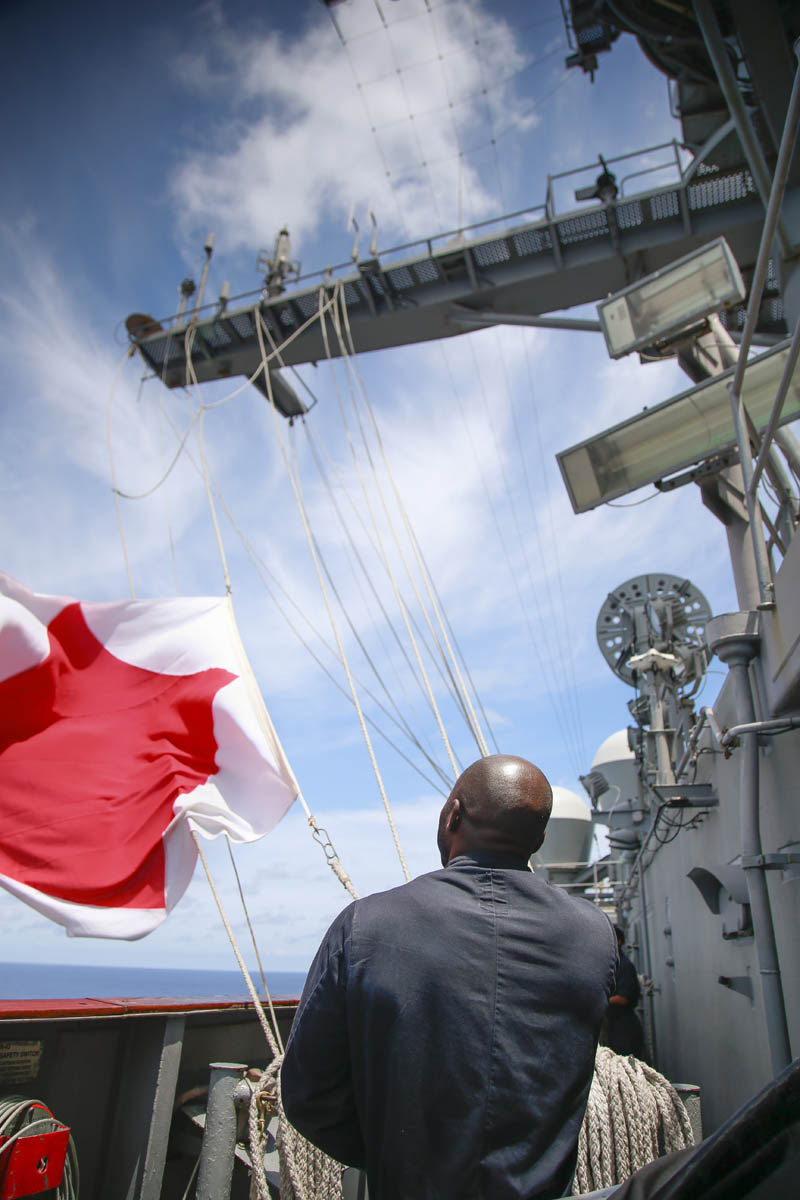 Test pilots Matthew Dominick and Christopher Montague reported that the test program during the last two weeks of June proved the capabilities of the system, dramatically lowering the standard deviation for touchdown points compared to normally equipped Super Hornets. “Landing aboard the ship is an administrative task,” said Dominick. “Training for it takes away from the time we could be devoting to the real mission of being out there protecting our troops on the ground.” In addition, the stabilized guidance allows the pilot more mental capacity to focus on things around him during that final 18 seconds before landing on the pitching deck.

“It’s dangerous,” said Montague, of landing on a carrier deck, an understatement for sure. Magic Carpet, once deployed to the fleet over the next couple of years, is intended to reduce the risk and may well reduce training time and recurrency demands, points that Kindley hopes to demonstrate over the remainder of the testing period.

Meanwhile, to us landlubbers, the short visit to the carrier was a reminder of the sacrifices our service members make day and night around the world. Day in and day out, personnel on the carrier, home at times to as many as 5,000 sailors and air crew members, work in dangerous, uncomfortable, and confined positions to ensure our freedoms at home. While enjoying your Independence Day celebrations this weekend, stop for a moment to say thanks to a service member for what he or she has done to keep us safe and free.

Editor in Chief
AOPA Editor in Chief Tom Haines joined AOPA in 1988. He owns and flies a Beechcraft A36 Bonanza. Since soloing at 16 and earning a private pilot certificate at 17, he has flown more than 100 models of general aviation airplanes.
Go to Thomas B Haines's Profile
Topics: Technology