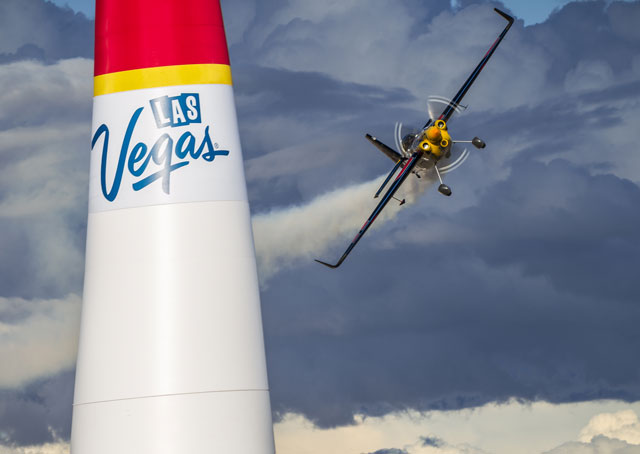 Americans had a tough year in the 2015 Red Bull Air Race World Championship, watching Paul Bonhomme take his third title while they struggled. The new season, which begins March 11 through 12 in Abu Dhabi, United Arab Emirates, will see Michael Goulian and Kirby Chambliss armed with newly modified racing airplanes, new talent behind the scenes, and a raw hunger for reaching the top of the podium.

“From the very first race in Abu Dhabi last year we were already thinking, how do we become faster?” Goulian said in a video posted by his team to YouTube that offers glimpses of the changes made over the winter.

Those mods will be tested in a breathtaking display of speed and airmanship over eight race weekends this year. The Red Bull series, officially sanctioned as a world championship, tests pilot skill and endurance, each competitor taking turns navigating a twisting course marked by inflated pylon gates, pulling up to 10 Gs in time trials often decided by thousandths of a second. One mistake can spoil it, dropping the team from the podium to last place in a heartbeat.

For the Americans, there was far too much of that in 2015. But that’s history now. Ancient history.

Changes to Goulian’s no. 99 race airplane, a modified Edge 540, include new winglets and faux shark skin on the wings. In an email exchange, Pablo Branco, Goulian’s team coordinator and the mastermind of the updates made for 2016, said application of an artificial analog to shark skin (which reduces drag in the water, as well as air) remains controversial in the racing airplane design community, and untested in actual race conditions by the team, though he said two other teams are using it. 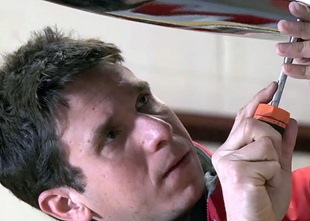 nterested to see how it will actually improve our performance in the track because we still weren’t able to race the airplane with it,” Branco, a native of Brazil, said in an email exchange.

The Chambliss team gained its own Brazilian connection in the form of new Team Coordinator Paulo Iscold, who previously worked as the aerodynamic and design mastermind on three-time champion Paul Bonhomme’s team. Bonhomme’s 2015 retirement, announced just after he took the title, left Iscold in search of a new Red Bull home, and Chambliss snapped him up. Iscold is also the mastermind behind a world record-holding airplane called Anequim, the Brazilian name for the mako shark, which set new world marks for speed on four cylinders in 2015.

Iscold’s arrival with Team Chambliss also connects the two American Red Bull teams in another way: Iscold’s former aerodynamics students from Brazil, now graduates, were among those Branco consulted on questions of winglets and shark skin and engine cooling modifications.

“It’s a very cool dynamic to see the professor and his protégés pretty much racing against each other!” Branco wrote, noting that he and Iscold are good friends, and Iscold’s test pilot taught Branco to fly. “Definitely fun to watch and be a part of it.”

In racing, there are many such friendships. It is a close-knit community. When the engines fire and the race begins, friendships may enter a kind of holding pattern, however. Both Goulian and Chambliss have made it very clear they have no intention of finishing second.

Iscold spent much of his own off-season working on cooling the engine of the Chambliss Edge 540 racer. A tradeoff must be balanced between airflow through the engine compartment and drag, and Iscold opted for a larger intake that creates more drag, hoping it will pay for itself in speed, and then some.

“What we have learned is that increasing the temperatures of the engine reduces the power of the engine. I have a joke that the best way to reduce the drag of an airplane is by increasing the power, so it doesn’t make sense to reduce the drag in this case,” Iscold said in a conversation posted on the team website. “Rather than reducing it, our goal is to keep it within a certain range to ensure the engine is happy with the temperatures.”

Team Chambliss will also sport a new tail on its Edge 540.

“We have seen throughout the years that teams are adding things to the airplane, like winglets. The winglets reduce drag during turns, but what happens in straight and level flight? That’s something we’ve ta 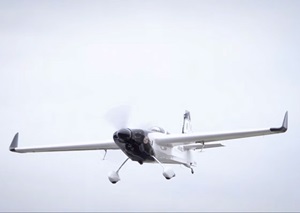 ken into account,” Iscold said. “By reducing the size of the tail, we have reduced the drag. In essence, it now compensates for the increased drag produced by the winglets during long straight-a-ways.”

Branco worked with Bully Aero of Burlington, North Carolina, to fabricate and install winglets that are significantly larger than the slightly upturned tips Goulian raced with in 2015.

“We have built what we feel is a monster race plane,” the team notes on its website. Goulian, in the video, credits Branco as the mastermind:

“The airplane that you’ll see in 2016 is really the brainchild of Pablo... He thinks about winning twenty-four, seven, three-sixty-five,” Goulian said, attributing his own attitude to his team coordinator, by the way. With winglets, new cowling and canopy, shark skin, and many other tweaks and changes, one thing neither team has mentioned is the bill, though it’s a safe bet that sponsors made it possible to even think about.

“You’re going to do all of that just for a trophy?” Goulian said he is often asked. “My answer is, ‘yeah.’” Paraphrasing three-time Formula One world champion Ayrton Senna, Goulian added: “If you’re gonna compete, you’re only worth it if you’re going to try to be first. And that’s the goal.”

“We are ready to win! We are very optimistic about this upcoming season,” Chambliss said. “We’ve added a new team member (Iscold) and 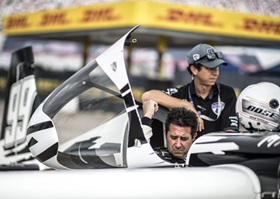 have made quite a few modifications over the off season. We still have a couple of things to sort out still, but we definitely think it’s going to be a great year for us.”

The clock has begun ticking. Teams are in Abu Dhabi, applying finishing touches, and will have seven more races after that in the quest for the title. Two of those will be on home turf for Chambliss and Goulian: Indianapolis on Oct. 1 and 2, and the season finale in Las Vegas Oct. 15 and 16. Tickets for all eight races are available online.

Goulian and Chambliss will also fly their race machines during a special demonstration at the Sun 'n Fun International Fly-In and Expo. They are scheduled to appear during the April 8, 9 and 10 afternoon airshows, weather permitting. Visitors can also tour a full-scale pylon, and other displays.