Get the app Get the app
Already a member? Please login below for an enhanced experience. Not a member? Join today
News & Media P&E: Never Again 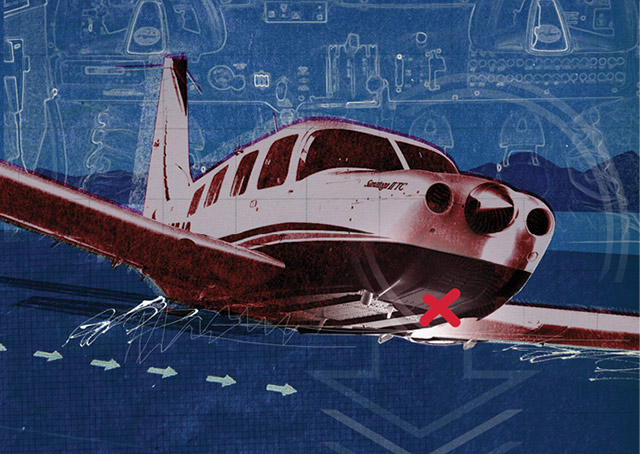 The 1985 Piper Saratoga climbed in crisp, spring air from Rialto, California. With only three onboard the turbocharged aircraft, we quickly reached cruising altitude and headed direct to Concord. The perfect day promised a perfect flight—except for the vague inkling that something wasn’t right. For the last few weeks my mechanic had been investigating occasional glitches, such as the alternator spontaneously dropping off and coming back online. But the engine had fewer than 80 hours since rebuild along with new accessories, so after another scan showed everything in the green, I pushed unease down by calling it imagination.

We reached Concord on time and conducted the day’s business. By 7 p.m., we departed on the return trip. As the runway threshold passed beneath us, I raised the gear. Suddenly the alternator dropped offline, but immediately came back—just as it had before. The ammeter dipped, and then displayed the slight charge normal for this phase of flight. Panel lights shone. Radios functioned. The engine sounded content, and the gauges looked normal. So, I continued the climb, and we leveled off at 13,500 feet. But I wondered aloud, “What is going on?”

By 9 p.m. a full moon drenched the mountains beneath us, and the Los Angeles basin glowed ahead. Then the alternator dropped offline again. I waited for a restart, but nothing happened. The ammeter showed deep discharge. The lights and radio flickered and dimmed. When the ammeter didn’t pop back online, I checked the circuit breaker and found it still in. Next I cycled the switch several times. Nothing.

I turned off everything not needed. So, I wondered, 20 minutes back to Bakersfield, 20 minutes ahead to Rialto. Fox Field on my left is a little closer. Should I divert? Except for the alternator, the airplane was flying nicely. Neither clouds nor precipitation nor wind presented complications. I had plenty of fuel. And I could see miles past my destination. The battery should last another 30 minutes, but I’d be there in less than 20.

Eighteen minutes later, I maneuvered to enter the pattern. About six miles north I put the gear lever into the down position. The mains extended and their green lights lit. But I didn’t feel the nose gear come out, and its light remained dark. Then the few things still on flickered, dimmed, and quit as the battery died. I shut everything off, put on my headband flashlight, and opened the pilot’s operating handbook to the emergency checklists. The essence of the emergency nose gear extension procedure was to slow to 90 knots and then pitch up and down until it fell into place. I tried, but nothing changed. Again. No change. Once more. Nothing. Then I thought, Maybe the gear is already down, but the indicator isn’t working. I flicked the master on and off. The main gear lights glowed feebly, but the nose gear light remained dark.

I pulled out my handheld radio and contacted the tower at Ontario International Airport, and then flew 11 miles southwest for a visual report. After a couple of fly-bys, the tower said, “The doors are partially open, but the gear itself is not down.”

Then the tower asked if I wanted to do an emergency landing there. I preferred to deal with the problem at Rialto where I could get it fixed.

I asked the sheriff’s dispatcher to turn on the runway lights since my handheld didn’t have enough power to activate the system. I set up for a soft field landing. In ground effect, I pulled the mixture and bumped the prop around until one of the three blades pointed straight up. Then the mains touched, and I lowered the nose as gently as I could. The airplane slid only 50 feet more and stopped on the centerline.

A walk-around revealed damage to the two ground-off prop blades. I walked to my truck, drove it onto the runway, and backed up to the Saratoga’s tail. I hooked a cable to the tiedown ring and towed the airplane in front of my hangar. The next morning we rolled the airplane into the hangar.

The alternator had obviously failed, but two surprises jumped out. First, the nose gear did not freefall into place because the battery voltage was too low to activate a solenoid that forces the nose gear down and forward against the slipstream. Second, the engine teardown revealed that while there was no damage from a sudden stoppage, the camshaft surfaces had worn more than three-eighths of an inch in just 80 hours. My mechanic estimated the engine was only five hours from complete failure. At 80 hours I was past the break-in oil change, but still 20 hours from the next oil analysis that would have revealed metal. So the nose gear failure included a serendipitous blessing.

Carrying and maintaining a spare radio, GPS, flashlights, and extra batteries were worth the effort and expense. And three hours of fuel on board granted me time to think and plan. Common knowledge said a battery should last 30 minutes. Mine lasted only 18.

The emergency gear extension procedures didn’t mention that you still need power to activate that solenoid, so if the alternator ever failed again in that (or similar) airplane, I’d lower the gear immediately. And I probably should’ve landed at the closest suitable field rather than pressing on to home base. Most important, from now on I’ll pursue persistent premonitions all the way to definite conclusions—even if that means replacing an alternator that hasn’t failed—yet.AOPA

Tom Hamic is a commercial contractor who manages a bottling company in Southern California. He flies a Piper Seneca. James “Jim” Rush Manley has been a flight instructor and mission pilot in South America. He continues to fly and is a freelance writer in Meridian, Idaho.