Get the app Get the app
AOPA Members DO more LEARN more SAVE more - Get MORE out of being a pilot - CLICK HERE
News & Media P&E: Proficiency

The lost lessons of ‘178 seconds to live’ 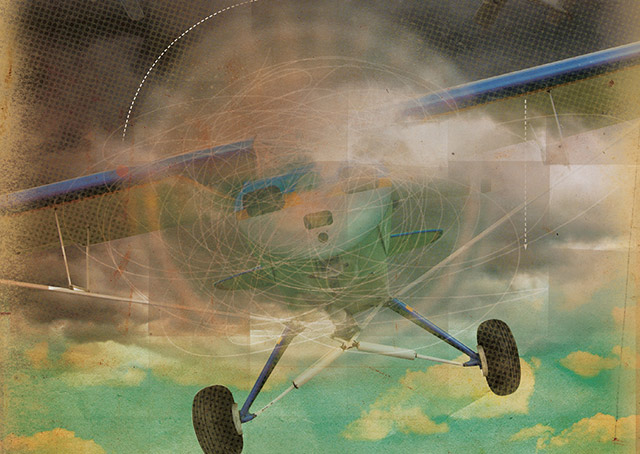 Some things never change, it seems. Take unintended flights from visual flight rules into instrument meteorological conditions: VFR into IMC. While these accidents represent a small number of the total crashes every year, they consistently represent a disproportionate percentage of the fatalities.

This was true in 2014. And the year before that. And the year before….In fact, in 1954, the AOPA Foundation was so concerned about the problem that it funded a University of Illinois study to shed light on VFR into IMC accidents, and to propose solutions that might change the outcomes.

The result was a study that lives on in infamy. I bet you even know part of the story—but not all of it.

The part everyone remembers is that the researchers took 20 volunteer noninstrument-rated pilots, put them in simulated instrument conditions, and recorded the results. Every one of the study’s participants went into graveyard spirals or a whip-stall attitude almost immediately after “entering” IMC. The shortest time to loss of control was 20 seconds. The longest was 480 seconds. The average was 178 seconds. Thus was born the “178 seconds to live” legend.

Actually, the study disappeared from history for almost 40 years, but then rose to prominence in the early 1990s. That’s when part of the study was written up in the second person, creating a countdown to disaster for a fictional pilot in IMC: “You now have 100 seconds to live. You glance at your altimeter and are shocked to see it unwinding.… You now have 45 seconds to live. Now you’re sweating and shaking.… You have 10 seconds to live.”

It ends, I kid you not, with, “You open your mouth to scream but… you have no seconds left.”

The attention-grabbing story spread like wildfire, generally with the statement that the author is unknown. It first appeared in print in a 1993 article in FAA Aviation News titled “178 Seconds to Live: Spatial Disorientation Can Be a Killer.”

In 2003, Transport Canada reprinted the scenario as one of its “Take Five…” bulletins. In 2006, it was the cover story of Flight Safety Australia. In the past decade, the “178 seconds to live” story has been featured on countless blogs, flight instruction websites, pilot Internet forums, a handful of books, and even advertisements for autopilots. The statistic itself, without the story, has appeared in articles in markets as diverse as General Aviation News, Smithsonian Air & Space, the Indian Journal of Aerospace Medicine, and the Montana Pilots Association newsletter. It’s even part of the Wikipedia entry on spatial disorientation.

In 2009, the story got a new life when the AOPA Air Safety Institute made a dramatic black-and-white video of the same text, complete with an increasingly rapid heartbeat as background audio and a large, green digital timer counting down the pilot’s remaining seconds of life. Like its written forbearer, the sensational video garnered a lot of attention. It also caused many pilots to question if the use of scare tactics is the best way to inform and educate the pilot community.

The institute itself wasn’t even sure what to do with the video. Calling it a “scare ’em straight” video, an Air Safety Institute blog asked readers to vote on whether it should be shown to new pilots.

Opinions were mixed, but one thing is certain: The video went viral as did its written counterpart.

Most of what’s written on VFR into IMC focuses on ways to avoid getting into the situation in the first place: getting better at reading weather, setting personal minimums, and avoiding get-there-itis. But not much has been written on what to do if it actually happens to you. That’s the real tragedy, especially when you learn the lost part of the story—the part no one remembers.

The original study was done in a Beechcraft Bonanza C35 using IFR-training goggles to simulate IMC. Each volunteer pilot was accompanied by an instructor, and an observer who recorded details of the flight. The pilots ranged in age from 19 to 60, with total flight times ranging from 31 hours to 1,625 hours. The purpose of the original study wasn’t to find out how quickly control was lost in IMC—not at all. The study’s charter from the AOPA Foundation (now the AOPA Air Safety Institute) was to “Devise simple, practical curriculum for special training program intended only to teach a pilot to keep plane upright if caught on instruments, make good enough 180-degree turn to get back to VFR weather, or get down through cloud deck.” In fact, the name of the study was the “180-Degree Turn Experiment.”

So where did the whole “178 seconds” thing come from? It was the pre-test, a control group to let the researchers measure how effective their training program was. The real purpose of the study was to measure the effectiveness of a new six-hour training program to teach noninstrument-rated pilots how to turn tail safely and get out of a bad situation by making a controlled instrument 180-degree turn followed by a descent. The authors called this curriculum a “fly out,” not a “fly through” procedure.

“The non-instrument pilot encountering either actual or simulated instrument flight conditions for the first time usually over-controls the airplane,” wrote the researchers. “He is also likely to fix his attention on one instrument and ignore the others.”

Their plan? Six steps to safety:

1. Use the inherent stability of the airplane as a partial solution.

2. Reduce the possibility of over-control.

4. Limit division of attention of the pilot.

5. Reduce the possibility of structural damage from over-speed.

6. Teach pilot the key instruments to focus attention on.

I won’t bore you with the details. You can read the original report online—just Google “180-degree turn experiment”—but in a nutshell, here’s the procedure laid out for pilots who have inadvertently entered IMC:

Center the ball. Hands off the yoke. Control the airplane with the trim tab. Lower the gear, reduce the power, and trim for slow flight. Make a shallow-bank 180-degree turn using the rudder only. Level off. Reduce power for 400 to 500 fpm descent.

After the training, how did the 178th Second Squadron of 20 volunteers do? Each pilot was put through three more scenarios, for a total of 60 sorties for the group. This time there was no 178 seconds. In 59 of the 60 flights, the pilots successfully controlled the airplane, completed a 180-degree turn, descended out of the simulated cloud deck safely, and “lived” to fly another day.

So what happened to the 180-degree emergency turn? Why do we remember the “scared straight” time of 178 seconds, but not the real reason for the study—much less its amazing results?

The AOPA Air Safety Institute’s position on accident avoidance has recently evolved and it’s certainly noteworthy. In addition to avoidance, ASI supports a more proactive approach to accident prevention that includes “training for safety.” In this way pilots are taught both how to avoid and how to deal with a situation (such as VFR into IMC) when it occurs. For instance, the institute’s newest seminar series, “Emergency: Getting it Right When Things Go Wrong” focuses on how to keep abnormal situations from becoming full-blown emergencies and gives advice for specific emergency scenarios.

180-degree-turn test subjects up for the challenge

Researchers chose the Beechcraft Bonanza C35 for their 180-degree turn experiment because preliminary flight testing indicated the technique would be most difficult to accomplish in the Bonanza: “In short, the assumption was made that if the subjects, none of whom had soloed a Bonanza, could master the technique in this airplane, they could master it in any single-engine airplane under 3,000 pounds gross weight.”

I don’t know. At some point the powers that be decided it was easier to try to scare people into avoiding a bad situation rather than to teach them how to work through the problem if they found themselves in it.

Later, a new technique began to gain popularity: the four Cs. Climb, Communicate, Confess, Comply. The theory was that if you just went into IMC, you are probably close to the ground from scud-running, so you need altitude. Take the airplane up farther into the soup, call for help, and get radar vectors to somewhere sunny. But I’m not sure that’s realistic, given the workload of controlling the airplane, changing the radio to the emergency frequency, changing attitude, and beating that 178-second clock. If the four Cs are such a great solution, why haven’t accident statistics shown a corresponding dramatic improvement?

By contrast, a simple training program in 1954 showed dramatic improvements in pilot performance in inadvertent IMC. Maybe it’s time to add a lesson from the past to the flight training curricula of today.

William E. Dubois is an aviation writer who holds a commercial pilot certificate with instrument rating, and advanced and instrument ground instructor certificates. He blogs his personal flying adventures at www.PlaneTales.net