Get the app Get the app
AOPA will be closing at 2:30pm ET Wednesday, November 23rd, and will remain closed Thursday and Friday in observance of the Thanksgiving holiday. We will reopen Monday November 28th at 8:30am ET.
AOPA Members DO more LEARN more SAVE more - Get MORE out of being a pilot - CLICK HERE
News & Media Because he flies 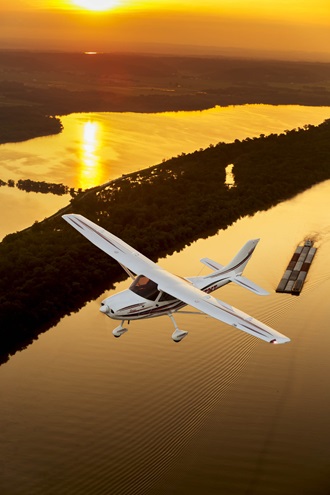 A young man at my home airport recently passed his private pilot checkride, and one of the dozen or so people who gathered there to mark that happy occasion asked his parents a seemingly off-hand question: How much it had cost for their son to reach this milestone? The parents were caught up in the moment, and their sense of pride/relief/joy was more prominent in their minds than their checking account balance on that sun-splashed summer afternoon. But the question got me thinking about the not-insignificant amount this family had spent on flying, and whether it was worth it.

Their son graduated from high school a few weeks before getting his private pilot certificate, and a few months later he was going off to college. I don’t know whether he aspires to an aviation career, or frankly, whether employment considerations matter to the overall value equation. But having witnessed the transformation that took place in this teenager from the day he somewhat hesitantly started ground school as a high school sophomore, to the self-confidence that blossomed at the time of his first solo and the determination, skill, and knowledge he demonstrated during his checkride, I’d say this family got the deal of the century.

But having witnessed the transformation that took place in this teenager from the day he somewhat hesitantly started ground school as a high school sophomore to the determination, skill, and knowledge he demonstrated during his checkride, I’d say this family got the deal of the century.

Because he flies, their son has learned a skill based on poise and persistence. His takeoffs and landings were atrocious at first. But he stuck with it, learned from his errors, took direction from his flight instructor, and consistently improved.

Because he flies, he has taken on responsibilities and self-reliance that few of his peers yet know. As pilot in command, he is the final authority on the safe operation of every flight—and the passengers he takes aloft entrust him to make good decisions. The fact that so many of his friends and family are not only willing but eager to do so tells me their confidence is well placed.

Because he flies, he has learned both independence and teamwork. The independence comes from making decisions and being answerable for the consequences. The teamwork comes from cooperating with fellow pilots, mechanics, air traffic controllers, and line service workers, and knowing that all in our aviation system rely on each other.

Because he flies, he’s learned respect. He’s studied the aviation giants that have made it possible for us to fulfill mankind’s long-held dreams of flight. He’s interacted with professional pilots who have flown tens of thousands of hours and crossed oceans, and he recognizes their hard-won mastery of their art. He’s seen the painstaking work that goes into designing, building, and maintaining vintage aircraft, and he’s aware of the craftsmanship that goes into every detail.

Because he flies, he’s got a healthy curiosity about the world, its geography, its weather, and the complex interplay between them. He can read aviation charts, and knows how to judge wind speed and direction from the surface of a lake, smoke stacks, or the shadows of clouds on the ground. He can navigate accurately using sophisticated avionics, or only a compass and a clock.

Because he flies, he’s learned to plan for the worst, to prepare for aerial emergencies, and to always be ready to implement a Plan B (or C, or D) when things go awry. He’s experienced the limited value of forecasts firsthand. And he knows limitations such as how far, how fast, and how high his aircraft can fly; how much fuel it needs to reach a destination, and how much weight is safe to carry.

Because he flies, he’s learned to focus on the immediate task at hand. He can push the nagging trivialities of daily life aside and—at least during his time aloft—live entirely in the present.

Because he flies, he’ll be less tempted by the dangerous impulsivity that does such harm to every generation. Driving recklessly means nothing to those who know they can fly far faster than any highway speed limit. Excessive drinking and drug abuse can ground aviators, so hopefully he’ll steer clear of them. Flying rewards healthful moderation.

None of us can know what the future holds for our children. We do what we can to prepare them for this beautiful, violent, endlessly surprising world, but they make the choices that matter. Having watched this one young man’s journey from the distance of a few hangar rows, I get the strong feeling that flying has prepared him magnificently for life’s inevitable challenges. When times get turbulent, he’ll keep the wings level. In adversity, he’ll see things for what they are and coolly consider his options. When moments of decision come, he’ll commit without hesitation.

I’ve got only admiration for his parents, confidence in him, and I’m grateful to be part of an aviation community that could bestow such meaningful and lasting gifts on a deserving young person.