Get the app Get the app
AOPA will be closed July 4th, in observance of the Independence Day holiday. We will reopen at 8:30 am ET on Tuesday, July 5.
News & Media How it works

When you really want to be seen 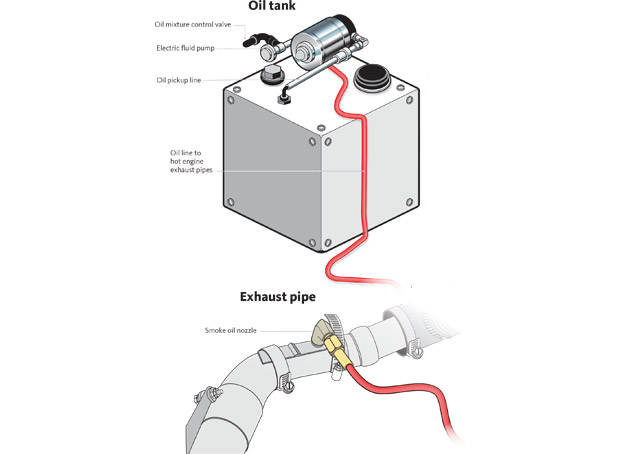 The billowing white smoke that trails airshow airplanes, making them visible for miles, is the result of some highly specialized equipment.

The system starts with a tank to hold the smoke oil—a paraffin-based mineral oil. The tank must be sturdy and well-secured, since the oil is heavy (8 pounds per gallon) and the aerobatic airplanes that carry it are subjected to high-G maneuvers.

An electric fuel pump (similar to those used for piston aircraft engines) moves smoke oil from the tank to at least one nozzle connected to an exhaust pipe. When the liquid smoke oil meets hot exhaust, it burns instantly and creates nontoxic, biodegradable, high-visibility smoke.

The volume of smoke oil pumped into the system must be carefully metered to match the exhaust. Too little oil, or a clogged nozzle, means a paltry plume. Too much and the tank will run dry too soon—and the viscous oil won’t burn completely. Multi-nozzle smoke systems tend to put out steady, continuous smoke trails.

Smoke tanks must be vented, and the lines should have a filter to prevent nozzles from getting clogged.

The pilot has an electrical On/Off switch in the cockpit that activates the smoke pump—and pilots tend to be judicious with smoke oil use, because the stuff is expensive. A 55-gallon drum costs more than $700, or about $13 a gallon.

An aerobatic performer typically goes through about five gallons of smoke oil during an airshow performance, and a warbird such as a North American T–6 burns three or four times as much. (A typical smoke system for a single-engine piston airplane consumes about 0.8 gallons of smoke oil per minute.)