Get the app Get the app
Already a member? Please login below for an enhanced experience. Not a member? Join today
News & Media In Focus: Going Drone 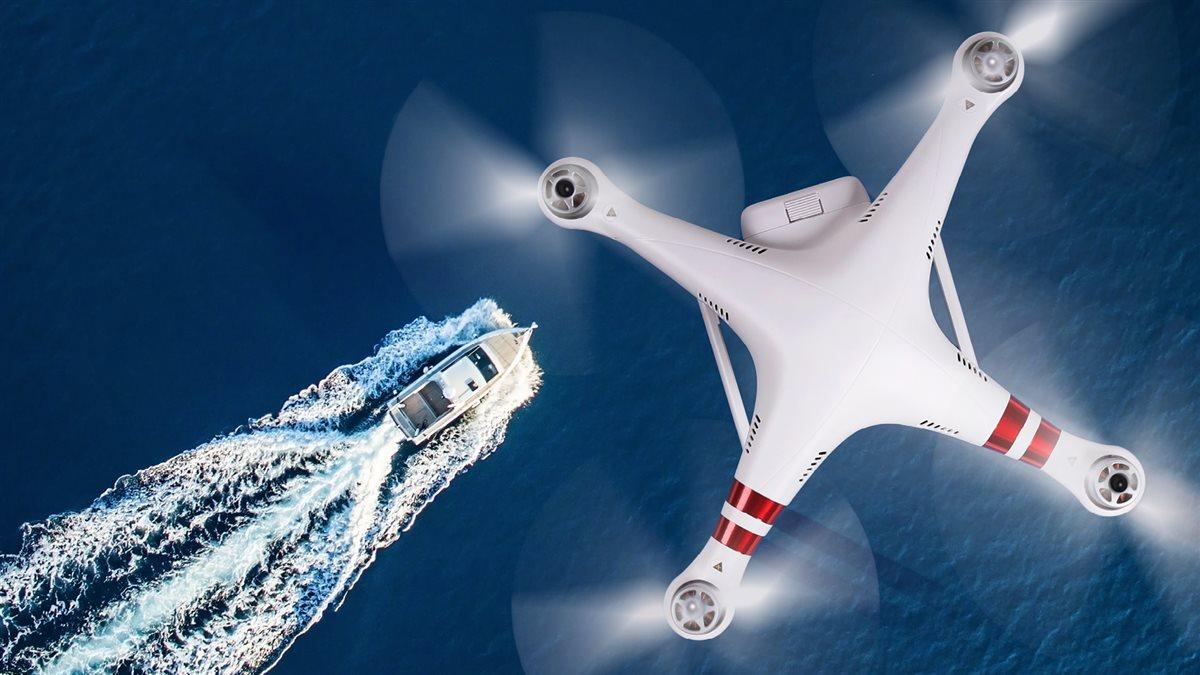 If there is one type of flying machine that has snuck up on the aviation industry, it’s the unmanned aircraft system (UAS), often called drone or unmanned aerial vehicle (UAV). In 2012, the FAA estimated that 30,000 drones could be zipping through the airspace by 2020, but that number appears to have been grossly underestimated: The FAA said it registered nearly 300,000 unmanned aircraft owners in the first month after mandatory registration took effect on December 21, 2015. Soon there were more drone registrations than manned aircraft in the FAA registry.

Who’s flying unmanned aircraft? The answer appears to be everybody. There is significant interest from a wide demographic to fly for fun or profit­—or both. As a photographer, I saw potential in drones as a tool to get the right shot, and I recently joined the ranks of drone owners and aficionados. 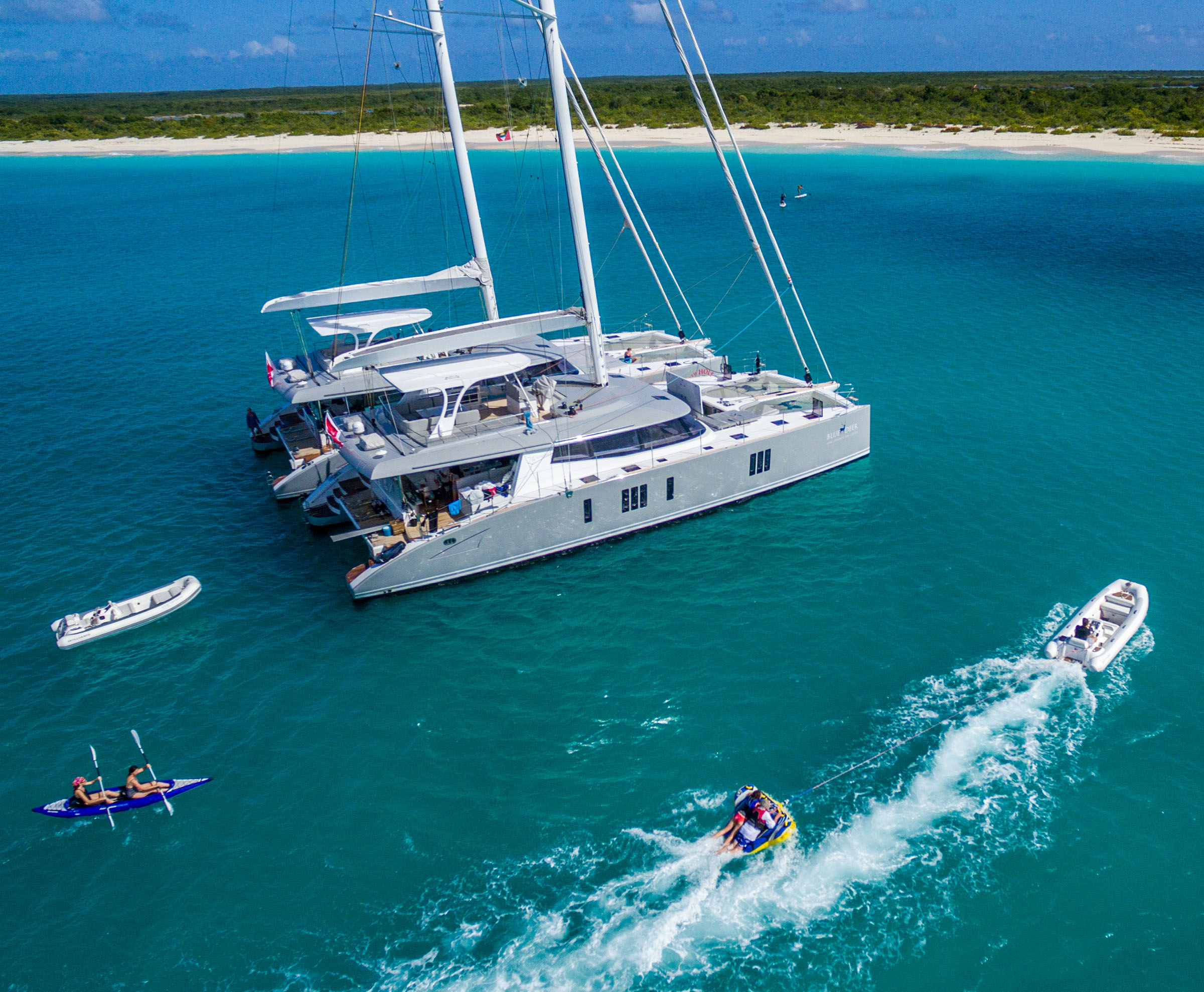 In early 2015 I began looking into acquiring a camera drone as a possible tool to add to my commercial photography business. My photo and video work is primarily in the yachting industry, and much of that is helicopter aerial work. I spend a good amount of time hanging out of a Robinson R44 or a Bell 206 chasing boats around the ocean with the help of some excellent pilots. The flight portion of the job is the best part of my day, but if we get too close, the rotor wash can easily blow the cushions off the deck chairs and generally raise hell with the scene of models and props we are focused on below. Drones are capable operating in a very close working environment without disturbing the scene; then they can pull back to reveal the entire yacht, an impossible camera move for a helicopter to duplicate.

Although there is some crossover in capability, I didn’t see the drone as a replacement for the helicopter. They are very different tools with different strengths and weaknesses. The new camera platform offered a new perspective that I couldn’t wait to get my hands on.

But the more I drilled down on the subject, the more questions surfaced: How to get started? How to choose the proper aircraft? Should I sign up with a flight school, or just buy a drone and work through some trial-and-error on-the-job training in the wide- open spaces? I sourced a number of outfits around the country offering ground school and flight training with durations of three to five days and fees ranging around $3,000 to $5,000. They all include assistance with an application to the FAA for a Section 333 exemption, a requirement for anyone intending to fly a drone for hire (see “Drone Rules,” p. 82).

I picked up a relatively inexpensive, used DJI Phantom 2 quadcopter to use as an “expendable” flight training platform. With some advice from the previous owner, my observer/drone-catcher/girlfriend and I began practice flights over open water away from any populated area. Since most of my work is boat-related, I had to get used to working in the unforgiving environment of open water. I found that even with a pilot’s understanding of flight and flight controls, there is a serious learning curve to operating a drone with precision from a fixed position. It gets even more interesting when operating from a moving position—in the same way that landing on an aircraft carrier is more challenging than landing on a paved runway.

Filming requires smooth and steady control. The drone operates kind of like a helicopter but with two small joysticks controlling eight movements: throttle up, climb; throttle back, descent; forward; reverse; left; right; left (yaw) rotation; and right (yaw) rotation. No pitch, no roll. Now add the camera controls to the operational load: framing the shots shooting stills and video, setting exposure, and controlling the camera angle through 90 degrees of available camera gimbal pitch. It takes some time to learn to do it well. 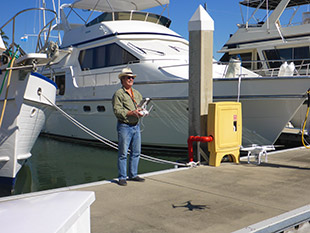 Delicate coordinated control input to both joysticks is required to climb gently, move right, and rotate right all at the same time to circle a target and keep the lens centered on it while the pilot views the scene on an iPad. Things get a bit more challenging when shooting and circling a moving target. I understood what I needed to do: practice, practice, and more practice.

The Phantom 2 proved to be a good basic trainer and thankfully has remained dry so far. The continuing search into commercial unmanned aircraft photography operations eventually led me to Jesse Badger, chief operating officer of Precision Unmanned Aerial (PUA), an unmanned aircraft systems flight management company based in Portland, Oregon. The stated mission of PUA: “Specializing in the collection of data for the utility, agriculture, and mining sectors, Precision Unmanned Aerial brings cutting-edge technology together with real-world manned aircraft management experience. Precision additionally works with companies and individuals looking to enter the commercial UAV market in need of assistance with federal regulatory procedures, logistical support, and UAV management.”

Being “an individual looking to enter the commercial UAV market,” it was that last sentence that caught my attention. Badger and I met in Boston to discuss the possibilities, and it turned out to be a perfect fit. Badger was willing to have me team up with PUA and work under its licensing and Section 333 waiver while supplying flight training and ongoing support, and advising. It was a way for me to operate in compliance before I could obtain my own waiver.

I purchased the DJI Phantom 3 Advanced camera drone in August 2015 and began working it. Flight duration is dictated by battery life: around 12 to 15 minutes flight time, depending on how hot you are running it, and leaving a comfortable reserve. Once we have the boat in position we burn through several batteries on a typical job, capturing a variety of moves for stills and video: from close-up low angle to climbing pull-backs and direct 90-degree-down shots moving across the vessel, whatever the specific project calls for. Takeoff and landing from a fixed base is relatively simple. Takeoff from the deck of a moving vessel has its own set of problems, namely that the drone wants to remain stationary while the vessel moves out from under it. In this circumstance, I’ve found it better to hand-launch from my observer and have her catch it on the return.

Since teaming up with PUA I’ve been working on building my flight skills whenever possible. Working over open water is becoming less daunting, but when all the preflight preparation is complete and it’s time to lift off from the deck of a moving boat, I still find that I have to accept the possibility that my aircraft may become a submarine on a one-way dive to the bottom of the ocean.

Jim Raycroft is a lifestyle and location photographer, pilot, and drone owner. 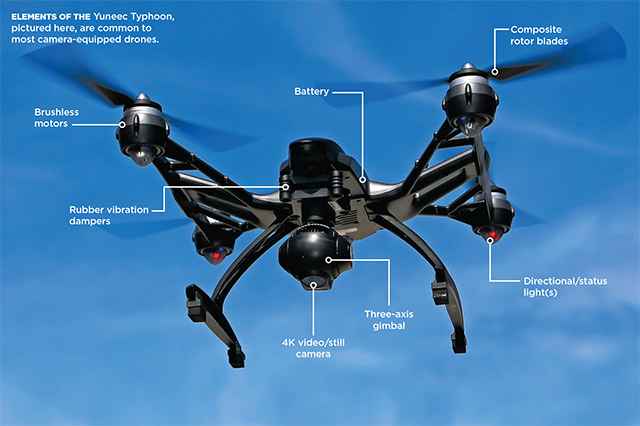 The growing popularity of drones hands a daunting task to the FAA. Unmanned aircraft systems resulted in thousands of dollars in sales over Christmas 2015, leaving the FAA racing to catch up with development and implementation of effective regulations for their use in U.S. airspace.

By fall 2015, every TV news outlet had been blaring about drones being the absolute must-have Christmas gift. Reacting to the expected swarm of swirling plastic about to become airborne on Christmas Day, the FAA issued a requirement that all unmanned aircraft systems would have to be registered beginning December 21, 2015. The registration rule applies to drones weighing between 0.55 and 55 pounds being used for strictly recreational purposes. Registration may be completed online (www.faa.gov/uas/registration).

Commercial operators must comply with more complex requirements, including these:

The business of unmanned aircraft has ballooned into a multibillion-dollar industry, and things are changing fast in the drone world with research and development, and the regulations covering their use. As you might expect, not everyone is enthusiastic about unmanned aircraft. Concerns about safety and privacy are driving a push toward regulations to keep the airspace under control, and there are bound to be more negative, knee-jerk reactions. Charlottesville, Virginia, has established a No-Drone Zone that “prohibits the production, lease, or sale of drones within the city limits” and “prohibits the use of drones for surveillance, precludes information obtained by drones to be used in court, and restricts any drones from carrying anti-personnel devices.”

Visit the FAA website for the most current information. —JR