Get the app Get the app
Get the latest news on coronavirus impacts on general aviation, including what AOPA is doing to protect GA, event cancellations, advice for pilots to protect themselves, and more. Read More
Already a member? Please login below for an enhanced experience. Not a member? Join today
News & Videos Uber envisions hiring pilots

Uber, the ride sharing company that has taken on the taxi industry, is now envisioning a major disruption of the air taxi industry that could mean thousands of new pilot jobs. The company published a detailed vision of a future that will include on-demand aviation using electric VTOL aircraft flown, at first, by pilots who will enjoy a lower burden of certification and training. The white paper published Oct. 27 maps out a plan to develop and certify the technology that will eventually fly without human help, though autonomy is likely to be years, if not decades, down the line. 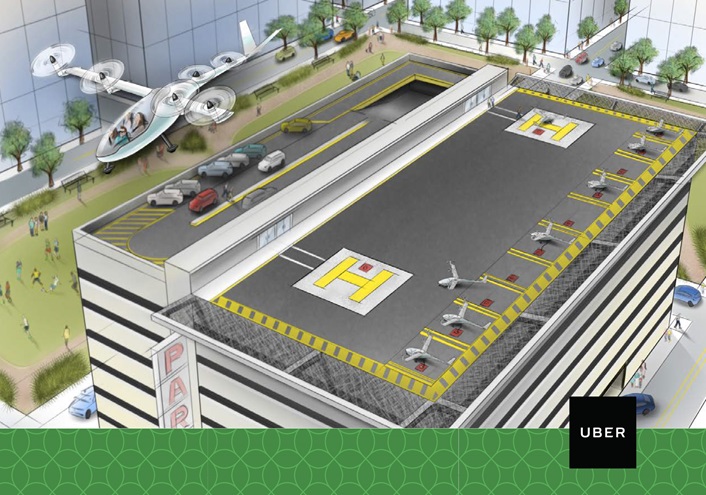 Uber, the company built on automotive ride-sharing, now envisions on-demand transportation that will, in the early years, create thousands of new pilot jobs and, the company hopes, reduce training requirements with technology. Image courtesy of Uber.

Uber’s vision, detailed in a 98-page paper titled “Uber Elevate,” draws on years of research by NASA and private industry into the concept of small, electric air vehicles capable of vertical takeoff and landing, and distributed across urban centers in huge numbers. While the long-term vision includes autonomous operation, the authors of the Uber paper expect that building the system will require pilots, and many of them. Reducing the cost and time required for training through technology will be a key part of realizing that vision.

“While we have planned initially for commercial pilots operating under today’s Part 135 rules and their equivalents outside the US, we anticipate that demonstrating successful operation with early vehicles will reduce the requirements for pilot experience in conventional aircraft based on reduced pilot task-loading, and more fundamentally, the reduced scope of tasks for which the pilot is responsible,” wrote the Uber authors, Jeff Holden, chief product officer of Uber Technologies, and Nikhil Goel, product manager for Uber Elevate. “This is similar to what the FAA has done in the definition of the light-sport pilot license which requires roughly half the time that a private pilot license does. Not only must the FAA be convinced, but the insurers who cover the risk of the operation will need to see that pilot skill and experience requirements are reduced.”

The paper offers a seductive vision of a future transportation system where passengers are whisked above congested urban traffic, cutting travel times currently measured in hours to minutes.

The authors include a timetable for certification that anticipates human pilots remaining at the controls through the next decade and beyond. In the Uber Elevate model, pilots will require less training to achieve higher safety.

“VTOLs with autonomous capabilities will significantly shift pilot skill requirements,” the authors wrote. “Presently, pilots must monitor both the vehicle’s trajectory in relation to the desired path and also adjust many vehicle state parameters to force the trajectory to conform to the desired route. Autonomy refers to the ability of the vehicle to make these adjustments itself; pilot inputs are limited to commanding a desired trajectory rather than the means to achieve it.”

Uber expects the Elevate model will reduce costs for passengers as well.

“We also believe that in the long-term, VTOLs will be an affordable form of daily transportation for the masses, even less expensive than owning a car,” the paper states. “Normally, people think of flying as an expensive and infrequent form of travel, but that is largely due to the low production volume manufacturing of today’s aircraft. Even though small aircraft and helicopters are of similar size, weight, and complexity to a car, they cost about 20 times more.”

Increasing safety by a factor of four compared to current air taxi operations, as well as reducing noise and emissions, are also part of Uber’s vision.

“The exciting thing about Uber getting involved in urban air-taxi is that they bring the big picture for creating feasibility for the entire transportation system,” said Mark Moore, senior advisor on NASA’s on-demand mobility research, in an interview with Aviation Week. “Uber is bringing a much-needed missing element—a company ready to buy these vehicles and focus on development of the required infrastructure and local approval processes.”

Uber invited feedback on the concept, and said publication of the paper is only one step toward a future where electric VTOL aircraft will carry passengers around cities with greater safety and lower cost.

“The publication of this white paper marks the start of that journey. From here, Uber will be reaching out to cities, vehicle manufacturers, prospective representative users, and community groups along with key business, infrastructural and regulatory stakeholders to listen, learn, and explore the implications of this urban air transportation movement,” Holden and Goel wrote. “In the coming weeks and months, we plan to delve into the political, policy, infrastructural, and socio-economic issues that will need to be addressed.”