Get the app Get the app
News & Media How it works: Constant speed propeller

How it works: Constant speed propeller

A prop for all reasons

The twist in propeller blades is called pitch. If pitch is too great, it creates drag and robs you of takeoff power. Too little, and you are forced to run the engine faster to achieve cruise speed. Most likely your trainer is not equipped with a constant-speed propeller, but one with fixed pitch. Your fixed-pitch propeller isn’t the best for takeoff but not bad, and isn’t the best for cruise—but not bad. What if you could change those “not bads” for “goods”? 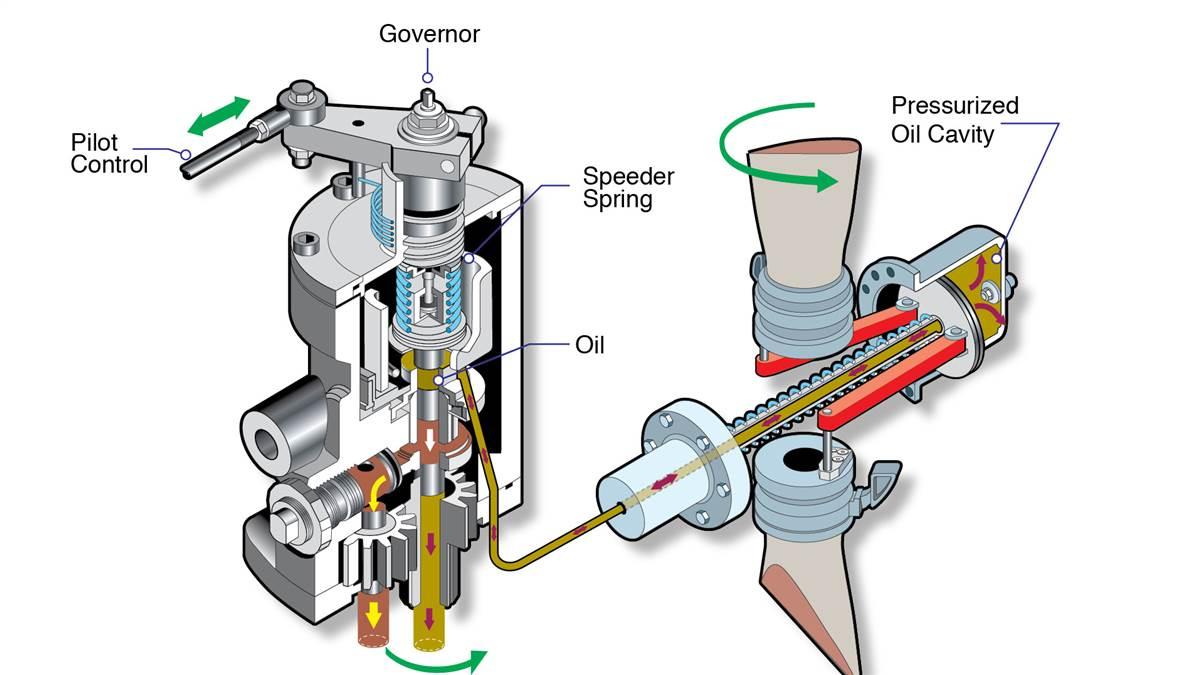 The pilot uses a propeller control in the cockpit to set revolutions per minute. That setting determines how much oil will be pressurized into the propeller hub. The oil pressure moves a plate that either reduces the pitch of the blades to allow the engine to generate more power, or increases their pitch to take a bigger bite of air. A flatter pitch is used for takeoff, when more power is needed to climb.

Other types of variable-pitch propellers

Some aircraft have ground-adjustable propeller blades. That means you decide on the ground before you take off whether you want a good-climbing airplane or a fast-cruising airplane. You’re stuck with that setting for the duration of the next flight. Some aircraft use an electric propeller system that allows the pilot to select in flight a setting in the cockpit, such as takeoff or cruise, while the engine is operating. Set it to Takeoff and after reaching altitude, change the switch to Cruise.

That’s the job of the constant-speed propeller. The pilot sets a low or fine pitch (high rpm) for takeoff, and a higher or coarse pitch (low rpm) for cruise, using a propeller control knob or lever next the throttle.

What makes the concept work is the propeller governor. The governor takes in oil under pressure from the engine, usually about 50 to 70 pounds per square inch, and boosts it to 300 psi. That pressure is sent to the back side of the propeller, where its job is to push on a plunger that moves gears. The gears change the propeller blade angle. The plunger’s position is limited by a “speeder spring” that, in turn, is controlled by the pilot. When the plunger gets to a setting chosen by the pilot, oil is released back to the engine and the plunger maintains its position, keeping rpm constant at that setting.

The constant-speed propeller is dumb. It does whatever the governor tells it to do.

How to save your engine