Get the app Get the app
Get the latest news on coronavirus impacts on general aviation, including what AOPA is doing to protect GA, event cancellations, advice for pilots to protect themselves, and more. Read More
Already a member? Please login below for an enhanced experience. Not a member? Join today
News & Videos Gear for the mission

What's in your flight bag?

What sorts of gadgets are pilots using to make flights more enjoyable for themselves and their passengers? It depends entirely on what they do. Here are some considerations for gear from pilots flying six different types of missions. Maybe there are some suggestions here for your next flight.

For discounts on select products you see on these pages, visit Aircraft Spruce & Specialty Co. online and enter code ACSGEAR at checkout.

Thanks to Aircraft Spruce and Sporty’s for providing the products seen here. 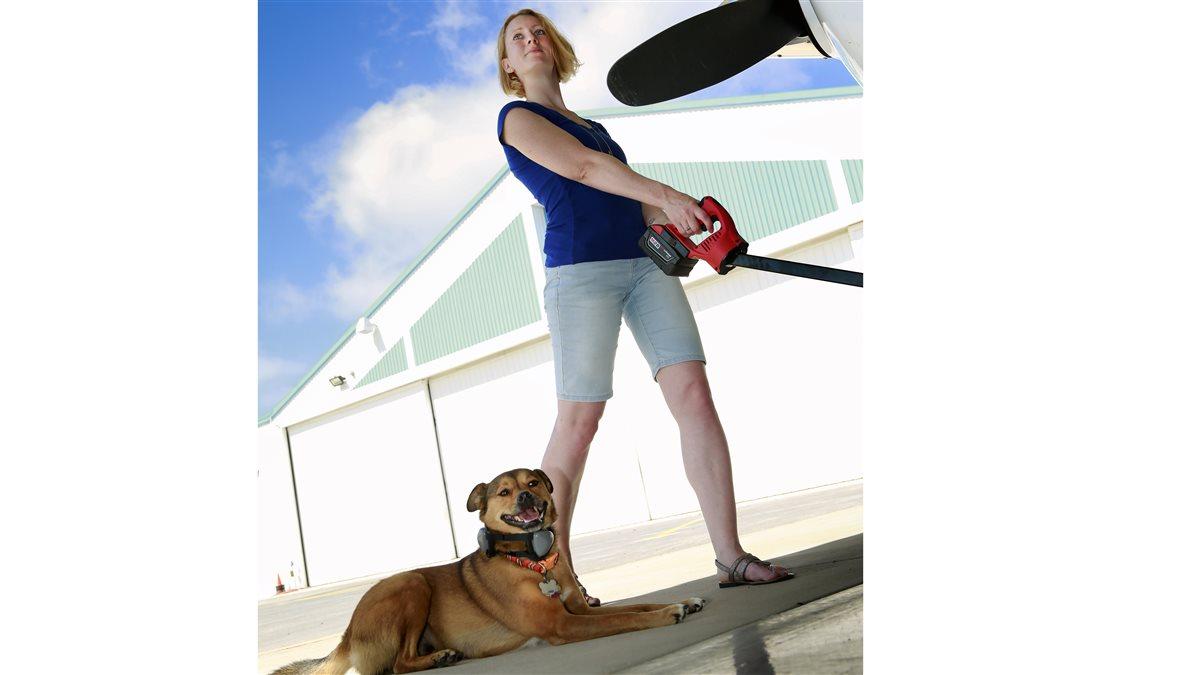 Victoria Neuville writes The Pixie Pilot blog and wrote and published a children’s book about her dog, Turbo the Flying Dog. She works in an aviation insurance company to finance her flying.

Her choice of headsets—the Quiet Technologies Halo in-ear product—doesn’t give her headset hair. She doesn’t need active noise reduction because the headset provides the earplugs. For her instrument work, she uses her ForeFlight app for its instrument charts on an iPad Air 2. She is switching to a Garmin Pilot app subscription because it can talk to the recently installed Garmin aera 796 in the panel of the Cessna 172 she flies.

Future gadgets she has her eye on include a motorized towing device, because of her small size.

Turbo has his own airplane kit. Most important are the his Mutt Muffs for canine hearing protection, plus a water bottle that flips open to become a bowl. 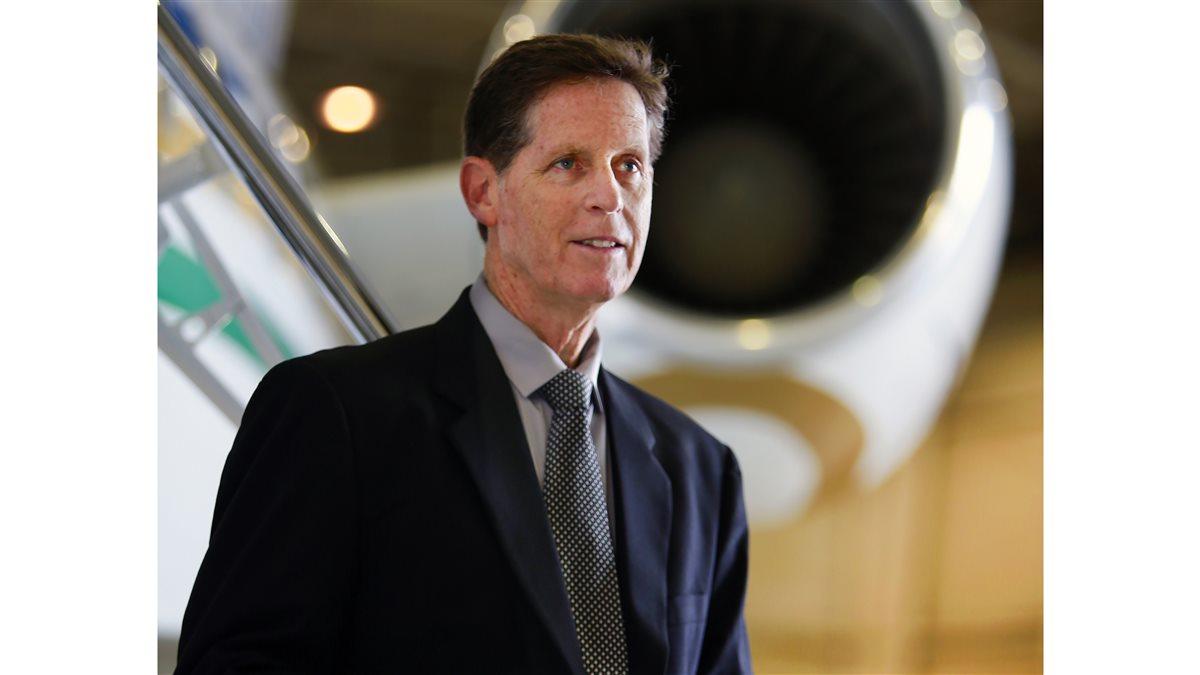 Peter Branower, 63, flies corporate jets just about anywhere. He most often flies a Bombardier Challenger 604. His company is required to carry paper charts, but he also keeps an electronic backup of Jepp-View charts. He carries all the flight manuals for the airplane.

An iPad Air mounted out of the way on a RAM suction-cup mount fills his in-flight needs. Using his iPad, he can update weight and balance when the planned four passengers turn out to be six.

His Telex Airman ANR 850 headset is provided by the company and draws its power from the audio jack—no batteries needed.

“I always take running stuff. I’ve been a runner for many years,” he said. “Many pilots are people who work out in some form, so whether it’s a gym or something, they’ve got [workout] clothes so they’re not just sitting in a hotel room not doing anything.”

Branower also includes a small travel umbrella, lead for his mechanical pencil, extra eyeglasses, his immunization record, a battery charger for his iPad, converters for European power, and this tip: If you forget your charger, check the hotel front desk for one someone else may have left behind.

More gear for the jet pilot 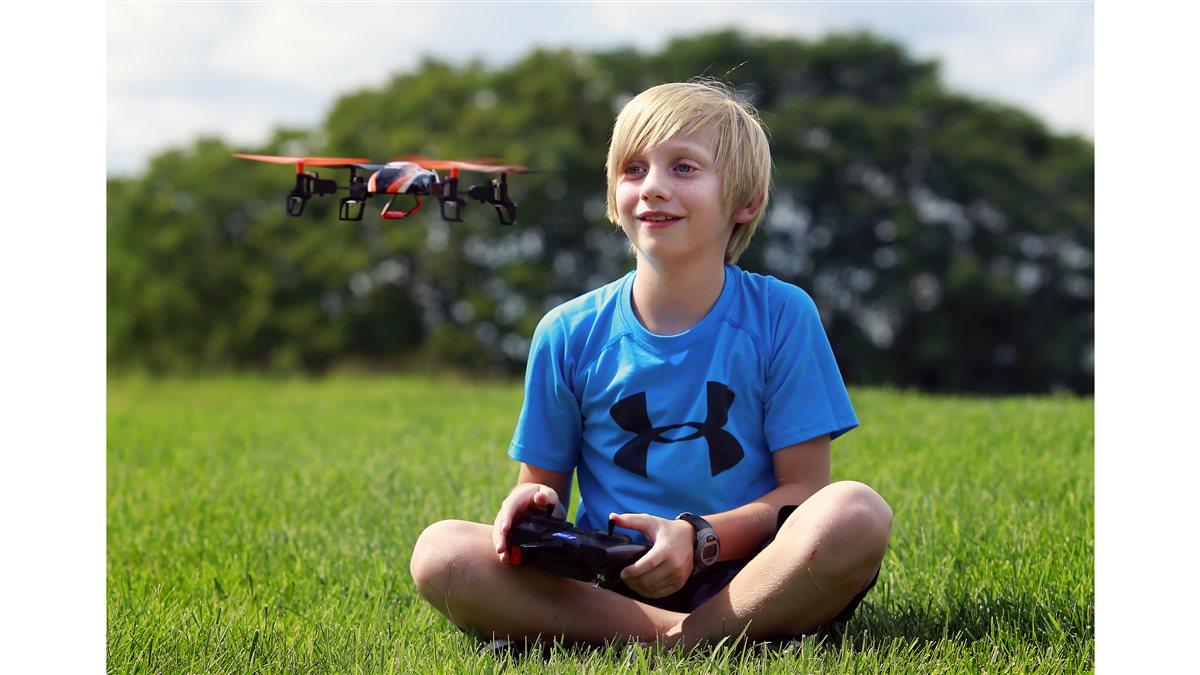 Ben Robyns, 11, is no beginner when it comes to drones. With three years’ experience, he’s moved up to a Parrot drone and has his eye on more sophisticated drones—after he gets more flying experience so he won’t crash it, “and blow $500.”

His first two drones were cheap ones bought off of Amazon.com, and they broke.

Ben’s father played a role in encouraging him, given that he flies for Southwest. “My dad’s a pilot—that’s part of the reason. The second reason is I’m a Boy Scout and I had a camping trip to the AOPA headquarters and camped in a field.” During the camp-out he learned he can solo a glider when he is 14.

“I like science. That sounds cool. Chemistry is really fun and I think the human body sounds cool.” Maybe he ends up being a doctor and approving his dad’s flight physical?

More gear for the future pilot 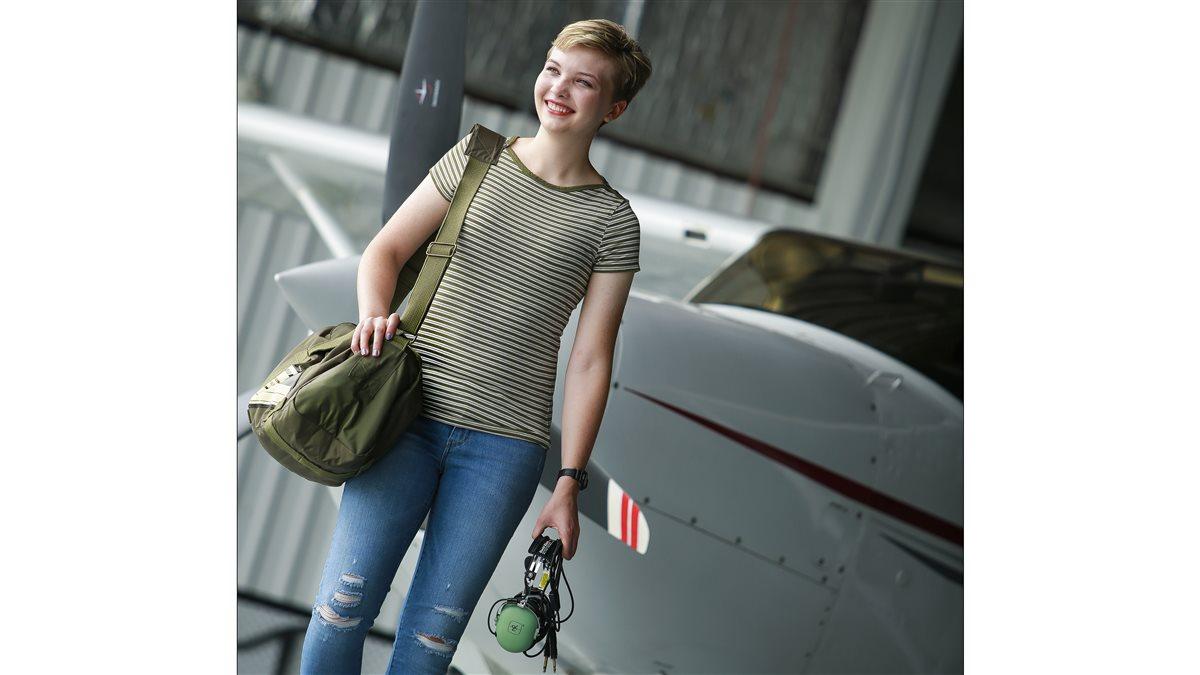 Casey Jung, 18, graduated from high school this year with 50 hours of flight training, all ready for the private pilot practical test. She hopes to get an instrument rating once she reports to Virginia Tech—on a full scholarship. That will free up funds saved for college that can be put into the instrument rating.

When told she needed a headset, she bought a David Clark H10-13.4 passive noise-cancelling headset.

To keep new grads safe, her high school had a Safe and Sane party where it raffled off a lot of neat stuff. Jung won a Samsung Galaxy. She has used it for SkyVector flight planning and FltPlan.com, and is planning cross-country flights with it. “I like to use that to supplement my cross-country planning, because then I can cross-check and cross-reference things and make sure [the information] is pretty correct.”

She also has a kneeboard to get through her training and a flight computer, but on that computer “you’re just spinning a dial,” she said. She prefers the TI-85 because she likes to know what sorts of calculations are being done.

Then there’s the matter of GPS. She isn’t sure she’ll “go out and buy a GPS system.” The Cessna 172N she trains in the most doesn’t have a GPS in the panel. The future is loaded with possibilities.

More gear for the student pilot 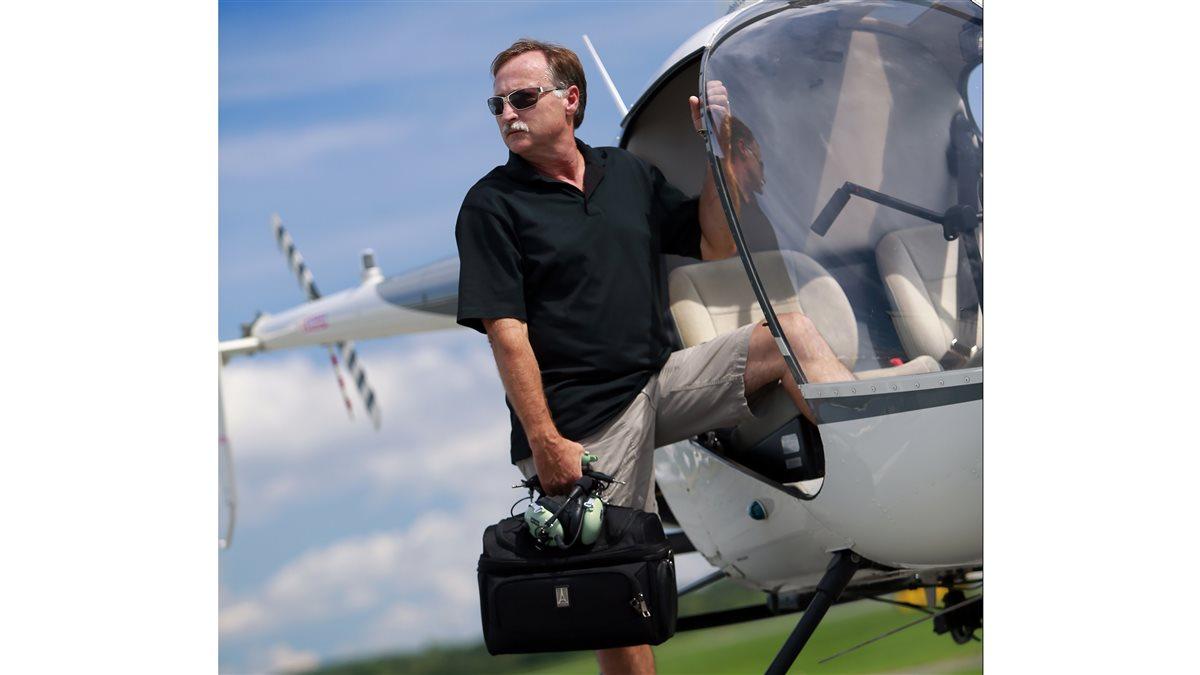 Neal Lanning, 54, has 5,000 hours of helicopter time in everything from a small Robinson to a Sikorsky S–76. That’s just the rotorcraft time out of his total 16,000 hours, some of that in the cockpit of a Gulfstream jet. He operates a flight school and is a flight examiner who needs to take notes and consult the airman certification standards frequently.

Providing navigation is an iPad Mini. It also runs ForeFlight Pro, and he won’t fly without it—even in the Gulfstream business jet. It keeps him up on weather during the day as well. You’ll always find a charging stick in his flight bag to extend battery life for his phone and iPad.

His David Clark H10-40 headset has two cords with different plugs and can be used for fixed-wing aircraft or helicopters. As you might imagine, both hands are busy “all the time” in a helicopter with no autopilot, so a kneeboard is a necessity for a helicopter pilot, he said.

More gear for the helicopter pilot 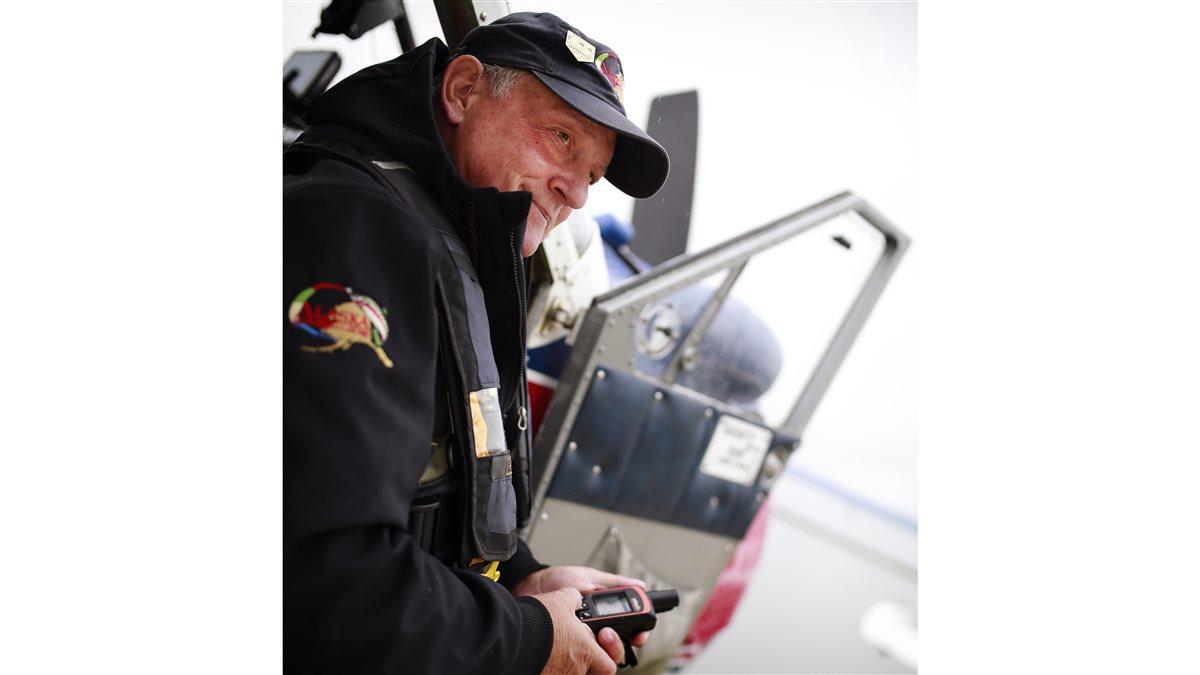 “When weather changes, there’s a mechanical issue, or a guide wants to know the fishing conditions on a portion of the river, we can share that information instantly,” he said. “We’ve got a DeLorme in all three of our airplanes, and we use them every day.”

When a Beaver’s engine blew a cylinder last year and the pilot made a precautionary landing on a remote lake, he notified Strickler via satellite message as soon as the airplane was safely down and secured. Strickler sent another airplane there to pick up the passengers, and he alerted a mechanic who flew to the lake and replaced the cylinder.

“That wouldn’t have been possible without the DeLorme. It’s as essential to our operation as GPS.”

Strickler carries a survival kit, but he keeps in mind that if a floatplane flips or sinks, he may not be able to retrieve it. He keeps the DeLorme in a survival vest. The vest also contains a drinking filter, space blanket, multitool, fire starter, waterproof matches, and batteries.

More gear for the bush pilot 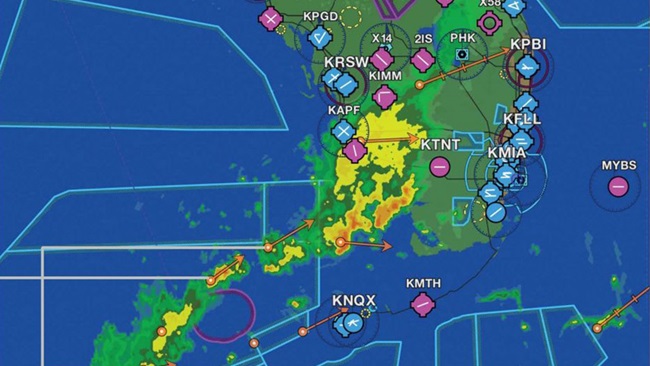