Aviation, automobile, and motorcycle aficionados will have a chance to get up close and personal with historic aircraft, custom and classic autos, and unique motorcycles during the free Wings ‘n Wheels event at AOPA’s National Aviation Community Center in Frederick, Maryland, Oct. 22 from 10 a.m. to 2 p.m. A World War II-era transport aircraft, a 1930s roadster automobile, and a newly fabricated custom motorcycle will be among the star attractions. Dozens of airplanes, cars, and motorcycles, plus music, food trucks, and face painting will fill out the day’s entertainment in a family friendly environment. 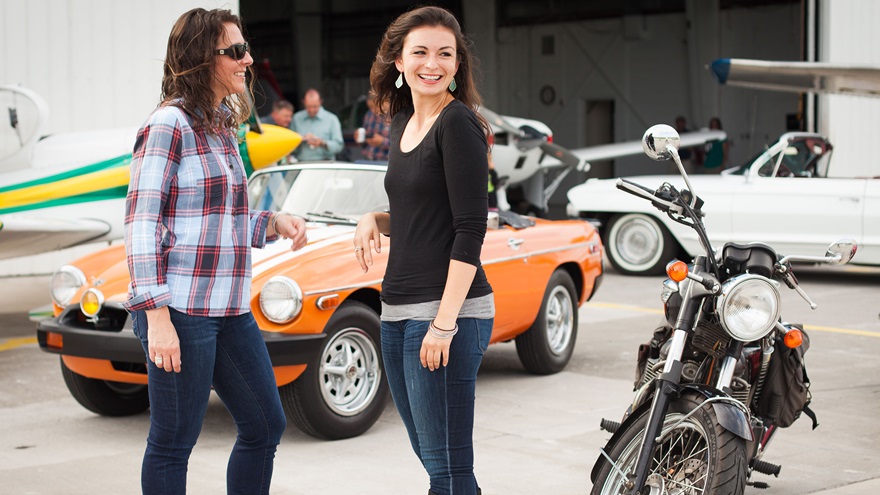 Aviation, automobile, and motorcycle aficionados are invited to the inaugural AOPA Wings 'n Wheels event Oct. 22 at Frederick Municipal Airport in Maryland. The family-friendly event is free and features aircraft, custom and classic cars and motorcycles; drawings for discovery flights; live entertainment; and food, fun, and camaraderie. Fly, drive, or ride to AOPA's National Aviation Community Center from 10 a.m. to 2 p.m. to join the party. Photo by Christopher Rose.

The event at Frederick Municipal Airport had humble beginnings as a motorcycle rally between friends, said Mike Woods, a Harley-Davidson Road King rider and the NACC event manager. “A few of us were talking about a ride and a place to flip a few burgers and then we said, ‘Hey, what if we added airplanes and what if we added cars?’”

Woods said that having the NACC was a wonderful asset and inviting the community to the airport was a logical next step. When someone volunteered a contact with the Clustered Spires British Car Club, “the event took on a life of its own.”

Tabitha May, a Pan American DC-3 recognized at the 2016 EAA AirVenture will be an attention-grabber in addition to an aerobatic Nanchang, a sporty Van's Aircraft RV-4, helicopters, Cessnas, Beechcrafts, and other aircraft.

John Hamilton, a classic car enthusiast who owns five vehicles built from the early 1960s to the 1980s, said he would “bring all of them,” including a pair of 1962 Cadillacs with their swoopy fins and chrome grills, plus a friend’s 1931 Model A Roadster from the Golden Age.

On the Roadster, “everything is manual—the brakes, steering, and transmission,” said Hamilton, AOPA vice president of information technology. “With a maximum speed of 40 mph and tires not very wide, it makes driving a little scary on today’s roads. You play the Ooga horn and and it’s fun to watch people turn their heads. Kids today have never seen a car like this and have no idea what it is.”

Muscle cars including a 1965 Plymouth Barracuda and its modern day Dodge Viper cousin will share parking spots with scores of British models including classic MG, Triumph, Austin, and Morgan models.

“She’s made out of all junk parts and is absolutely the most incredible bike you will ever see,” Jackman said. “The 96-cubic-inch engine will blow just about anything out there away.” The salvage-special’s only new parts are its mirrors, exhaust, carburetor, and seat. “It will floor you,” she promised.

Plans were being finalized for the $2 Pistol sporting an S&S engine and painted like a Mexican blanket with metal flake. “It’s super cool,” she said.

Jackman Custom Cycles has a loyal following in the motorcycle world, and even fuel tanks are hand crafted. “What’s so special about the way Jerry does stuff on the bikes is that it’s rare if he buys a stock anything,” she said.

Participants can sign up for drawings with prizes that include free introductory flights in a helicopter or an airplane. Aviation businesses including Frederick Flight Center, Bravo Flight Training, Advanced Helicopters, and Piedmont Airlines will attend the inaugural event.

“You name it and we’ve got some nice stuff coming,” said Woods. “It’s going to be fun and it’s free.”