Get the app Get the app
AOPA Members DO more LEARN more SAVE more - Get MORE out of being a pilot - CLICK HERE
News & Media Florida flight school, Maryland CFI win excellence awards

A Florida flight training business that keeps its customers on course toward their goals, and a Maryland flight instructor who has gone out on her own for the love of instructing have been voted winners of AOPA’s 2016 Flight Training Excellence Awards. 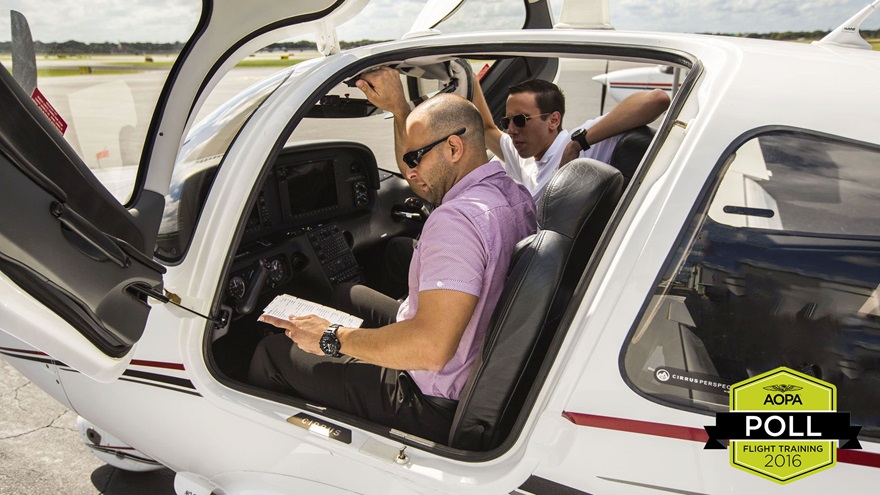 AOPA announced the flight schools and instructors who were dubbed the cream of the crop during Redbird Flight Simulation's annual Migration conference in San Marcos, Texas, Oct. 25. The 2016 AOPA Flight Training Poll gave aviators the opportunity to provide feedback about their recent flight training experience, as a way to "stand up and sound off for the future of flight training." Flight Training Professionals (instructor and student pictured here) was selected as the Best Flight School. Photo courtesy of Ed Comisky.
Flight Training Professionals, based at Executive Airport in Orlando, Florida, and Brenda Tibbs, an experienced instructor who launched a new venture, Bravo Flight Training, in Frederick, Maryland, received their awards Oct. 25 at the Redbird Migration Flight Training Conference in San Marcos, Texas.

The Student’s Choice Award was given to Paragon Flight of Fort Myers, Florida, as the flight school that received the highest number of positive nominations. This year’s President’s Choice Award winner was Take Flight Aviation of Montgomery, New York, selected by AOPA President Mark Baker for significant and innovative contributions to the flight training community. 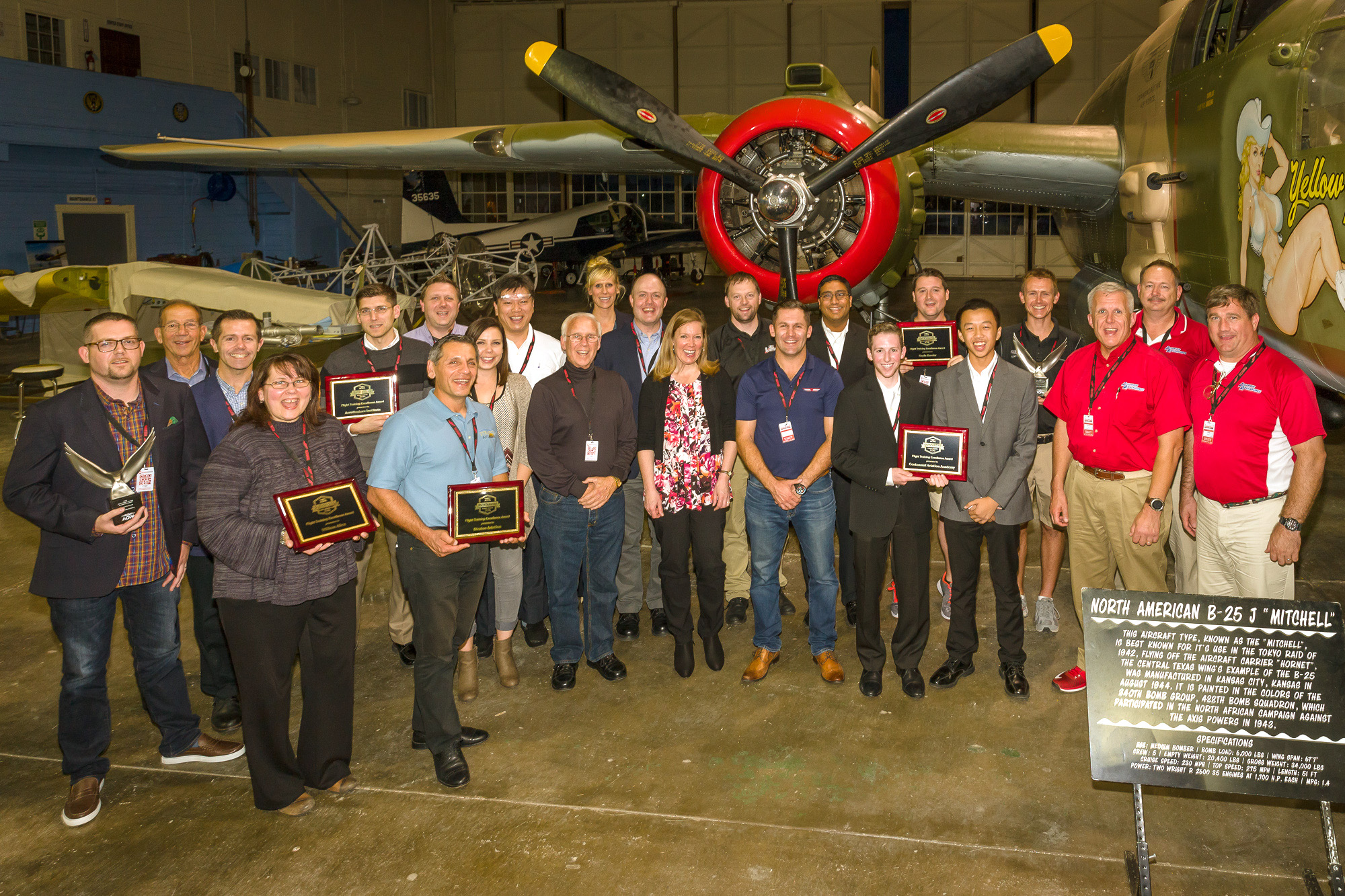 The 2016 AOPA Flight Training Poll gave aviators the opportunity to provide feedback about their recent flight training experience, as a way to “stand up and sound off for the future of flight training.” Voting took place between May 23 and Aug. 22, with 11,356 ballots being cast, with a total of 789 flight schools and 1,515 flight instructors receiving votes.

The Flight Training Excellence Awards, now in its fifth year, is one of the initiatives under You Can Fly, AOPA’s umbrella program to make flying more accessible and affordable by pursuing a range of targeted approaches to building the pilot community from supporting flying clubs and encouraging best practices in flight training to getting rusty pilots back in the air and helping high school students discover the potential for careers in aviation.

The Flight Training Poll measured the performance of flight training providers based on educational quality, customer focus, community, and information sharing—factors that combine to create an optimal flight training experience, according to a study commissioned by AOPA in 2010.

It’s what Ed Comisky emphasizes when he talks about his Orlando business, Flight Training Professionals, and the increasing vote of confidence it has received from clients.

“We made the honor roll three years in a row. Happy customers boosted us to that level,” he said. 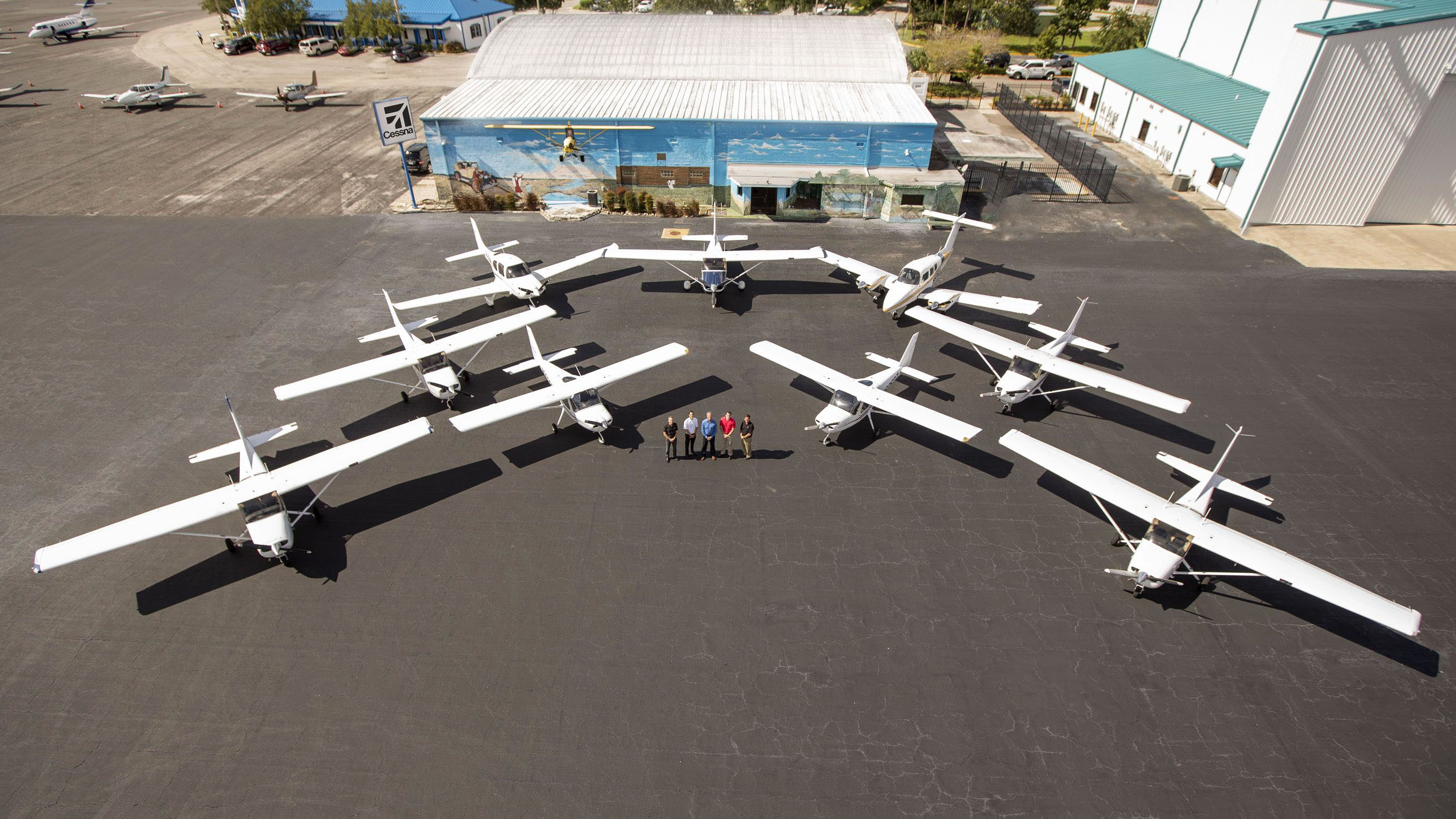 The school, a Cessna Pilot Center, has a fleet of eight aircraft, and will be adding another—as well as another CFI—soon. The school serves approximately 50 flight training clients, most of whom live and work in Orlando and range from “a couple of 16-year-olds getting ready to solo” to a 63-year-old student working toward a sport pilot certificate, “and everything in between.”

Comisky, who’s been in the business of managing flight schools large and small for 21 years, said he believes that frequent flights, facilitated by advance scheduling, create student success. Flight Training Professionals is open 12 hours a day, seven days a week, “whatever fits their schedule.”

Another focus is fitting the training to the pilot’s ultimate goals. That includes an appropriate level of cockpit technology. If a pilot plans to fly with certain devices or software after earning a pilot certificate, Flight Training Professionals integrates them into the training regimen as soon as the basics have been mastered, Comisky said.

Habit patterns stressing safety are emphasized—and the company’s policy for the filing and activating of VFR flight plans underlines that philosophy, Comisky said. He added that that some of the reticence some pilots feel about using VFR flight plans is dissipated by electronic capability to manage or close active flight plans—another feather in the cap of technology.

Ask Comisky to expand on what helps a customer reach a training goal and he may hand you a copy of the Jan. 13, 2015, AOPA Online article, “The nine habits of successful students,” by AOPA Pilot and Flight Training magazines’ managing editor, Sarah Deener.

Comisky said he likes the piece so much he distributes copies of the work to customers, “because this is the advice we’d give.”

National Election Day may still be two weeks away, but in Frederick, Maryland, the voters have spoken—and the winner is Brenda Tibbs, named Best Flight Instructor in the 2016 Flight Training Poll. 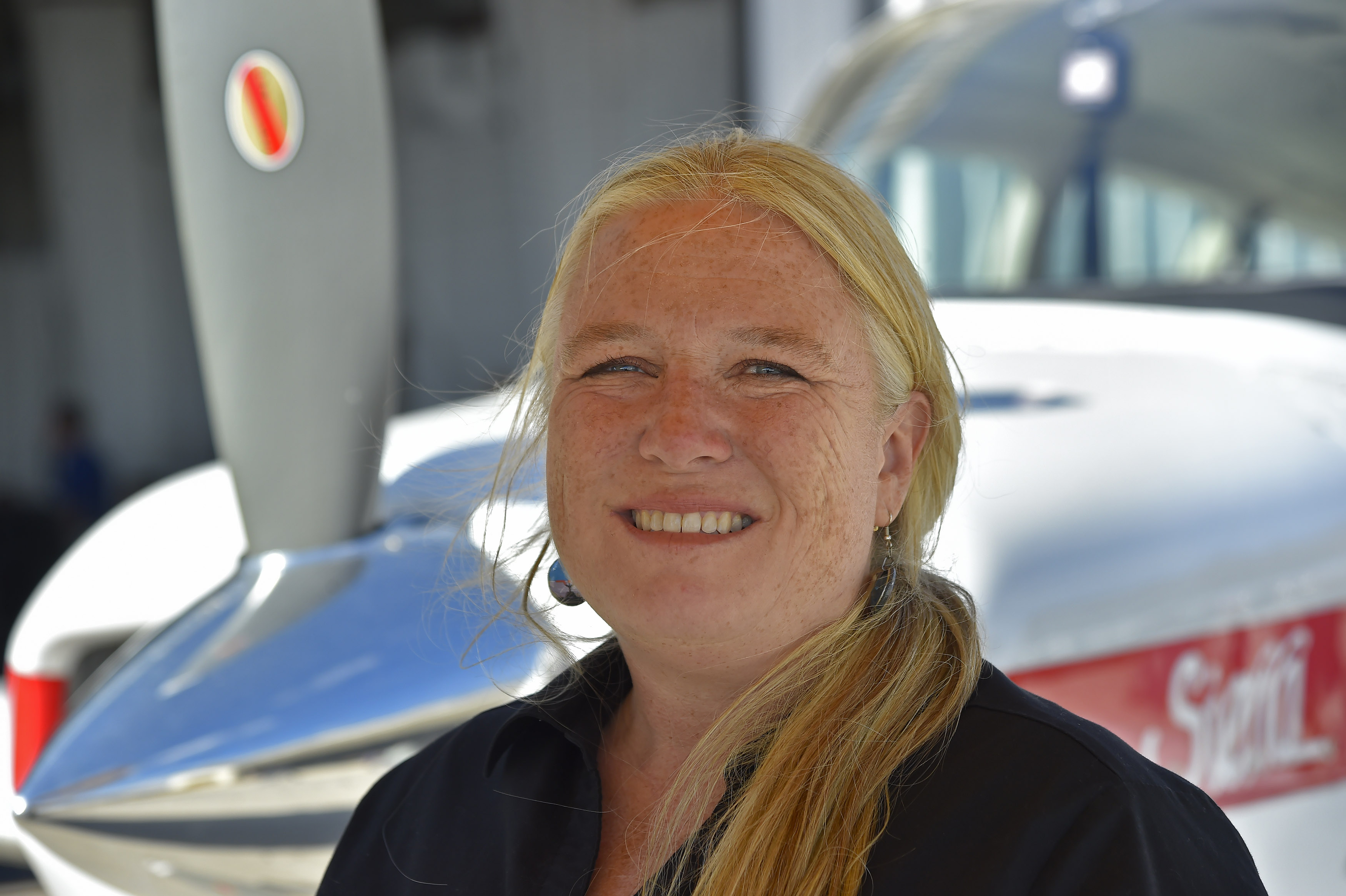 The good news doesn’t stop there for the 2,000-hour CFI who just two months ago stepped out on her own to found Bravo Flight Training after six years as an instructor for an established FBO. On the day she learned about her electoral success, Tibbs also received final municipal approval to run her flight school at the airport, ratifying a process in the works since summer.

Like her counterpart in Orlando, Tibbs will soon add an aircraft to her fleet that now consists of a Cessna 150 and a Cessna 172. The new arrival, a Piper Arrow, will give her students access to an aircraft with retractable landing gear and a constant-speed prop for advanced training.

Tibbs said instructing for her last employer, and during previous tenure working at AOPA—where she served members in the Pilot Information Center and later as a flying club specialist—has been an “awesome” experience.

But she felt something was missing from pilot training—something she could zero in on in her new venture: a sense of community.

“Everyone was coming, taking lessons and leaving, and not connecting,” she said.

Tibbs knew from working on member service programs at AOPA that retaining pilots as active members of the general aviation community is a high priority, because a sense of community is one reason people love to fly.

So in addition to her flight schedule and working out details of getting the new flight school up and running, Tibbs organizes regular activities that benefit her airport’s community such as monthly gatherings that spotlight educational topics in a social atmosphere.

A recent get-together featured two designated pilot examiners who discussed their roles and gave attendees a chance to ask questions. An upcoming session will bring pilots and air traffic controllers together.

Carving out a niche is a way to give any business an edge, and Tibbs has found an important role as an instructor of the pilots of the future. It’s a great fit for the mother of a teen and a fitting follow-on to her work with Frederick Aviation Explorers, a local youth development program.

It also has this advantage: “That’s what I love to do,” she said.

Take the poll, enter the sweepstakes 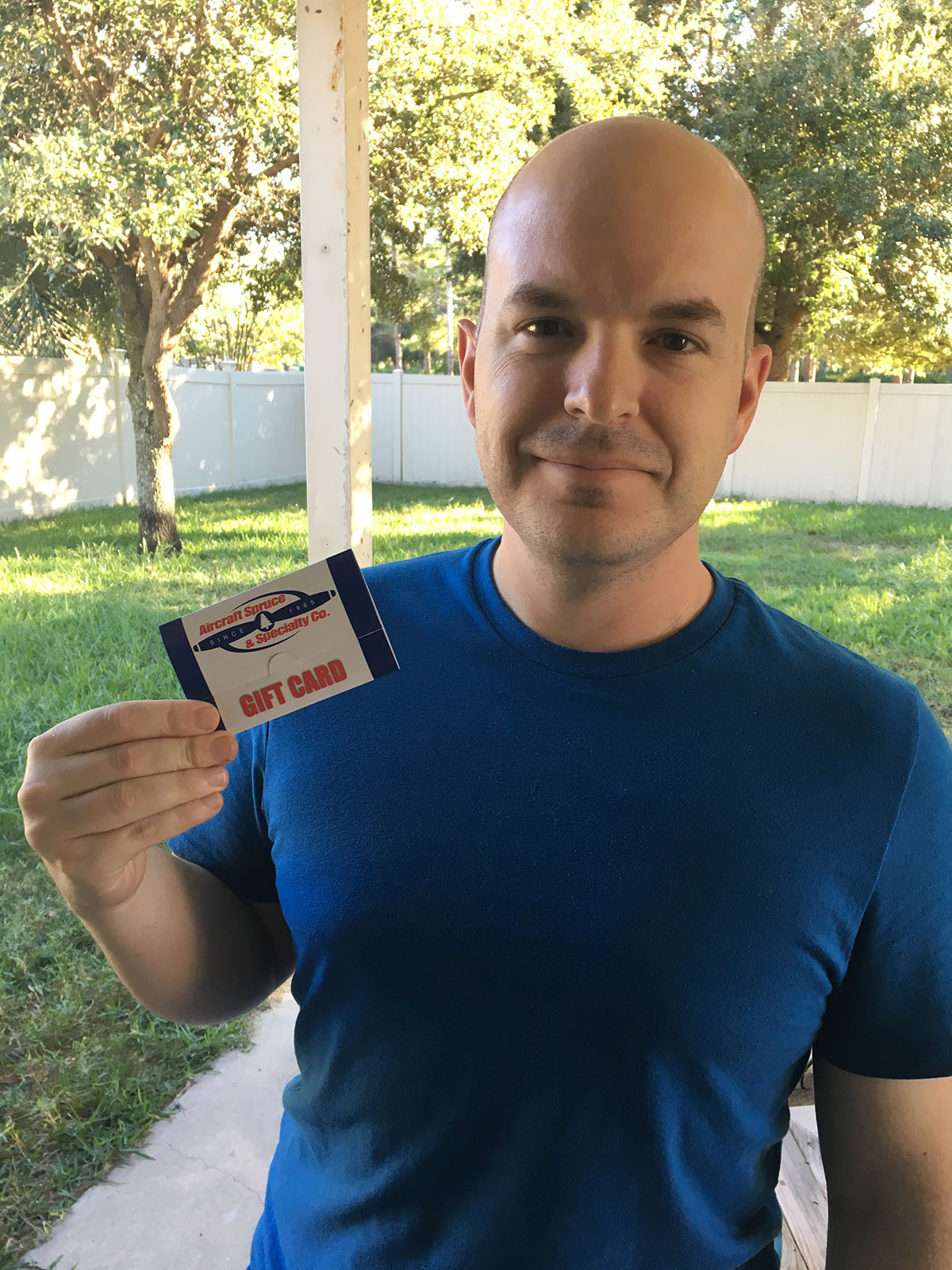 The best way to find out which flight schools and certificated flight instructors do a great job helping people achieve their dream of flight is to get the information directly from the students themselves.

The trainees provide the feedback about their flight training experiences by participating in the AOPA Flight Training Poll. The winning flight school and winning CFI each receives a Flight Training Excellence Award

Each student who participates in the poll also becomes eligible to enter the Flight Training Poll Sweepstakes and win prizes made available by generous donations from Jeppesen, Sporty’s Pilot Shop, Aircraft Spruce, and PilotWorkshops.

Service member Benjamin Miller won a gift card from Aircraft Spruce after he participated in the 2016 Flight Training Poll to recognize the Jacksonville, Florida, flight school that helped bring his “lifelong passion” for flying to life.

“For the past 18 years, I have been serving in the U.S. Navy and have been fortunate to fly as a crew member,” he wrote in an email. “In 2014, I stumbled on a Sunrise Aviation in Jacksonville that helped me achieve my dream of moving from the back of the plane to the front. Since then, they have helped me earn my Private and Instrument Certificates. I hope to continue toward my commercial license, Tailwheel endorsement, and ASES in the future. Thank you again for this!”