Get the app Get the app
Already a member? Please login below for an enhanced experience. Not a member? Join today
News & Media Flying Carpet: Car shuttle

Smoky air filled my cockpit as I navigated the final miles home. Thankfully the odor emanated from outside the airplane, but it was stressful and unpleasant all the same. Still, today had been a delightful and practical Flying Carpet mission. 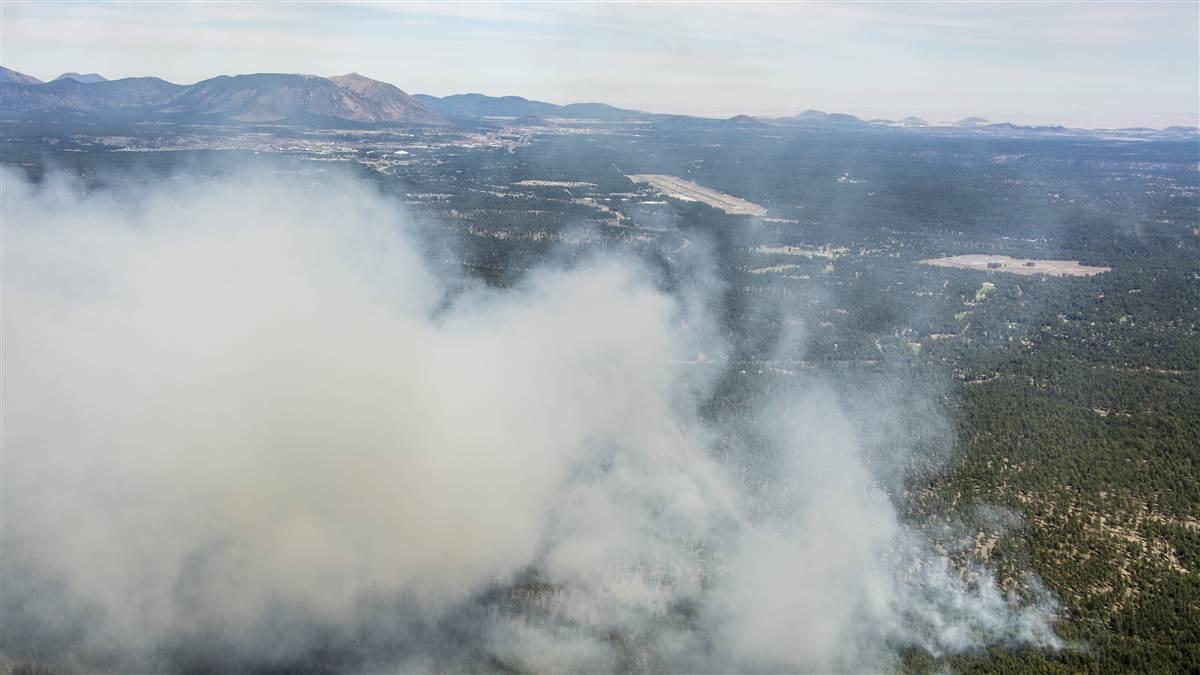 Flagstaff Pulliam Airport materializes from behind a wall of forest-fire smoke.

Our son, Austin, has worked overseas the past few years, and he had stored his car in California. While visiting Flagstaff for a few days, he’d asked if we could retrieve the car for his family’s pending return to the states. The pickup location was just a mile from San Diego’s Gillespie Airport, and we’d enjoy some family piloting in the process.

After shuffling our planned schedule because of weather, we launched for Gillespie on the one good flying day during Austin’s brief visit. Jean joined us to share driving duties backto Flagstaff.

Even the nicest flying days offer surprises. Thirty minutes after takeoff, Phoenix Approach vectored us around Embry-Riddle Aeronautical University traffic holding at the Drake VOR near Prescott. Then Albuquerque Center radioed, asking about a fire as we crossed the Colorado River. We saw no flames, but low smoke near Lake Havasu billowed westward over the Mojave Desert. After crossing the Salton Sea and topping the 6,000-foot Laguna Mountains, we descended for Gillespie Field.

We’d enjoyed a smooth ride all morning at 8,500 feet, boosted by 10- to 15-knot tailwinds. Unfortunately, there’s always a price to pay for easterly Santa Ana winds approaching coastal California. Descending through 7,500 feet, we were jolted without warning by near-severe turbulence. I should have anticipated that even mild easterly winds would result in big bumps downwind of the Lagunas. (“Caution,” reads the sectional chart. “Extreme turbulence and severe up- and downdrafts during high wind conditions.”)

“Do we need to slow down?” asked Austin, a jet pilot. I was already throttling back for maneuvering speed, roughly midway between stall and maximum structural cruising speeds, to distance us from stalling or from bending anything.

Jarring bumps continued for a seemingly eternal 10 minutes. I dared not descend lower downwind of ridges in such conditions, and as a result ended up approaching 338-foot-elevation Gillespie Airport at 6,000 feet. The tower wouldn’t approve circling on final to descend, so I brushed off my glider-flying skills and slipped us dramatically but uneventfully to landing. I was glad to be traveling with seasoned pilots today, rather than novice passengers.

The folks at Jet Air delivered my passengers to Austin’s car. Although started monthly, the vehicle had not been driven for several years, so I worried more about Austin and Jean’s eight-hour drive home than my own two-and-a-half-hour flight.

Departing, I hoped to climb immediately to 9,500 feet to surmount the turbulence. Gillespie lies under San Diego’s Class Bravo airspace, so I requested an early frequency change after takeoff, and when approved asked Socal Departure for an expedited climb. The controller immediately cleared me up through Bravo airspace. If necessary to avoid downdrafts, I planned to turn westward and climb to a safe altitude before proceeding on course.

Outbound, I again endured bumps, but this time I topped the worst of it before reaching the ridge. In any case, it was more a “ballooning” feeling at my 80-knot climb speed versus the harsh bumps of our previous 150-knot descent.

Smoke from the wildfire near Lake Havasu now shrouded the Mojave from the Salton Sea east. Despite clear skies above, I could see few details of the desert below. More concerning, the top of the smoke had risen significantly since our previous leg, and I worried about entering it. Fortunately, that proved no problem.

The smoke ended at the Colorado River, but the San Francisco Peaks didn’t appear as expected when 100 miles from home. Later I realized that more smoke, from controlled burns west of Flagstaff, obscured the route.

Slogging through smoke is tough on both human lungs and instrument gyros. Approaching Flagstaff, I attempted to circumnavigate the fires to the north. Still, flight visibility declined and the smell of smoke, while tolerable for the moment, filled my cockpit. I could hardly see the forest below, much less anything ahead. You wouldn’t find me here without an instrument rating, terrain mapping, and local-area knowledge—there’s a 12,000-foot peak nearby, and 8,500-foot Woody Ridge lies just west of the airport.

I still couldn’t see the runway when radioing Flagstaff Tower 10 miles out. Yes, easterly winds should blow the smoke away from the airport, but this was nerve-wracking. I asked if smoke affected the field.

“No, you should break out over Woody Ridge,” said the controller. Sure enough, I burst into mostly clear skies 2,200 feet above the traffic pattern. For the second time today, I slipped to landing. I’d just shut down the engine, five flight hours after this morning’s takeoff, when Austin and Jean reported driving past Yuma. I had dinner waiting when they arrived at 8 p.m.

We were all bone-tired that night, and tumbled into bed early. However, when the wind calmed after dark, smoke from the nearby fire smothered our house and disturbed our sleep, despite all efforts to seal it out. Not until rain cleared the air the following night did we finally fully escape the smoke.

Greg Brown is an aviation author, photographer, and former National Flight Instructor of the Year. Visit his website (www.gregbrownflyingcarpet.com).