A motor vehicle crash that robbed Japanese-born Shinji Maeda of half his eyesight at age 18 nearly extinguished his dream of becoming a professional pilot. Now 37, Maeda was emotional about the accident as he recalled how he overcame the physical and mental trauma of a crushed optic nerve to become a commercial pilot and inspirational speaker. 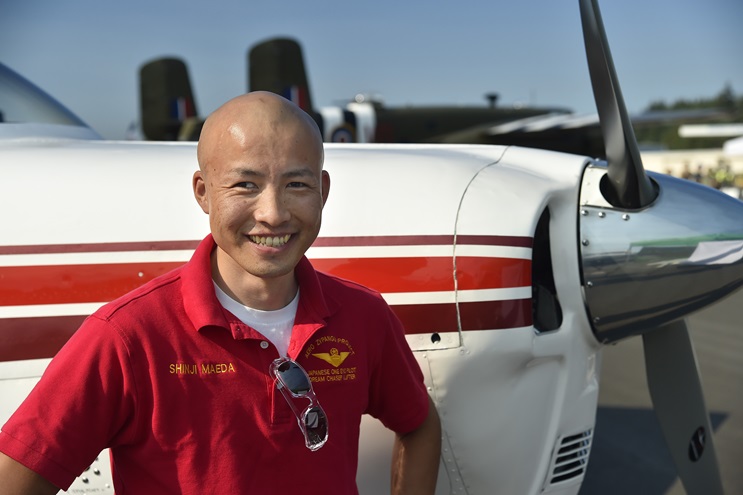 Inspirational speaker and pilot Shinji Maeda, who lost half his eyesight after a motor vehicle crash, visits the AOPA Fly-In at Bremerton, Washington. Photo by David Tulis.

Perched on a tractor working the fields of his family’s farm in Hokkaido one day, a teenaged Maeda looked up and saw an airplane fly overhead. That’s when he decided the sky would be his home and a cockpit his office. Maeda’s mother went to the local library to search for a special aviation high school so Maeda could begin his aviation studies. He thrived in the aviation-specific high school and was a quick, witty student.

However, Maeda’s plans were threatened when a car ran over him, knocking him to the pavement. “Doctors gave my family a 50/50 chance of survival” because the crash caused a severe skull fracture, brain swelling, and other damage.

Maeda’s parents didn’t have much hope for their second-born child, but “I survived somehow. Doctors can’t quite say how I did it,” Maeda told AOPA during the Bremerton Fly-In in Washington.

“The reason I’m blind is when the bone collapsed in my head, it cut off my optic nerve,” he said. Maeda lost vision in his right eye; “In Japan I was considered handicapped. That meant I would not get a job or have a career.”

Maeda took the news very hard. Three months of rehabilitation in the hospital left the teenager with plenty of time to think about his crushed aviation plans.

Adding to his devastation was the knowledge that without a profession he would be a burden to his parents and to society. It was almost too much to bear, Maeda said.

With his future dashed, he knew he could never occupy the cockpit as a professional pilot. “I was about to commit suicide when my father said to me, ‘Shinji, why not go to the United States and study aviation?’” With several years of aviation study already under Maeda’s belt, his father thought an aeronautical career might still be possible and he wanted to reignite his son’s passion.

He hid behind the injury, though, walking with his head down, burying himself in books, and studying hard to make good grades. Wallowing in embarrassment and self-pity, Maeda realized the vehicle crash cost him more than his eyesight.

“I was hiding what happened to me, and I had no clue about aviation—about flying—ever again,” he said. Surrounded by Embry-Riddle’s aviation culture, Maeda “felt like an outsider” because he couldn’t fly.

Deep down he knew that something was missing because the sky still tugged at him. 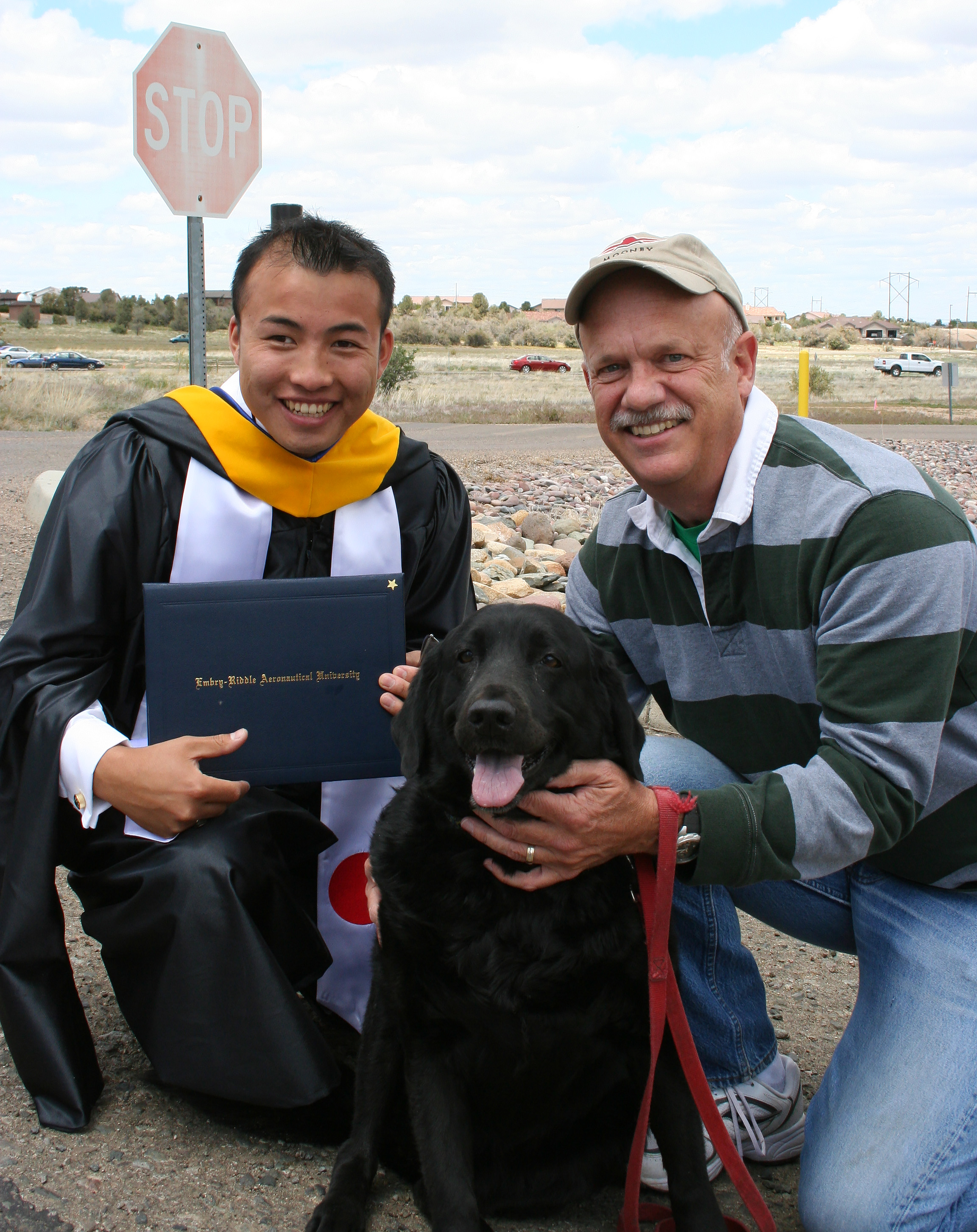 Safety professor Ed Wischmeyer noticed the dark cloud hanging over Maeda. When the class discussed vehicle crashworthiness one day, memories flooded Maeda. He shared his disappointment that “he could never be a pilot.” Instead of dropping the subject, Wischmeyer took it as a challenge. He demanded Maeda meet him for a field trip—although he didn’t announce the destination.

Together they rode to the Arizona airport and then took a Cessna 182 up for a flight. Maeda said he was caught completely off guard by the experience. After a few minutes with Maeda behind the controls, Wischmeyer noticed a change in his student’s demeanor.

“Ed said, ‘Guess what, Shinji? You are a pilot. You’ve loved aviation since you were 15—and that’s called a career. That’s what’s important in life.’”

Maeda’s flight in the Cessna encouraged him to pursue his original path, and Wischmeyer’s mentorship helped keep the young man on track.

Maeda had to tackle one more obstacle to make sure he could follow his original dream. He traveled home to Japan and consulted with his parents.

“When I told my father that I was certain I needed to become a pilot, he got very angry with me, and I didn’t know what to make of it,” Maeda confided, as tears welled up in his eyes. “My father was furious. Then he said, ‘Son, why are you still here wasting our time talking to me and to your mother? You should be back at school studying’ to become a pilot.”

At that moment Maeda knew he would succeed, and he made a pact with himself. “I realized I needed to encourage the next generation of pilots” to inspire them to fulfill their desires and goals, no matter how difficult.

With Wischmeyer’s help and his parents’ blessing, Maeda navigated the red tape, regulations, and training to become a certificated single-engine land pilot. An FAA medical statement of demonstrated ability in 2005 opened the door for Maeda’s return to the sky. He then earned his multiengine certificate and instrument ratings.

Renewed enthusiasm led Maeda to recently become a commercial pilot, something he said he never could have accomplished in his home country.

Without his college professor prodding him on, Maeda said he had “pretty much just shut down” his lifelong dream of becoming a professional aviator and given up on his passion. Now he doesn’t want to see that attitude in anybody.

“When I meet with students these days I tell them, ‘Instead of Googling it, just do it.’” 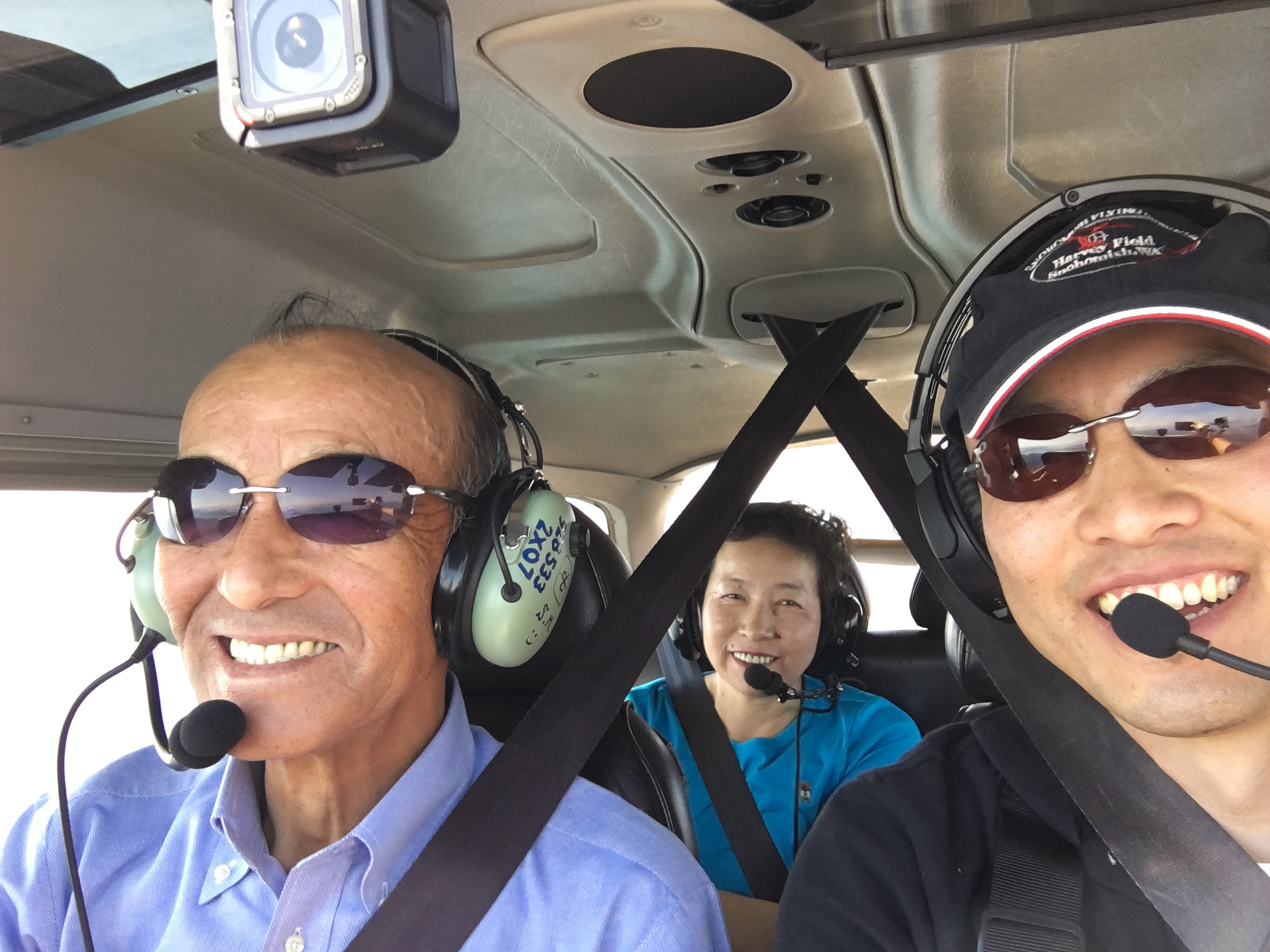 The Seattle-based Maeda calls his inspirational message the Aero Zypangu Project (air Japan), and he shares his personal story as a self-described "one-eyed pilot" during motivational speeches to youth groups, international students, and communities. Maeda said he motivates future aviators by demonstrating how they can follow their passion even if they are physically challenged and urges them to “achieve the unachievable.”

He listed two principles to help lift people to their highest potential. “Number one, appreciate your parents. And number two, do whatever you have to do to follow your dreams.”

Maeda’s future plans include marrying his fiancee Makiko Oshima, earning an instructor’s certificate, and then raising a family so he may one day teach his own children to fly.

“That’s the beauty of life,” said Maeda. “Everybody has an opportunity and everyone has a chance. As long as you have passion you can follow your dreams.”