Get the app Get the app
AOPA Members DO more LEARN more SAVE more - Get MORE out of being a pilot - CLICK HERE
News & Media Debrief: Hubie Tolson

Hubie Tolson’s cellphone is rarely quiet. It could be someone calling about commercial real estate, or about one of the airshows at which he performs every year, or even someone hiring him to fly 25 hours off a newly restored Windecker Eagle to meet FAA flight testing requirements. Believe it or not, Tolson’s life has slowed down a little from the days when he was training as an aerobatic pilot five days a week, two or three times a day. He made the United States Aerobatic Team in 2003 and 2007, and finished fifth and seventh in the four-minute freestyle. He introduced Russian aerobatic champion Sergei Boriak to American life in New Bern, North Carolina. Boriak later became the coach of the United States team. 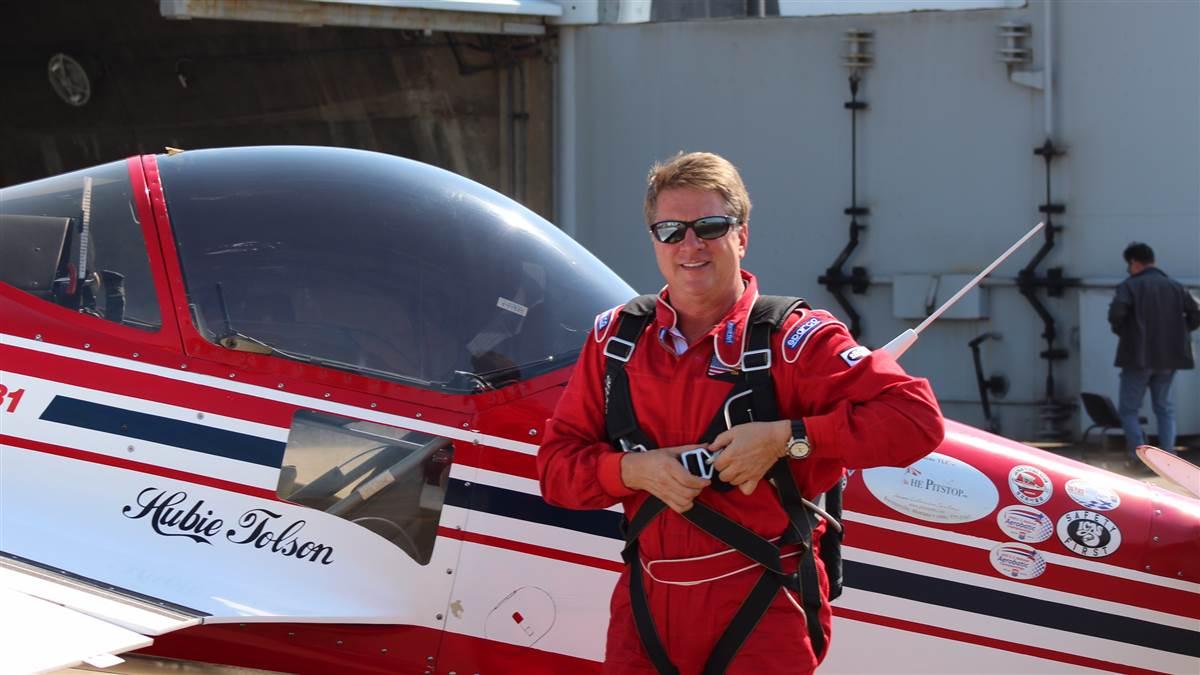 Tolson plans to perform at airshows in China, South Korea, and Dubai this year.

GETTING STARTED…I took a $20 ride at the airport as a high school junior. The instructor who took me for a ride did a loop and a roll, and I was smitten. I trained on a 1,400-foot strip that had a power line across the middle of it in Bayboro, North Carolina. It was a crop duster’s strip.

EARLY CHALLENGES…I had the typical money challenges of a 16-year-old who had no money. I washed airplanes and pumped gas as a line boy at the FBO in exchange for flying time. Just picking up the landings was something I never forgot. My instructor had me fly a foot off the ground for the entire length of a 5,000- or 6,000-foot runway a few times to burn in the sight picture. I got it done and soloed in December 1974 in a Piper PA–12 [Super Cruiser], as I recall.

HARDEST LESSON TO LEARN…Early on it was trying to get the hand-eye coordination thing right. I think the most important thing I learned [later] was taught by some of the old airshow greats—Bill Barber and those guys—about how to think about airshow flying with a minimized risk profile. They watched me almost kill myself and sat me down and said, ‘We gotta have a chat.’ That chat and their influence no doubt saved me from hurting myself.

FAVORITE AVIATION ACTIVITY…Aerobatics. It has been a part of my life—a life-changer for me—for 40 years, from competition to airshow work around the world. It’s been my whole adult life.

FAVORITE AIRPLANE…From a standpoint of beauty, the Beechcraft Staggerwing. From the standpoint of aerobatics, it’s a Sukhoi. I’ve had a Sukhoi for 25 years.

Get your written out of the way first. It trips everybody up. Fly shorter times frequently. Don’t wait. Go learn to fly.