Get the app Get the app
Get the latest news on coronavirus impacts on general aviation, including what AOPA is doing to protect GA, event cancellations, advice for pilots to protect themselves, and more. Read More
Already a member? Please login below for an enhanced experience. Not a member? Join today
News & Videos 'Fat Albert' Pilot: Capt. Katie Higgins

U.S. Marine Corps Capt. Katie Higgins may be the first female pilot of the Blue Angels, but she will tell you that she didn’t get there alone. “There have been women who paved this path,” she said. Women have served as “maintainers”—support staff—for the U.S. Navy’s precision flying team since 1969, and women pilots joined the Marine Corps ranks in the 1990s. 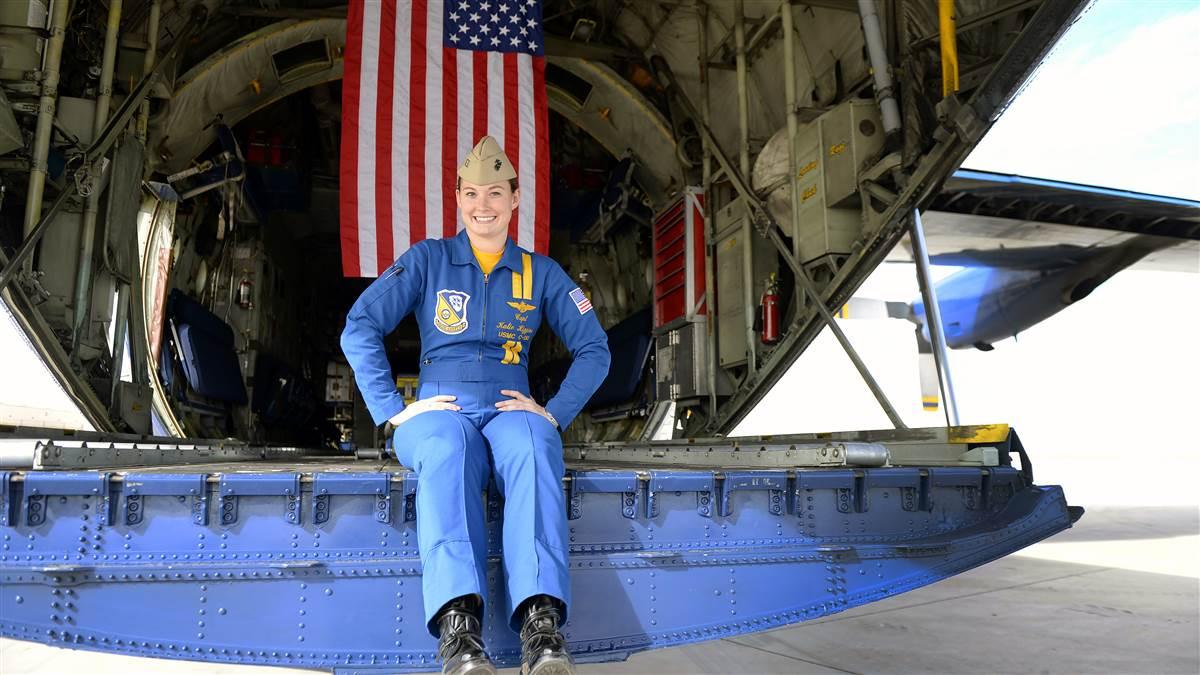 Who | Capt. Katie Higgins, C–130 pilot
Hours | Approximately 1,300
Favorite aircraft | The C–130, although she’s also fond of the T–44 Pegasus.
Extra | If she hadn’t chosen a military career, Higgins said she might have trained to be a firefighter or police officer—and also considered becoming a nun.

A 2008 graduate of the U.S. Naval Academy and a third-generation military pilot, Higgins was deployed to Afghanistan in 2013 in support of Marines and sailors on the ground—and later to Africa, where she participated in the evacuation of the U.S. Embassy in South Sudan. She said she has always been drawn to a life of service, thanks to the influence of her family—including her grandfathers, who served in the Army Air Corps, and her father, who flew F/A–18s for the U.S. Navy.

The Blue Angels chose Higgins in 2014 to join the five-person crew of Fat Albert, the team’s Lockheed C–130 Hercules that carries personnel and equipment. She first had to fulfill the team’s flying and service qualifications, submit a lengthy application, and attend some shows to meet the other members of the team. Finally, she had to conduct a formal interview with 16 people seated at a long mahogany table—perhaps the most intimidating part of the process, she said.

Fat Albert is a workhorse, and the aircraft also opens each airshow. Some 11 million spectators come to see the Blue Angels each year. Higgins loves demonstrating the C–130’s utility to airshow audiences. “People see it as a big airplane and they don’t see how versatile the aircraft is and how dynamic it is,” she said.

On June 2 the team lost one of its own when Marine Capt. Jeff Kuss’s F/A–18 Hornet crashed during airshow practice in Smyrna, Tennessee. “Capt. Jeff Kuss was an amazing husband, father, Marine, and aviator,” Higgins said. “His calm demeanor, concise communication skills, and superb leadership are just some of the characteristics that I will strive to emulate in my life moving forward. He will be forever missed, but I know I have a wingman with me every time I go flying,” she said.

Higgins will be reassigned at the end of the 2016 airshow season (team members cycle in and out over approximately three years). At this writing, she wasn’t sure what her next assignment will be. Higgins said she’s thankful to the men and women of the armed forces “keeping us safe every day, fighting ISIS so we have opportunities to fly airshows. There are places overseas where you can’t have large gatherings, and they give me the opportunity to do this job.”