Get the app Get the app
Get the latest news on coronavirus impacts on general aviation, including what AOPA is doing to protect GA, event cancellations, advice for pilots to protect themselves, and more. Read More
Already a member? Please login below for an enhanced experience. Not a member? Join today
News & Media Looks can be deceiving

A new generation of the popular Garmin G1000integrated flight deck looks much like the current edition. But looks can be deceiving. The new G1000 NXi has plenty that’s new going on behind the button-festooned face that pilots have come to know over the past dozen years—through some 16,000 installations. 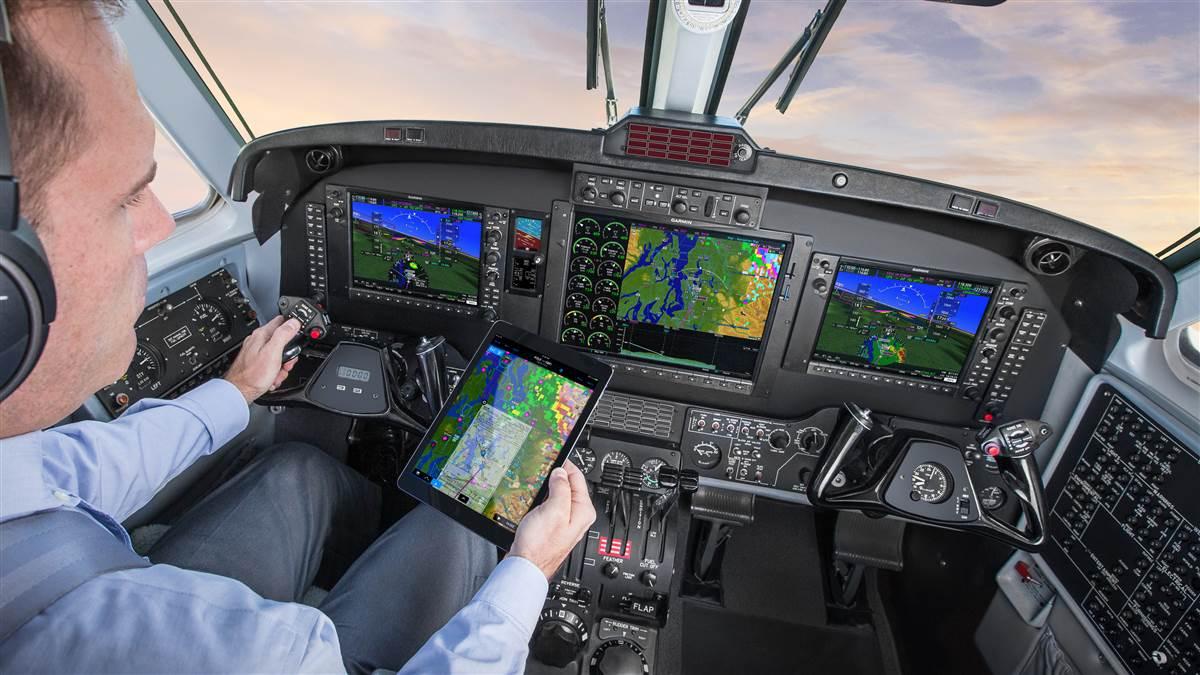 Garmin calls the NXi a “successor” to the G1000, which was introduced in 2004 and has since become nearly ubiquitous in new aircraft from light singles up through light jets. Additional variants—the G2000, G3000, and G5000, with different displays, including touch controllers—are used in a variety of airplanes from the Cessna TTx high-performance piston single to the world’s fastest civilian airplane, the Cessna Citation X+ business jet.

The G1000 NXi looks like its predecessor G1000 on purpose, according to Garmin, to simplify pilot transitions to the new system and to simplify manufacturers’ ability to install it in new airplanes—and for retrofits. Upgrading the aftermarket G1000 in a King Air, for example, will take only about a day, Garmin officials say. The displays will be swapped, including new processors, but the connectors are the same; the attitude and heading reference system (AHRS) and air data computer (ADC) will remain.

Installations into new airplanes at the factory or new aftermarket installs will receive a new generation of AHRS that combines the ADC, reducing weight and complexity. Garmin estimates that a new retrofit installation in a King Air with conventional instruments will save as much as 250 pounds.

According to Jessica Koss, Garmin director of media relations, the current generation of G1000 processors was maxed out, given the 15 major software upgrades the company has released since the original installations. Each upgrade brought new features and capabilities. In order to continue to be able to offer upgrades and features, new processors were needed, thus the G1000 NXi.

The new displays include LED backlighting, which improves brightness and allows for better dimming at night. The multifunction display offers more resolution. Garmin puts the new capability to work right out of the box with a host of new features not available on the G1000. Most noticeable is the HSI inset map, which provides an arc-shaped map inside the HSI compass rose. The map is configurable for any number of overlays, including terrain/obstacles, Nexrad, airborne radar, or traffic. 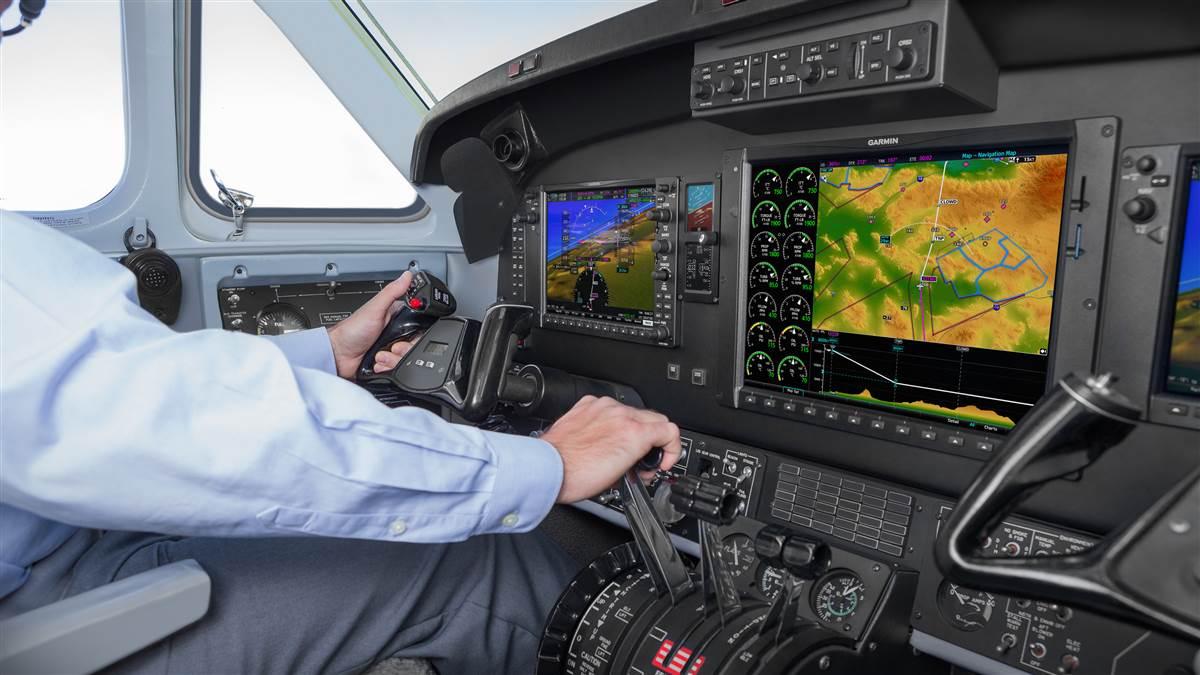 Other new features include Garmin SurfaceWatch, which issues visual and aural alerts as you approach a taxiway or runway while taxiing. You can input a runway for takeoff and landing. On takeoff, a blue runway outline and blue chevrons on the synthetic vision confirm you’re on the right strip of pavement. Similarly, on landing a blue outline confirms you’re touching down where you were planning to. The system knows runway lengths and will alert you if a strip is too short. A new vertical situation display across the bottom of the MFD depicts terrain that may affect your altitude.

The latest database upgrades include scanned sectional and IFR charts. Finally, visual approaches are available out of the database for nearly every runway end. The visual approach provides a straight-in approach to the runway with a 3-degree glidepath that can be coupled to the autopilot, providing the pilot with lateral and visual guidance—even when a normal instrument approach is not available. On visual approaches, the pilot must confirm his own terrain and obstacle clearance. But especially at night and at an unfamiliar airport, the guidance can greatly reduce pilot workload and improve situational awareness.

While the new features are welcome, there are also many subtle enhancements throughout the system. The displays light up within just a few seconds of receiving power, much faster than traditional G1000 displays. A com radio also is available almost immediately, so the pilot can receive ATIS and clearance while the system initializes. Green LEDs above each soft key help the pilot understand which features are active at any one time, much more clearly than the gray tabs on the original G1000.

Like SurfaceWatch, Garmin’s Flight Stream 510 is an option, but one that likely will be nearly standard. The 510 replaces a conventional SD data update card with a Wi-Fi card, allowing the pilot to transfer navigation database updates wirelessly from the Garmin Pilot flight planning app. The 510 will then distribute the data to all the displays. It also sends weather and traffic information back to the tablet and allows for two-way transfer of flight plans between the app and the panel.

Other enhancements include enlarged and more readable fonts; animations to show changes occurring—such as with radio frequency flip/flops; frequency identification to show what stations are tuned; much faster panning and zooming of the maps; and animated Sirius XM Nexrad images.

We had the chance to fly the G1000 NXi on a King Air 350. The flight included a demonstration of a coupled missed approach. While the ability to command a missed approach without disconnecting the autopilot is not new to the G1000, it is a recent software update and will be new to many who fly with the NXi. As we neared minimums to Runway 13 at Lancaster, Pennsylvania, Garmin demonstration pilot Scott Frye tapped the go-around button on the power levers. The flight director commanded an initial pitch up to 10 degrees and started the airplane upward. It was up to Frye to add power and retract the gear and flaps. A touch of the nav button had us headed out for the missed approach procedure. Had he not added power—or enough power—the Electronic Stability and Protection (ESP) system in the autopilot would have pitched the airplane over enough to keep it from stalling.

Conventionally, hitting the go-around button would disconnect the auto-
pilot and the pilot would be on his own to establish a climb at the appropriate attitude. Particularly in a single-pilot situation, the coupled approach is a significant safety enhancement.

Garmin expects aircraft manufacturers to announce their plans for installing the new system in new aircraft, and potential retrofit for more models, in the near future.

Thomas B. Haines is AOPA editor in chief.

Does the instructor make the difference?

Build a margin of safety

Real-world stalls don’t feel much like the ones in training.

Students practice the departure, or power-on, stall during flight training, but in a controlled, coordinated scenario at a high altitude. Unexpected stalls during takeoffs or go-arounds are sudden and frightening. At low altitude, even a brief loss of aircraft control may be unrecoverable. The AOPA Air Safety Institute’s Margins of Safety: Avoiding Power-On Stalls explains the differences between power-on stall training and real-world scenarios, the aerodynamics of stalls, and techniques pilots can use to prevent them.

If you had to bet, would you guess that training accidents triggered by unintended stalls are more or less survivable when an instructor is there to take the controls?

This turns out to be yet another situation in which intuition steers most of us wrong. During a recent analysis of stall accidents, the AOPA Air Safety Institute reviewed 250 that occurred on training flights over a 15-year period. Ninety-six accidents (38 percent) were fatal—more than five times the lethality of instructional accidents not involving stalls—but that risk wasn’t uniform across different types of training. Fatalities were twice as common in dual accidents as solo crashes (46 percent compared to 23), and certificated pilots were more likely to succumb than primary students. That margin was almost 2 to 1 during solo airwork and nearly 3 to 2 during dual instruction. Advanced dual—including transition training and flight reviews, as well as pursuit of additional ratings—was the only sector in which lethality exceeded 50 percent.

Of course, percentages can be slippery things, and safety statistics involve lots of moving parts. More than 40 percent of the accidents in primary training occurred on student solos, which typically don’t comprise anything like 40 percent of all training time, and student pilots are far more susceptible to low-altitude, low-energy lapses. More than half their solo stalls—but no fatalities—involved losses of control during attempted landings or go-arounds.

Established pilots (including CFIs) aren’t as prone to mistiming the flare or forgetting to retrim while adding power. That increases the prominence of more consequential impacts. Failures to recover from deliberate stalls are rare (although not unknown). Accidents most often proceed from exercises that draw attention away from airspeed, wing loading, and angle of attack.

That distraction is most urgent and the impulse toward aggressive maneuvering most intense while practicing emergency procedures, particularly simulated engine-outs. More than one-quarter of all fatal stalls in advanced dual instruction were the result of excessive pitch and bank excursions while trying to reach emergency landing spots—control inputs that caused spins at altitudes too low to allow recovery. Nearly half of the airplanes involved were twins, which accounted for just 13 percent of fatal training accidents overall—but are especially vulnerable to upset when low airspeed diminishes the control authority available to counter asymmetric thrust.