Get the app Get the app
Already a member? Please login below for an enhanced experience. Not a member? Join today
News & Videos GameBird GB1

Unlimited aerobatics with speed and range

The GameBird’s oversized control stick seems made for mischief. A sharp tug on the goose-neck column yanks me against the semi-reclined seat as the airplane vaults skyward. Symmetrical wings with distinctive swept-back tips pivot 90 degrees from level flight as the GB1 climbs like a missile into a cloudless blue sky.

The MT propeller digs into the cool, dense air, and the blades flatten and pull like a sled dog team as the airplane shifts into low gear. Finally, after going straight up for 10 seconds (and gaining about 2,000 feet), forward progress comes to a halt, and a kick of left rudder points the nose down at the hills of northwest Arkansas below. Full aileron deflection turns the autumnal colors into an orange/brown blur as the airplane rolls in excess of 400 degrees per second.

A series of aerobatic maneuvers which, in most airplanes, would quickly consume airspeed and altitude doesn’t slow the GB1, which actually gains altitude. The G meter registers plus six and minus two, a workout for me—but this airplane, built for plus or minus 10 Gs, is loafing.

“The pilot is always the weak link in this airplane,” says Philipp Steinbach, the wiry German aircraft designer, hardcore aerobatic pilot, and motivating force behind the GB1 and Game Composites, Ltd., the company founded to manufacture it. “The airplane’s much tougher than any human.”

This green and black model, serial number one, finished certification tests for European regulators in mid-2016. Both the aircraft and the Game Composites factory underwent FAA inspections in early 2017 for certification in the Acrobatic category—and the GB1 will become a showpiece for the durable, lightweight aerospace materials that Game Composites plans to produce for other clients.

The company plans to build up to eight GB1s in 2017 and 20 or more the following year. It will compete with Extra Aircraft in Germany and Aviat in Wyoming in the tiny, highly specialized market of certified aircraft capable of unlimited aerobatics. Steinbach says the GB1 can win at aerobatic competitions, and it has cross-country speed, range, and endurance that no other airplane in its category can match.

“You can go out there and dominate the skies, or you can cover some serious distance,” said Rob Holland, U.S. aerobatic champion and airshow performer, who has flown the GB1 (but doesn’t perform in it). “There’s nothing else quite like it.”

Each GB1 is assembled from 330 carbon fiber parts, and then the entire airframe is baked at more than 200 degrees Fahrenheit so all the components cure together. The wings are made in top and bottom halves, and the fuel tanks are sealed when the wings are bonded together. The fuselage is built in a jig with seats and torque tubes already in place.

Unlike other specialty aircraft, all GB1 parts are interchangeable between airframes. If a wing is damaged in a landing mishap, for example, it can be replaced in the field. With other models, a damaged wing requires the entire aircraft be sent away for repairs.

Game Composites’ 40,000-square-foot factory is nearing completion at the Bentonville Municipal Airport, but not everything in it is new. Steinbach drives a 12-year-old car and scavenges for second-hand shelving and office furniture on eBay. Wal-Mart heir Steuart Walton is chief executive of Game Composites and financially backing the GB1, but Steinbach takes pride in doing things on the cheap. When a bead-blasting quote comes in too high, Steinbach vows to do the job himself.

“I don’t mind getting my hands dirty,” said Steinbach, 42, an independent, mostly self-educated entrepreneur who left school at 16 and has founded three aviation companies. “And I refuse to be taken advantage of.”

Steinbach has designed and built three aircraft: the Impulse, an Experimental kit airplane; the Xtreme Air, an EASA-certified aerobat made in Germany; and now the GB1. He also worked as an employee at Extra Aircraft in Germany. “I’d never advise my career path to anyone,” he said. “I’ve been lucky. Things could have gone wrong so many times, and so many places along the way.”

Steinbach started flying gliders at age 14 and quickly moved to powered aircraft. He has competed in aerobatic competitions all over the world, and he lived in England for four years (with his two children, ages 6 and 12) before moving to Bentonville in 2016. He speaks with a light German accent and English phrases. (When he’s tired, he’s “bloody knackered,” and he signs off phone calls with “cheers.”)

He said the United States was an obvious manufacturing location because the general aviation market here is bigger than anywhere else, and because Bentonville is Walton’s hometown—and it’s becoming a center for flight training and sport flying. “We’ve got the right product, the right experience, and resources,” he said. “This will work.”

Game Composites plans to hire between 35 and 50 employees and produce more than 20 airplanes a year after 2018. Steinbach’s efficiency goal is to produce one airplane per employee per year, but he says he’s not in a hurry. “We need to grow slow,” he said. “Our product is extremely quality sensitive. We can never fail to keep the highest quality standards.”

The GB1’s curves set it apart from other aerobatic airplanes, which typically have hard edges that are easier for contest judges to see and grade. The GB1’s rakish wing tips and tail, as well as its tall canopy, are made for aesthetics.

The full-span ailerons are purposely devoid of spades—common accessories on aerobatic airplanes that provide an aerodynamic boost, like power steering. Steinbach says the GB1 has plenty of roll rate without spades, and they would needlessly add drag and complicate rigging.

The four-blade prop reduces noise and provides more ground clearance than two- or three-blade models. Wing tanks hold up to 28 gallons of avgas each, and a fuselage “acro” tank has room for an additional 25 gallons. On aerobatic flights, the wing tanks must be empty, with all the fuel in the acro tank. The baggage compartment holds 33 pounds.

There’s a fixed windshield and a side-hinged canopy that allows easy cockpit entry. The seat back is reclined 30 degrees, and the cockpit is exceptionally roomy. Seats are fixed and the rudder pedals adjust.

The airplane sits at a 9-degree deck angle, and visibility on the ground is surprisingly good for a tailwheel airplane. A ratchet on the padded lap belt secures the four-point harness. Engine start is normal for a fuel-injected engine, and an Electronics International MVP-50 engine monitor graphically displays temperatures and pressures as well as rpm and manifold pressure.

Takeoff acceleration is worthy of a drag racer. With elevator neutral, the tailwheel comes off the ground about three seconds into the takeoff roll, and left-turning tendency is easily counteracted by the authoritative rudder. The airplane comes off the pavement in about six seconds after a ground roll of about 800 feet. A 15-degree nose-up attitude results in a 110-knot climb with two aboard, and I level off a few hundred feet above pattern altitude to stay clear of overlying airspace.

The ailerons have a definite center and light breakout forces, and the tall, Sukhoi-style stick exaggerates even minor control inputs. The elevator is light, so I add full nose-down trim to give me something to pull against; rudder pressures are moderate.

In the practice area, I set power to 25 inches and 2,500 rpm, and go through a series of positive-G maneuvers (barrel roll, loop, half-Cuban, reverse half-Cuban, hammerhead, Immelmann, spin) that highlight the airplane’s grace, obedience, and control harmony. Then I hand the controls over to Steinbach, who reveals its aggression.

“Watch your head,” he warns, before a jarring set of full-deflection point rolls, square corners, and snap rolls that send my hat and sunglasses to opposite corners of the cockpit.

Returning to the airport, Steinbach recommends an approach speed of 85 knots. A curving approach keeps the runway in sight, and the airplane responds instantly to pitch and power changes. I carry a smidge of power into ground effect and pitch for a three-point attitude, but I add too much back-pressure. The nose comes up and the airplane balloons, so I neutralize the elevator and let the airplane settle.

We touch down at about 70 KIAS in a three-point attitude and the airplane rolls out smoothly with almost no rudder input and light braking.

The GB1 is capable, versatile, and visually appealing with the flexibility to accommodate many personal tastes. It can be graceful and smooth; forceful and rough; or it can span time zones traveling in a straight line. All the while, the GB1 conveys an exacting sense of precision and ergonomic thoughtfulness in every aspect of the way it looks, feels, and flies. The GB1 can take you where you want to go, any way you want to get there. 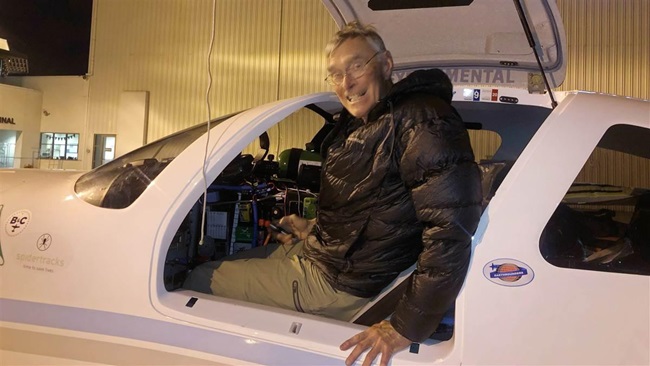 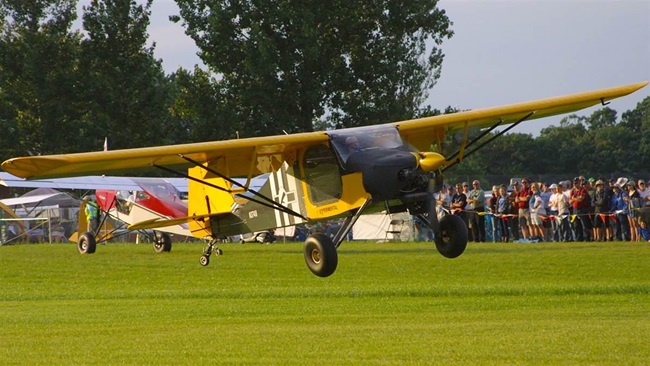